The millennials behind Isko Moreno Facebook Twitter Copy URL
Copied
There is no well-oiled public relations beast behind Isko Moreno. It's just a team of 8 millennials eager for him to go live.

Isko Moreno is live. Once again. He’s back out, roaming the streets of Recto, clearing the roads of illegal obstructions.

This is the usual flood of notifications that the Facebook page of Isko Moreno sends to the public as he broadcasts his every move. His posts have pulled in thousands of likes and shares, racking up views of up to 1.5 million.

The mayor is taking social media by storm. Is this the doing of a veteran public relations chief or an agency with tested political savvy?

No. It is just the 22-year-old Julius Leonen, the youngest department head of the Isko Moreno administration.

“It’s just me. People think we’re a well-oiled team. But we’re not. We’re not at all,” Leonen told me in an interview at a coffee shop across Manila City Hall on August 26.

Leonen is the chief of the Manila City Public Information Office, which has been mandated to tell Manileños everything about every public office in Manila. Their task has been outlined by Moreno’s first executive order mandating an “Open Governance” policy in the city of Manila.

“All procurement and bidding activities, contract signings, official meetings of the City Officers shall be streamed live online via Facebook and/or other social media platforms,” the document reads.

Isko Moreno has been outside the Philippines since August 24, and is set to return on September 1. With the mayor out of the country, Leonen had more time.

But he still had to continue the coverage. Our interview was punctuated by his continuous glances at his phone. Messages from Mayor Moreno. He wanted to broadcast live from New Zealand.

The Manila Public Information Office consists of only 8 people. None of them are above 30 years old.

Christian, 28, and Kyana, 24, take the viral photos of Mayor Moreno.

Kurt, 29, and Carlo, 23, plot and paint all promotion materials, remaining loyal to the white-and-blue branding of Asenso Manileño.

Jules, 22, the office manager, stands as one team in receiving and releasing documents.

Then Leonen has two information technology staffers: AJ, 25, and Nico, 27, who help brainstorm ideas and put up their broadcast sets.

They also have a volunteer group of 4 students aged 18 to 19 – Angel, Hannah, James, and Jannah – who help take photos and put up their sets for Mayor Moreno’s broadcasts.

Managing all of them is Leonen, a former journalist.

But this ragtag team of kids is behind the most engaged Facebook page of any politician in the country besides the President himself. As of September 2019, Moreno’s Facebook page lays claim to the likes of 1.6 million followers.

“Because we’re young, we get to use technology more. I am also happy working here,” said Kyana de Asis, one of the photographers.

For their office’s Facebook page, the Manila Public Information Office, Leonen just hoped to inch to 100,000 likers by the end of 2019. But by August, they had already reached 217,0000.

All of them were recruited by Leonen when he joined Isko Moreno’s campaign team in 2019.

Some of them, Leonen knew back in college at the University of the East. The others were referred by his former colleagues in the news industry. Together, they form a mobile team that follows Isko Moreno everywhere he goes, be it City Hall or a police operation against a cloaked gambling den.

On cue after each event, an Isko Moreno photo with a new quote or announcement printed over with thick text has to be released across Facebook and Twitter pages.

If the routine is akin to requirements from multimedia journalists, it is because Leonen was, in fact, a former journalist. Before graduating from the University of the East in 2018, he already worked for the Daily Tribune.

He then transferred to Inquirer.net as a multimedia reporter before he was pulled into Moreno’s circle prior to the 2019 campaign season.

“If you’re a PIO, you’re still a journalist. It’s just that you’re already a mouthpiece of the local government. There’s no sugarcoating there. The biases are clear,” Leonen said.

Midway through the interview, Leonen lifted his phone, an iPhone Xs with a matte navy blue case.

“You know what his machinery is? This phone. And they think that we have huge cameras, and many computers,” Leonen said.

The biggest problems so far that Leonen and his team have encountered in the field had little to do with what they would write and post, but rather with whether their data allotment in their phones could sustain a continuous Facebook live video.

Sometimes, they would even borrow power banks from reporters in the field just to keep the feed going.

“I think Isko Moreno is trying to find a way to connect to the young people. He knows he will not always have airtime so he’s going to use the broadness of social media to get his airtime,” said Sarmenta, who had lived in Manila for over two decades.

As the media blitz calms down, Moreno and his team know that their reach would diminish. As Sarmenta said, “there are other stories to file.”

That’s why the young mayor and his young team go live on their own channels as much as they can.

Where youth may fail 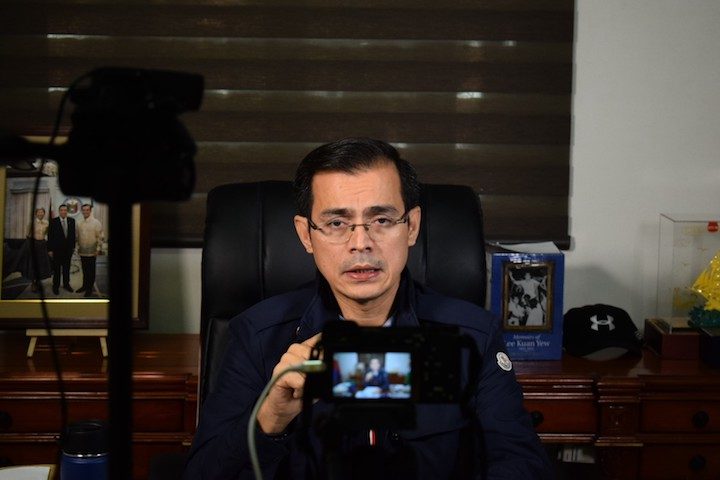 On August 14, crisis struck the team.

Moreno had a tooth infection, causing the right side of his face to swell. He had to get surgery – an operation he videocasted live – and go to work injected with a dextrose pack.

An employee from the Justice Jose Abad Santos General Hospital who assisted in Moreno’s check-up snapped a photo and posted it on his Facebook page, tagging Moreno in the post.

With transparency in mind as usual, the Manila Public Information Office shared the photo across all platforms. The post didn’t get the feedback they had expected.

While Facebook users flooded him with comments to take care of himself, Twitter users bombarded Moreno with criticism for what they saw as a public relations stunt.

“The people’s comments were that he was epal (going overboard) and he was trapo (being a traditional politician),” Leonen said.

The booboo led to a talk with Moreno, where they agreed to be more sensitive to the public’s pulse before posting.

“As a PIO we should only publish what is relevant and necessary,” Moreno said, recalling the conversation after the crisis.

But for Sarmenta, the true test for a communications team is not the self-inflicted crisis, but an external one.

Some examples: A typhoon, an earthquake, a bombing in a public market, a shooting in a concert, a deadly fire in the slums, a stampede – crises with body counts that put the most weight on the mayor.

In these extreme circumstances, would the Manila Public Information Office also continue going live with the same enthusiasm? Can Moreno maintain the same grace under pressure?

“There will be times where transparency will be challenged,” Sarmenta said.

It is in these boiler room scenarios, Sarmenta said, where it pays to have weathered senior communications officers in the team.

The closest figure who fits the description is Moreno’s chief of staff Cesar Chavez, the former transportation undersecretary for railways who dealt with almost daily disasters pertaining to the country’s train systems.

As Moreno’s main gatekeeper, Chavez has, at times, led the Facebook live broadcast, and has helped Leonen respond to inquiring reporters in the official media Viber group.

“He has been a big help. He’s like a father figure to the team,” Leonen said.

Dreams of the kids “All of our work is just the bare minimum. We haven’t yet achieved anything that we can say is our legacy,” Leonen said.

For Leonen and his team, the public is still adjusting to the experience of a “transparent government.” It’s a tacit swipe at the Estrada administration, which kept a hushed public information office.

“For the longest time, the Manila City government has not been this transparent. Before, people say that politicians are only felt when elections draw closer. But now, they can feel them from the beginning, and yet they’re still irked. They’re still adjusting,” Leonen said.

As things stand, Leonen’s team is already understaffed and underequipped.

So far, their schedules have been consumed by Moreno’s events only, leaving other Manila offices out from the promise of “open governance.”

For their Facebook live broadcasts, they make do with tables for their cameras and lights instead of using tripods. Their 4 computers were pulled from the Asenso Manileño local party campaign office. And their office driver, Alden, was only “borrowed” from the city security office.

According to Leonen, they have been scraping the communications office budget left by the Estrada administration, which he estimated to be P4 million for 2019. For the year 2020, he will ask for at least P8 million to hire and procure more.

With more people and better equipment, expect more live broadcasts from Isko Moreno and his team of millennials.