How poor is PH health system? Many hospitals not qualified to test for coronavirus 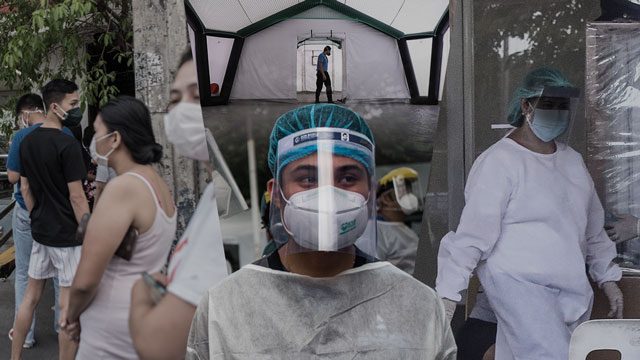 Facebook Twitter Copy URL
Copied
The national government didn’t immediately see the need to accredit qualified laboratories to test COVID-19 samples right after the first case was reported. There was failure to think ahead.

MANILA, Philippines – One month into the lockdown of Luzon and key cities nationwide, the government announced it was about to ramp up testing for the novel coronavirus disease from 3,000 to 8,000 tests a day to be conducted by 17 accredited testing centers.

It’s been a marked improvement from the woeful 300 tests a day the country could do in the early weeks of the outbreak with one laboratory testing all the samples.

Yet the government target was still nowhere near South Korea’s enviable capacity to conduct up to 20,000 tests a day which it was able to launch as soon as it recorded its first cases. The East Asian country that has a population about half as big as the Philippines’ 110 million is seen as a model for the world for keeping the virus at bay without needing to impose a strict lockdown.

Mayors from Metro Manila, epicenter of the coronavirus outbreak in the Philippines, did try to copy South Korea’s strategy. But it was easier said than done.

In Valenzuela City, Mayor Rex Gatchalian was disappointed to learn the city could not do local testing.

“My first instinct was to build a lab, but they told me I didn’t have the luxury of time. ECQ na ‘yun (We were already under enhanced community quarantine). My second instinct? Commandeer labs here in Valenzuela. Walang papasa. Hindi na namin pina-apply sa DOH (None would meet the standards. We discouraged them from applying with the Department of Health),” said Gatchalian.

There are 4 tertiary hospitals with existing laboratories in the city. But even the Valenzuela Medical Center, a DOH hospital, failed to meet requirements for conducting the complex polymerase chain reaction (PCR) testing of suspected COVID-19 cases. A laboratory is required, among other things, to have certain biosafety levels and trained staff to handle live viruses without risks of a laboratory disaster.

“Akala ko noon, basta may PCR [machine] at isaksak ko ang kit, aandar na. Hindi pala ganon,” said Gatchalian. (I used to think you only needed a PCR machine and plug the kit to operate a testing facility. It’s not that easy.)

The city was still among the first to conduct “localized targeted mass testing,” but it was a lot of work going there.

“That is the state of our health system,” said Manuel Dayrit, the country’s health secretary during the SARS outbreak in 2003.

Testing is just one of the challenges that the coronavirus pandemic has posed on the government.

“Have you been to our government hospitals? You are talking essentially about government capacity. Even the state of some of our facilities, not to mention the labs, it’s very primitive. It’s a problem that should have been addressed years ago. Hindi nagawa (We weren’t able do it),” said Dayrit.

Not one lab under BARMM

If it’s bad in the capital, it’s worse in the provinces. Out of 17 laboratories accredited so far by the DOH, only 5 are outside Metro Manila. They’re in the cities of Baguio, Bicol, Iloilo, Cebu, and Davao.

Many laboratories across the country are still trying to meet DOH requirements. Provinces that have kept their cases low so far are afraid there might be undetected cases.

In the Bangsamoro Autonomous Region in Muslim Mindanao (BARMM), Health Minister Saffrullah Dipatuan inspected all the hospitals under the jurisdiction of the new autonomous government in the early weeks of the outbreak. He discovered that none could qualify for testing.

The region had several reasons to fear a coronavirus outbreak. It had initial problems tracing attendees of a religious gathering in Malaysia that was linked to a cluster of cases abroad. BARMM residents were among the relatives of the first cases of local transmission in San Juan, among the attendees of cockfight derby in Davao City that was linked to at least 11 deaths, and among the those who returned from Sabah.

The region’s most advanced hospital – Maguindanao Provincial Hospital – qualified as referral hospital for COVID-19 but not for testing. It’s a secondary hospital.

BARMM eventually funded the Cotabato City hospital laboratory, which had been inspected by the DOH but still required a few renovations. It required a lot of work and a lot of explaining to constituents why the regional government didn’t fund one of its hospitals instead.

The region has 9 confirmed cases as of April 20, but there are fears there might be undetected cases. It is a challenge particularly in Basilan, Sulu, and Tawi-Tawi (BaSulTa). The island provinces, which are far away from Cotabato City, need to test over 100 suspected cases.

Residents are particularly scared in Sulu because 3 suspected cases died without getting tested.

BARMM looked to Zamboanga City for help, but even the city has yet to have its own testing center. The Zamboanga Medical Center didn’t qualify to test samples, although local authorities are optimistic that a PCR laboratory operated by the local office of the Department of Agriculture will pass.

“If you compare us with South Korea, we are in the caveman days of testing. We are in the primitive stages,” said Dayrit. He cited the turnaround of about two days for most of the PCR tests, which can take longer given delays in transport and other issues.

In worse cases, the turnaround time could reach up to 3 weeks.

In comparison, Dayrit said, South Korea can do PCR tests in 2 to 3 hours and has set up drive-thru testing centers to reach as many people as possible. Mass testing is also coupled with the capability to quarantine residents who test postive.

South Korea learned from the 2015 outbreak of the Middle East Respiratory Syndrome or MERS, said Dayrit.

“Many of their private companies went into producing PCR tests. Even the government promoted it. I was in a webinar where the South Korean government had some of their experts speak. What I gathered there is many of their doctors started specializing in molecular biology,” he said.

Observers, mayors among them, criticized the national government’s failure to develop the country’s testing capacity during the one-month lull between the first confirmed case on January 30 until the first reported local transmission in San Juan on March 6.

“Lahat na ’yun (It’s all these factors combined),” said Dayrit. “First of all, at the time, they didn’t see any need. We were able to control SARS with one laboratory. That was a long time ago. This is really about forward thinking and planning. Hindi nabasa (There was failure to think ahead),” he said.

The country’s cases exploded after March 6, prompting President Rodrigo Duterte to impose lockdowns in Metro Manila beginning on March 15, and then the entire Luzon beginning March 17. Local government units in the Visayas and Mindanao followed suit.

As of April 21, as the first local government units are just launching “localized targeted mass testing,” the country already had 6,599 cases, including 437 deaths.

But local officials continue to demand more, calling for true mass testing as concerns grow over asymptomatic cases, who may not be included in the national government’s criteria for testing. The Philippines relied on a single laboratory in the early weeks of the pandemic – the understaffed Research Institute for Tropical Medicine (RITM) in Muntinlupa – which took time to expand its capacity from 300 to 1,500 tests a day.

RITM began accrediting other laboratories only during the ECQ. It has been a slow process that frustrated many mayors, who wanted to identify and isolate confirmed cases immediately.

Marikina City, which recorded an early cluster of cases, announced even before the ECQ that it was building its own testing facility in cooperation with Manila Health Tek Inc, the firm that manufactures the local test kits developed by scientists from the University of the Philippines (UP).

The DOH hospital in Marikina, the Amang Rodriguez Memorial Medical Center, was assigned as a referral hospital but it did not meet requirements to test specimens.

Building a new facility proved to be a frustrating endeavor for Mayor Marcelino Teodoro, however. He had to find a new building when the first location of the city’s facility was rejected by the DOH, and then had to contend with repeated delays.

The facility was expected to start testing on Tuesday, April 21. Health Secretary Francisco Duque III called it “one of the best laboratories I’ve seen.”

Valenzuela City took a different approach as it dropped plans to build a test center.

Like many mayors, Gatchalian immediately reached out to the first companies selling test kits that were accredited by the Food and Drugs Administraiton. The problem was where to process the kits.

“We made reservations for 1,000 kits per week. We can do the swab and get the sample, but where do we bring them for processing?” said Gatchalian.

The city started calling DOH-accredited laboratories. All of them were government hospitals at the time, which were swamped with samples coming from the DOH. It won’t do.

“We needed a secondary path. We found there were private hospitals with laboratories that were in different stages of being accredited,” said Gatchalian.

They reached an agreement with The Medical City in Pasig, before the hospital even completed its accreditation, to process 25 samples from the city a day. “They have their own clients and they also want to entertain other LGUs like Pasig, their home city. They could only give us 25 a day, which was okay. The turn around time is two days compared with RITM which could take 6 to 8 days,” said Gatchalian.

Last week, Valenzuela also entered an agreement to test 90 samples a day with Detoxicare Molecular Diagnostics Laboratory in Mandaluyong City. The stand-alone lab was among 17 total laboratories DOH has accredited so far.

As of the weekend, Gatchalian said they had completed testing for 570 persons under investigation and under monitoring for the disease, based on the old DOH categories for patients. (READ: Suspected, probable, confirmed: DOH uses new categories for coronavirus cases)

The province was able to tap the laboratory of De La Salle State Health Sciences Institute (DLSU-HSI). Governor Jonvic Remulla geared up for mass testing as soon as the province completed 4 of the 5 stages of accreditation.

Cavite started its testing on April 14, and exactly a week later had covered 80% of the persons under investigation for the virus.

The governor said frontliners would be tested next, part of a big strategy to protect the province as it studied options to reopen its economy. While Gatchalian welcomed faster government accreditation of testing labs, there were also concerns about the learning curve of staff and the quality of the tests conducted in these newly accredited laboratories.

Dayrit said these need to be monitored, too. “We’re acclerating the process because the capacity is so weak. That’s where we are,” said Dayrit.

When it’s all over, Dayrit hopes the coronavirus pandemic will make the government realize it cannot neglect the country’s health system anymore.

“Over the short term, we just have to improve on whatever system we have and live with the fact that they’re very poor. Hopefully, if this is over, people will have the right sense and the right foresight and the right priorities to start investing and redesigning the system,” Dayrit said.

Raul Destura, the scientist behind the locally developed test kits, said UP was taking the first steps toward training pathologists nationwide for a future pandemic. Their experts will provide full technical support to laboratories that will use their kits.

“They will be empowered. They will get used to it and will rely less and less on technical support. The advantage here is they will develop capabilities for this method. Epidemics will always happen in this world, right?” Destura said.

It’s going to take more to improve the country’s health system, but it’s a start. – Rappler.com