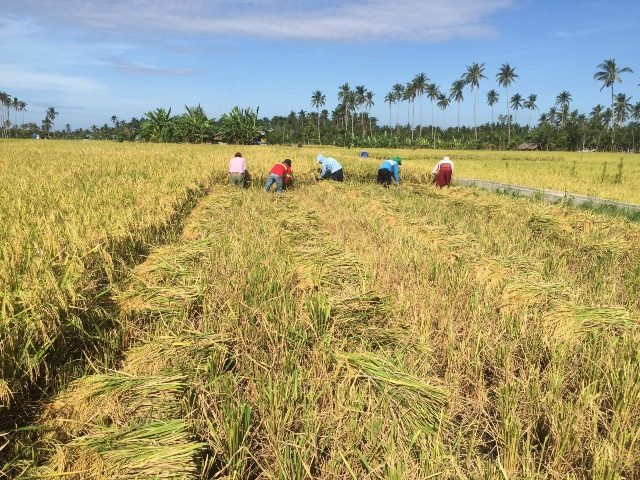 MANILA, Philippines – The harvest season is when the fruits of one’s labor are rewarded. This year, however, that season has meant the opposite for Quezon province farmers.

Wet-season palay (unhusked rice) is harvested starting December in Southern Luzon. But with the law liberalizing rice imports, it has become harder for palay farmers to earn a profit from their main crop. In 2019, the Philippines was the world’s top rice importer, significantly bringing down the rice of palay to as low as P7 per kilo, much lower than the cost to produce it at P12 per kilo.

Quezon province farmers looked forward to summer to offset their losses. Several had invested – through loans – some P40,000 worth of capital in watermelon, a fruit in-demand during the dry season. With the extreme quarantine protocols in the province, however, some farmers have been told to stay home, despite the national government’s policy to let agricultural work remain unhampered.

At the opposite side of Luzon, small fishermen are struggling to make ends meet. In Culion, an island 287 kilometers north of Palawan’s capital Puerto Princesa City, the drop in tourism-driven demand for seafood has made the fisherfolk’s struggle to sell dozens of kilos of catch tougher.

This is the current normal, as the Philippines races against time to beat the coronavirus disease. Economists suggest that government invest more in agriculture, in a bid to create more jobs.

It was business as usual for Jun Pascua in Infanta, Quezon, when the Luzon-wide total lockdown was implemented on March 17.

A week later, he was told farmers could no longer go out of their homes, nor till their land. This ban was further exacerbated by the “extreme” quarantine policy of the Quezon provincial government which started on April 9.

In an April 8 executive order signed by Quezon Governor Danilo Suarez, strict home quarantine was the declared policy. Medical frontliners and cargoes were allowed unrestricted movement, but there was no explicit mention of allowing agricultural work.

Residents go out of their homes once a week in the town where Pascua lives. For their barangay, it was during Fridays. But the extreme protocols left his vegetables wilted. For the dry season, Pascua had planted corn, squash, and green beans (sitaw): “Ang laking kapabayaan sa aming bukid.” (It’s a huge neglect of our farms.)

(How did the government think about this? These strict policies coincided with the crucial harvest season where palay and vegetables are about to ripen. We should be able to tend our farms every day.)

He added that some farmers in Real and General Nakar have experiences identical to his, based on the reports he got from the field.

For Quezon province farmers, dry season crops are their “pambawi” or what they expect to bring more profit to offset their little-to-no income from the December palay harvest. Pascua said that many farmers had invested in watermelon during the dry season because of the expected high return.

(Farmers are weeping because watermelons are for the summer season. This was supposed to offset their low profit from palay during the month of January. There are some traders who buy in bulk or bring these to Divisoria. That was interrupted because they were not able to irrigate the farms.)

(We slide further to poverty. We will have to loan again after this, so we have debts of around P80,000 in total. It’s hard to bounce back from this.)

The case in parts of Quezon is unique, as other areas are allowed unhampered agricultural work. The main problem they face is the mounds of decaying vegetables they could no longer sell because of strict lockdown rules. (READ: Farmers trash spoiled vegetables while poor go hungry)

There’s catch but no one wants to buy

In Culion, a rising tourism destination in Palawan, fisherfolk are scrambling to sell their catch. Cris Guttierez, a fisherman in the town, said that before the pandemic hit the country, he could sell matang baka (cow-eyed scad) for at least P90 per kilo. Now it’s down to P50 a kilo.

On average, Guttierez said that they were able to get around 40 to 50 kilos of fish when they set sail. The first time they did during the lockdown, they brought home 100 kilos of matang baka. On Monday night, April 28, they caught 5 kilos only.

But there’s just no market for it. Guttierez used to supply fish in Coron, another popular tourist site in Palawan, but he couldn’t sell it anyway because of the absence of demand. Coron and Culion are first and foremost fisherfolk communities – before tourists got wind of their pristine sites.

“Dito sa Culion, lahat mangingisda. Kahit dalhin sa ibang lugar, ganun din naman ang pamumuhay nila. (Here in Culion, everyone is a fisherman. Even if you bring them to other places, they will still have the same livelihood),” he said.

The low sales also pushed Guttierez not to venture out into farther seas. Before the quarantine, he and others would sail for two or 3 hours to catch alumahan (long-jawed mackerel) or mamsa (trevally). Now it’s just all matang baka since it takes only 30 minutes to get to where they are spotted.

On the 3rd week of April, the Culion municipal government bought the fisherfolk’s catch as part of their relief packs to residents. Guttierez said they bought enough for two days only and that was it.

Guttierez is still grateful for the local government though, as they receive relief packs weekly. “Kahit papaano nasusuportahan kami.” (We get government support howsoever.) Some local governments, such as Sorsogon, Nueva Ecija, and Pililia town in Rizal, have started buying fishermen’s catch during the quarantine to help them. But it really depends on the local officials, Pablo Rosales, PANGISDA-Pilipinas president, told Rappler.

Small fishermen in Metro Manila have found it hard to sell their catch because of the strict quarantine protocols that prevent them from crossing boundaries.

“Ang sabi, hindi dapat pagbawalan at pigilan ang daloy ng produkto. Hindi naman iyon ang actual na nangyayari sa baba,” Rosales said. (They said that the movement of goods should not be banned nor stopped. But that’s not what’s happening on the ground.)

Rosales suggested that barangays consolidate their catch within their jurisdiction, as some consignees won’t accept low volume of catch from small fishermen. This, he said, would help facilitate the selling of fish to other areas.

(They are really strict, that’s why some fishermen would rather dry their catch in their backyard. That’s why our call is for them to buy and collect the fish because they have the capacity. And of course, they should buy the fish at a competitive price.)

Agriculture Spokesperson Noel Reyes acknowledged that small-time traders have found it hard to cross provinces because of the strict quarantine protocols.

The national government had suggested that local officials buy directly from farmers and fisherfolk, which some of them have already done.

With the lockdown in place, the revived Marcos-era Kadiwa program, which directly sourced agricultural products from food producers, got more stalls and mobile stores around the country. It went online earlier in April.

“It has come to our consciousness that we should really buy directly from our farmers. And now more than ever, urban agriculture is being highlighted,” Reyes said. The DA recently intensified its promotion of backyard and rooftop planting by distributing vegetable seeds and planting materials nationwide. With the Bureau of Plant Industry, the DA gave out assorted seed packs of eggplant, tomato, upo, sitaw, okra, kangkong, pechay, and onions, among others.

The national government is providing P5,000 in aid to small fishermen and farmers who till lands less than a hectare. This is part of the existing Financial Subsidy to Rice Farmers, which aims to cover 24 provinces that were not part of the initial Rice Farmers Financial Assistance program. RFFA started in 2019, covering farmers who plant two hectares or less who were affected by the Rice Tarrification Law.

Reyes said on Wednesday, April 29, that RFFA has disbursed cash aid to about 582,000 farmers so far, while FSRF has released assistance to more than 244,000 beneficiaries.

The DA has also recently issued a memorandum that orders the distribution of seeds and fertilizers to farmers during wet season-planting. Small farmers and fisherfolk can also avail of a P25,000-loan from the government at zero interest, payable up to 10 years.

Land rights network Katarungan did not agree with the DA’s guidelines excluding farmers who till more than two hectares. Danny Carranza, Katarungan secretary-general, said that the department should’ve looked at the status of farmers who breached the land size limit.

(Regardless whether they plan rice or coconut, one hectare of land is negligible. The government should assume that farmers have long been running on deficit. Not because a farmer has two hectares of land, he is rich.)

“How could we keep up with the wheels of production if the agriculture department is slow-footed in delivering the essential livelihood and economic support to the food producers?” Hicap asked.

Many small farmers are pushed deeper into poverty, Carranza said. But he added that if only the government had invested in agriculture, not all farmers would be desperate to seek for aid.

In an April 27 policy brief, economists Jerik Cruz and Marjorie Muyrong suggested that the government should place strategic investments at a time when the end of the pandemic is still uncertain, to ensure food supply to households.

Congressmen have started tackling the economic stimulus package, with proposals amounting from P370 billion to a whopping P1.65 trillion.

In their analysis, Cruz and Muyrong found that injecting P1-billion worth of investments in different agricultural sectors could potentially bring thousands of new jobs among the poor.

Under the Department of Labor and Employment’s estimates, more than 2 million Filipinos either lost their jobs or are under a “no work, no pay” scheme.

Based on their computation, an average of 16,000 jobs can be created in the agricultural sector per bilion-worth of investment at best, unless lockdown policies dampen the projected multiplier effect. The January 2020 Labor Force Survey showed there are 9.68 million agricultural workers around the country.

As coronavirus cases continue to rise, Pascua and Guttierez are not confident they would return to “normal” once total lockdown measures are downgraded. Palawan, among other provinces, will be under the eased “general community quarantine” starting May 1.

But what’s clear for Pascua is that the government has finally realized their value in the economy, although belatedly.