May 21, 2020 10:30 AM PHT
Ralf Rivas
Facebook Twitter Copy URL
Copied
The coronavirus pandemic unmasks yet again the abusive relationship between the police and prostituted women. Local governments have not been of much help. 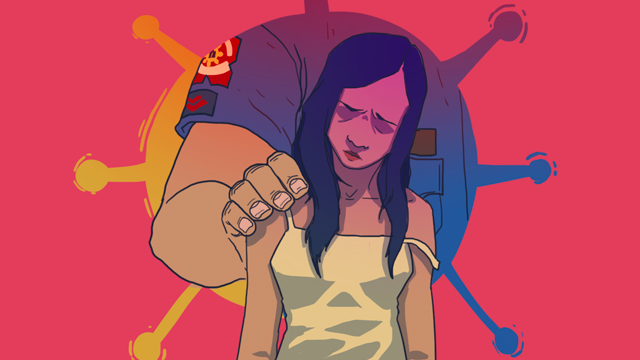 MANILA, Philippines – The police and prostituted women have a long, toxic history in this country. But the coronavirus pandemic has made it much worse for the women.

Armed with a gun, and now with more stringent rules at their disposal, some policemen have coerced their way to get what they want from Filipino women who are forced to sell their bodies to survive.

As the lockdown dragged, these women – and men – were left with little choice but to give in to their armed tormentors.

Here are some of their horrifying stories.

Sex in exchange for a pass

Marivic* and her family were down to their last kilo of rice and can of sardines, and the barangay showed no signs it would be giving another bag of groceries.

Since the start of the enhanced community quarantine (ECQ) in their town just several kilometers away from Metro Manila, each household was given only around 5 kilos of rice and several cans of sardines.

Desperate for cash, she walked several kilometers for over two hours until she reached a small tent with some policemen and a familiar face. It was Andres*, one of the first policemen who gave her cash for sex when she was still a teenager.

Their first encounters were straightforward. But after several years, he replaced cash with threats of arrest to have sex.

Marivic knew Andres would not let her pass unless she gave him what he wanted. So she had to once again strip down and submit to Andres just to provide for her family.

Andres drove her back to her house to be raped. “Nakakahiya pero desperado na talaga ako noon eh (it’s embarrassing but I was really desperate at that time),” Marivic told Rappler.

After the rape, Andres gave her a loaf of bread and P150. Then he offered her a ride to get to her customer.

This was their arrangement during the lockdown: trading sex for an ECQ pass plus transportation.

Marivic said other prostituted women also had a similar arrangement with Andres and other policemen.

“Kung hindi sex, aabutan namin sila ng porsyento. Masuwerte na ang iba na kaibigan nila ang pulis, tulong na lang (if not sex, we give them a percentage of what we earn. Some are lucky because they are friends with the police, it’s their own way of helping),” she said.

Their male customers also slashed the money they paid them during the lockdown.

From the usual P2,000, some men would give them just P300 to P500 per session. Marivic said other customers would only tell them about the reduced fee after sex, leaving them more distressed. 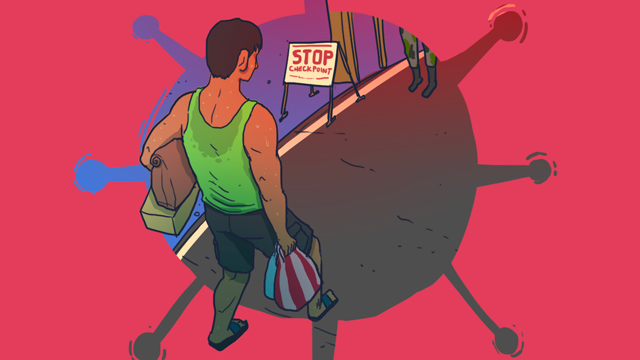 The house with no family

“Hello kumusta ka na, sir? Baka puwede mo kaming bisitahin ngayon…pamasahe ka muna, pantawid gutom lang. Suporta lang po, please.” (How are you sir? You may want to visit us today…get a massage so we could get past our hunger, just a little support, please.)

Randy* sent a text blast to all the usual clients of his spa somewhere in Quezon City.

He, along with about 10 men he “manages,” has been holed up in a house since the lockdown. Beside the house is an apartment with women also forced into prostitution.

Randy prides himself with having some of the “best-looking” men and women, satisfying the sexual needs of Manila’s upper-middle class and elite. But after the lockdown in Metro Manila, the popular brothel was forced to turn off the red light.

It did not seem to be a problem in the first few weeks. But when the lockdown got extended, they started texting regular clients to fetch sex workers from the brothel.

“Nandito lang sila pili lang kayo, hindi sila nakauwi ng probinsya nakatambay lang dahil sa [COVID-19],” Randy texted his usual clients. (They are just here, you can choose whoever you like. They were not able to go home to their provinces because of COVID-19.)

Randy told Rappler they found it hard to get relief goods and cash assistance from the barangay, since they are not considered a household of families.

(Let’s not kid ourselves, they don’t think highly of us because of what we do. At first it was alright, we expected nothing. But we did not expect the pandemic to last this long, and of course our food supply has run out.)

They were eventually given groceries by the barangay, but only after getting into a scuffle with officials and insisting that one of the women there is raising a toddler. (READ: ‘Walang wala na’: Filipinos fear death by hunger more than coronavirus)

“Binigyan naman kami nitong Sabado lang, pero grabe talaga ‘nung una… yung isa dito, si Jasper*, naglakad pa nang napakalayo para lang mapuntahan ang isang client kaya may pera kami ngayon,” Randy said. (They gave us groceries just last Saturday, but it was really hard at first. One of the guys here, Jasper, walked for miles just to get to one of the clients, and that’s why we have some cash now.)

Rose* said that if not for her boyfriend Jasper and the other prostituted men, her 3-year-old boy would go hungry.

She also worries about her mother who has kidney problems. Rose said her mother has not seen a doctor since the start of the ECQ.

“Kung puwede lang sana ako lumabas at maglakad din papunta sa customer eh, pero may inaalagaan akong anak (If only I could go out and walk to meet a customer I would, but I have to take care of my child),” Rose said.

When asked whether she’s afraid that Jasper would contract COVID-19, Rose simply said, “Bahala na.” (Come what may.)

Jasper was able to meet clients, since his other job as a restaurant staff made him eligible for an ECQ pass. While he found it easy to go in and out of checkpoints, he was forced to reduce rates just for clients to say yes.

From the usual rate of P5,000, he agreed to have sex for P2,000. His money would then be pooled with what the other sex workers earned to provide for the needs of the brothel. 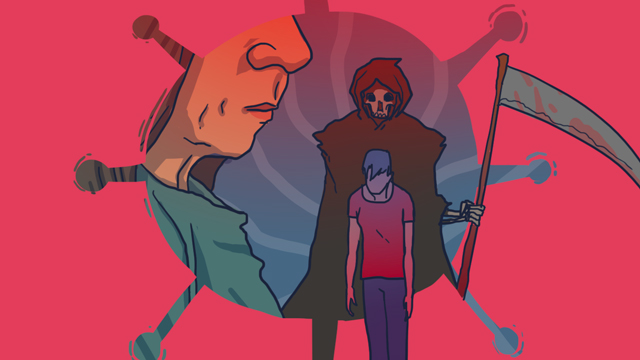 Death by hunger or coronavirus?

Survivors of sex trafficking have been among the most disadvantaged people – even before the pandemic.

Jennifer*, 40, who has been helping HIV-positive women like her, told Rappler that the crisis has made it doubly difficult for them to get government relief and health care.

“May mga gamot kami na iniinom, pero dahil lockdown, talagang pahirapan talaga. Ginagawa na namin ang lahat, may organisasyon naman kami kaya kinakaya namin,” Jennifer said. (We have medicines to take, but it’s harder to get them now because of the lockdown. We have been able to survive because we belong to an organization.)

If not for her organization, the Coalition Against Trafficking in Women-Asia Pacific (CATW-AP), she said exploited women in her community would have suffered even more during the pandemic.

“May isa sa amin na sinubukang magpakamatay na kasi hindi na niya alam paano pa bubuhayin ang mga anak niya. Napigilan namin at nabigyan ng pagkain, hindi kasi naaabot ng barangay,” Jennifer said. (One of our members attempted to take her own life because she couldn’t feed her family. We were able to stop her and gave her food, since the barangay has not given her any.)

Jaida*, another member of CATW-AP in Bulacan, fears the crisis may force women back into prostitution.

(I just sell vegetables now, I don’t want to go back to prostitution. But I would also understand those who will go back. I think those who will return will find it hard because people are afraid of the coronavirus.)

Sex workers or survivors of prostitution?

The pandemic further complicates the issue of how to protect people engaged in sex for cash. Feminists and women’s groups themselves have had differing opinions on this subject long before the crisis.

One group views prostitution as an economic problem that must be addressed and eliminated. Another recognizes that some are trafficked or merely forced into it. And there are those who consider sex work as legitimate business, which caters to a market that exists in any society.

All agree that government has pushed people in the sex trade further into the sidelines.

Enriquez expressed outrage at how the pandemic unmasked once again the abusive relationship between the police and prostituted women.

“These women, people, need regular, decent jobs. Let us not normalize the abuse, no one wants to be used on a daily basis,” Enriquez said.

To lift people out of prostitution, government has to offer better jobs, take a participatory approach in implementing the fiscal stimulus package, and give priority to marginalized women, she added.

For sex work advocates like Mara Quesada, executive director of Action for Health Initiatives, Inc, conversations on decriminalizing prostitution should begin now to protect people in the industry.

Quesada admitted that the Philippines may not be ready for the legalization of sex work, but pointed out that if it were legalized, sex workers would be qualified for cash aid from government.

“The problem is we have a very confused policy in relation to enforcement because under the Revised Penal Code, it is still illegal…I want to make it clear that there are those who are forced into it, and we don’t want that,” Quesada said.

But there are also women and men who want to be acknowledged and protected for the kind of work that they have chosen.

“There are those who feel that they do not need to be rescued and they want recognition for their work,” Quesada said. “So that it will be regulated and there will be a safe environment for them and they can report those in power, like policemen, who abuse them.”

But while that debate rages among advocates, the abuse goes on. – Rappler.com

*Names have been changed to protect sources.