On their own: Commuters and the looming transportation crisis in Metro Manila

May 29, 2020 5:00 PM PHT
Aika Rey
Facebook Twitter Copy URL
Copied
More commuters are seen to shift to alternative modes of transportation, as the capacity of public transportation will be reduced come GCQ

PART 1 | Will public transportation be enough once Metro Manila is placed under GCQ?

Starting Monday, June 1, Metro Manila will shift to a more relaxed general community quarantine (GCQ). Majority of industries will open up again and public transportation will resume in phases.

But it’s not business as usual. Trains, point-to-point buses, taxis, and transport network vehicles will operate starting June 1, while other modes of transportation such as public utility buses and modern public utility vehicles (PUVs) will hit the road starting June 22. The capacity of PUVs will be halved while railways will operate at a little over 10% of their original capacity.

Experts expect that there will still be crowding – not inside the PUVs, but out in the streets, as commuters wait or queue for a ride.

Fearing infections, more commuters are also seen to shift to alternative modes of transportation. But will the government prioritize their safety too?

In a late night television address on May 12, President Rodrigo Duterte placed Metro Manila, Cebu City, and Laguna under modified enhanced community quarantine (MECQ) from May 16 to May 31.

After appeals from local officials, Cebu City and Mandaue City remained under ECQ, while Bataan, Bulacan, Nueva Ecija, Pampanga, Zambales, Angeles City, and Bacoor City were added to the MECQ list. The rest of the country is under GCQ during the same period.

The day after the President’s announcement, Bea* was informed by her manager that she had to go back to work the following Monday, May 18. Bea works in a big corporation in Las Piñas City.

The labor and trade departments has repeatedly said in the past that employers should provide a shuttle for their workers, otherwise they can’t force an employee to go to work.

But Bea’s employer couldn’t provide a shuttle because of the costs. She was troubled, to say the least, as she lives in Bacoor, Cavite and does not own a car. Like thousands of Caviteños who work in Las Piñas, she took the jeep going to work.

Bea, along with two of her colleagues, decided to bike to work come May 18. They purchased bikes online worth P4,250 each. On her first day of bike commuting, she hit the road around 5 am for the 11-kilometer ride.

Halfway into it, her front tire got busted, no thanks to the unforgiving Las Piñas road. She had to pedal with a soft tire for the next 5 kilometers and reached the office 15 minutes before 8 am.

(We were nervous because we really didn’t bike to work. We only decided to do this because of the situation. It was disappointing that the employers couldn’t provide for a shuttle, but I understand because employees live far from each other. But it’s still better if they provided for one so it’s not as difficult as this.) 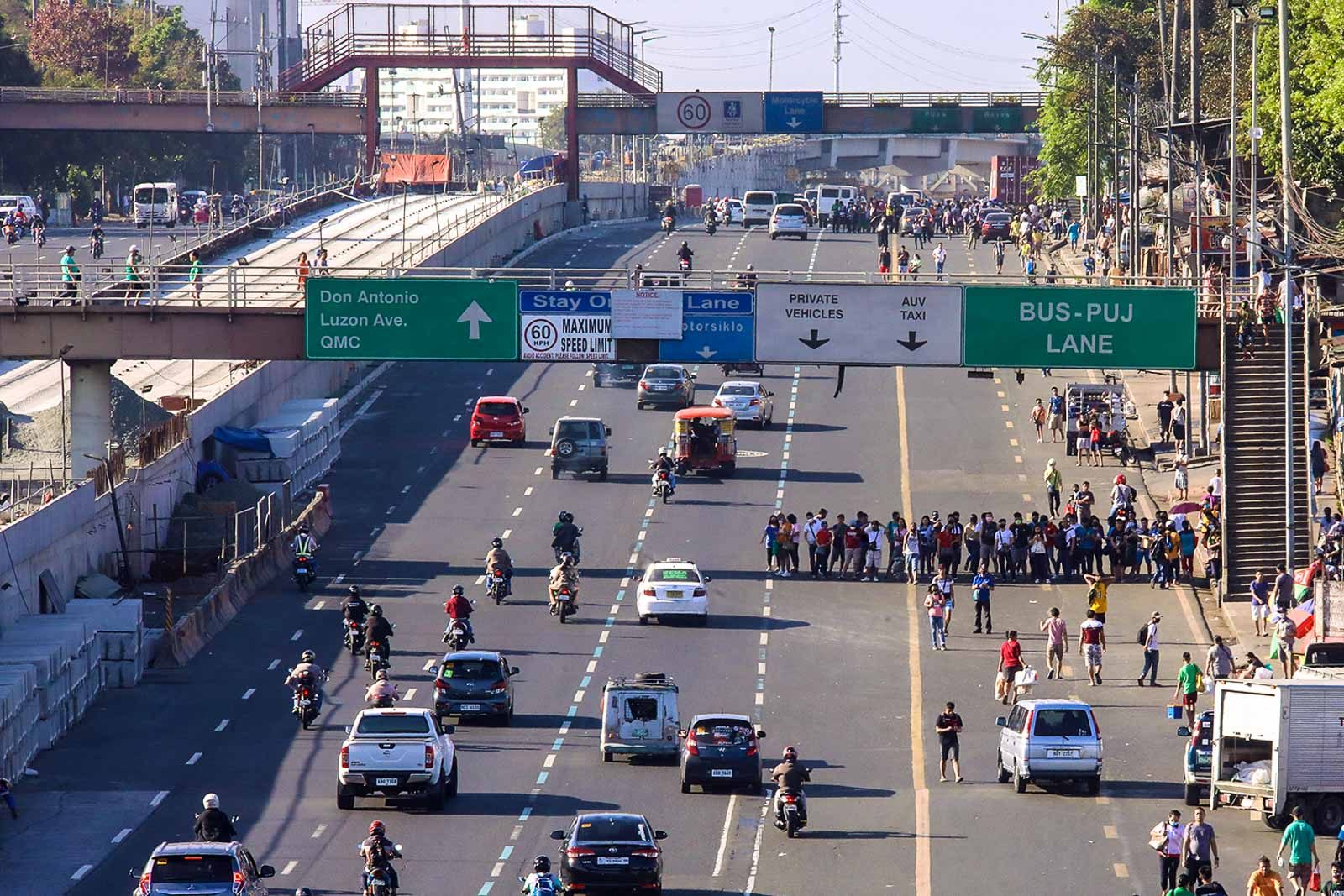 On the other side of the metro, Jennylyn delos Reyes walked for an hour every day from her Navotas home to the Malabon fish market. Sometimes, it would take her an hour and half if the police prohibit her from crossing Malabon Bridge. Jennylyn sells dulong (silverfish).

Her partner has a motorcycle, but backriding was banned by the Inter-Agency Task Force – even as local officials asked the national government to grant couples an exemption.

So Jennylyn walked, even if she finishes work at the late hours of the night.

If commute pre-coronavirus was already bad, what more during GCQ when the capacity of public utility vehicles and railways will be reduced?

Transportation officials said they were expecting a mere 30% of Metro Manila commuters to be back for work during GCQ. This is equivalent to roughly 3 million people.

The Department of Labor and Employment has also issued guidelines on work resumption, strongly encouraging businesses to impose alternative arrangements such as working from home.

Compiled data from the Land Transportation Franchising and Regulatory Board showed that there are some 4,600 buses, over 40,000 jeeps, and close to 10,200 taxis in the capital region as of June 2019. LTFRB had also previously set a cap on trasport network vehicle services at 65,000 in the metro.

Theoretically, transport economist Jedd Ugay said that the current PUV fleet can service the 30% demand. But he asked, “What if there would be more commuters and less PUVs?”

“It is not simply 50% reduction in supply due to 50% seating capacity, we don’t know if pre-COVID number of PUVs and trips will return,” Ugay said. In a forecast by the Move As One Coalition, which Ugay is a part of, the group of transport experts and advocates estimated that 4.98 million public transport trips will be needed daily if 50% of the former travel demand returns during GCQ. This is half of the pre-coronavirus demand at about 10 million.

Out of the 4.9 million public transport trips, the group estimated that half, or 2.49 million, will suffer from additional travel time of one hour per trip due to insufficient public vehicles. The other half will have a 10-minute travel time increase because of the worsening traffic congestion brought by more private vehicle use.

A railway official had the same assumption on longer commute time early May. Metro Rail Transit Line 3 operations director Mike Capiti previously said that waiting time outside stations might be around “two to 3 hours,” coming from an average of 350,000 daily ridership pre-lockdown.

So where will commuters go? Ugay pointed out that there will still be volume somewhere else, even if commuters inside public transportation are reduced.

“Before COVID-19, the 50% seating capacity was not yet in place and yet PUVs were already packed. There will still be crowding one way or another. It will manifest on the road, or at the queues, or at PUV stops,” Ugay told Rappler.

“If the government ensures the sufficient amount of public transportation, then people may be able to comply with the physical distancing policy,” he added.

Because of the lack of mass transportation and the fear of getting infected, Ugay said many commuters have started shifting to “active transport” such as biking or walking.

Around the globe, more people are biking. The World Health Organization encouraged the shift, as it promotes physical distancing and exercise.

When Metro Manila was placed under lockdown, bike shops became busier than they were pre-ECQ – with some sellers bringing their businesses online. (READ: Manila Moves: Cycling through the metro’s traffic)

Unbranded bikes online cost some P3,000 to as much as P6,000, depending on the make. Folding bikes – particularly those called “Japan surplus” – have become increasingly popular in the Facebook marketplace, along with pricier electric scooters.

When bike shops resumed operations under modified ECQ, people started lining up outside shops in Quiapo.

Expecting that more people will shift to bikes as primary mode of transportation, the progressive young transport planners in Pasig City started the so-called “pop up lanes,” which use traffic cones and barriers to protect bikers during their commute. A permanent lane is also in the works. The pop up bike lane initiative was replicated by the Metropolitan Manila Development Authority (MMDA) along White Plains Avenue to Boni Serrano Avenue in Quezon City for a trial run on May 24. But the cones were removed later in the afternoon.

Transport planner Robert Siy Jr said that bike lanes are “an absolute necessity.” He added, “Bike lanes are not just a ‘nice to have’ option. Given the huge numbers of people who will have no option except to walk or cycle, we need to make sure these non-motorized travel modes will be safe and convenient.”

“It is at times like this when the concept of a metropolitan authority proves its worth. MMDA should demonstrate its forward thinking and contingency planning in our crisis situation,” Siy added.

Rather than implementing short-term interventions, MMDA seemed to be geared towards the construction of protected bike lanes – which will take time.

MMDA Assistant Secretary Celine Pialago said that cones and constables “won’t be enough” to protect bikers, while EDSA traffic czar Bong Nebrija said in a TV interview that the metropolitan board wants an “elevated bike lane.”

So far, the Asian Development Bank-funded EDSA Greenways project will have elevated walkways and bike lanes built along the main thoroughfare. Construction will start later in 2020 and partial operations are eyed by October 2021.

The Department of Public Works and Highways also pledged to build more bike lanes across the country, incorporating this with new infrastructure projects. In February 2019, DPWH opened a protected bike lane along the Laguna Lake Highway.

The Department of Transportation also proposed to MMDA that the agency allot one EDSA lane for pedestrians and bikers.

On Thursday night, May 28, Transportation Secretary Arthur Tugade said that an “experiment will be conducted.” He said in a mix of English and Filipino, “If it’s proven that bike lanes work, we will make the structure permanent, not only in EDSA, but around the country.” Without any quick interventions from MMDA, bike commuters will have to pedal on the side of national roads, or use the current “bike lane” on EDSA – which is essentially the sidewalk.

Bea, Jennylyn, and the rest of commuter population are left to fend for themselves getting to work.

Jennylyn said that she’s been thinking of taking out a loan for an e-bike so she would no longer have to walk. She said there’s no guarantee that she will not get infected inside PUVs once public transportation resumes.

Bea doesn’t think PUVs would be any safer too, but she’s still conflicted on whether she will take the jeep again during GCQ.

Mobility groups have been asking the government to ensure, now more than ever, the safety of people who use non-motorized modes of transportation.

This discussion has taken a life of its own on social media, with the online universe pushing government to “Move People, Not Cars.”

So far, the ball is now in the court of local officials. Will Metro Manila mayors reach a consensus before the capital region shifts to GCQ? Garcia told Rappler, “Not sure.” – Rappler.com

*Name was changed upon request

TOP PHOTO: A resident of Mandaluyong City on May 16, 2020, uses his bicycle as access to public transport is not yet allowed during the MECQ period. Photo by Rob Reyes/Rappler