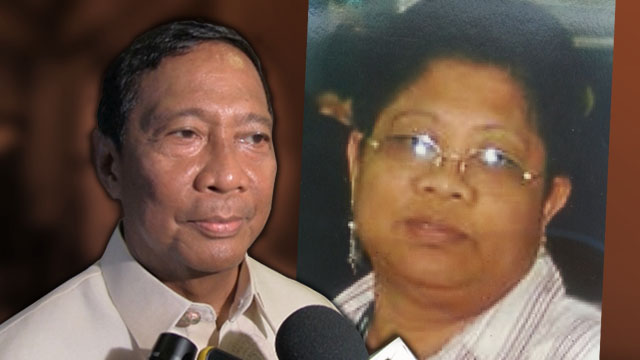 Like Luy who is related to the alleged pork barrel queen, Baloloy is a distant relative of the Binays. Baloloy lived with the Binays and has been the Vice President’s personal secretary since he was first appointed OIC-mayor in 1986.

And like the principal pork barrel whistle blower who knew more about Napoles’ finances more than her husband, Baloloy knows more about the private finances of Binay than his wife Elenita.

From a mere “alalay” or aide to Binay when he was still a struggling lawyer, Baloloy has risen from the ranks, not only in terms of position but also in social stature.

In 2010, Baloloy was honored by the Makati City government as one of its “Five Outstanding Mothers” for that year. A 2012 press release issued by the city government for a fashion show dubbed “Kasuotang Filipino 2012” described Baloloy as Special Assistance Office head under the Office of the Mayor. She was among the models for the Visayas-inspired Filipino costumes.

If there’s anyone more loyal to Binay outside of the immediate family, that would be Baloloy, said former vice mayor Ernesto Mercado. Her loyalty is such that “she will bring Binay’s secrets to her grave.”

Most of these secrets involve Binay’s alleged hidden wealth, some of which Binay’s wife Elenita may not be entirely aware of. “Walang hindi alam si Ebeng (Ebeng knows everything). She enjoys the full trust and confidence of the Vice President.”

Mercado first mentioned Baloloy’s name during a Senate hearing in September. She was among those to whom he delivered alleged kickbacks for Binay from contractors who secured projects in Makati. The other two alleged bagmen are Binay’s son and current Makati Mayor Jejomar Erwin “Junjun” Binay and Binay’s “dear friend,” Gerardo “Gerry” Limlingan.

The camp of the Vice President belied Mercado’s claims.

Summonses issued to Baloloy by the Senate Blue Ribbon sub-committee were not served as she could not be located. The National Bureau of Investigation is also searching for her whereabouts.

In his testimony Thursday, November  6, at the Senate, Mercado revealed that Binay had 7 foreign accounts in several banks in Hong Kong – 3 of them indicating “care of” Baloloy. These are:

These foreign accounts were not reflected in any of Binay’s SALNs for the covered period that the accounts were active. (READ: Mercado shows Binay’s ‘hidden’ dollar accounts)

In the mayor’s office, Binay maintained two secretaries – one who deals with his official functions and the other, who handles his personal affairs. Baloloy is the latter kind of secretary, Mercado said.

Unlike other executive secretaries who develop the habit of throwing their weight around, Baloloy is described as amiable, simple, low-key, and pleasant to deal with.

“She’s unassuming and just stays in the background,” said a former Makati councilor. “She is Ate Ebeng to everyone.”

Despite her closeness to the Binays, Mercado said Baloloy was “never abusive. Walang kayabang-yabang (She’s not arrogant).” She’s also religious. “She goes to (the Our Mother of Perpetual Help) Baclaran Church every Wednesday.”

When Mercado was still contemplating whether to finally spill the beans on his former patrons, he initially fought the urge to include Baloloy in the cast of characters he would drag in his explosive testimony. He knew Baloloy is just a loyal soldier who would do the bidding of her master.

“Ang tagal ko pinag-isipan (I considered it for a long time), but I had no choice. The story would not be complete without her,” Mercado said.

As Binay’s girl Friday, Baloloy not only arranged his personal schedule, but also kept tab of his finances, particularly those for the former mayor’s personal use.

“She has her own credit card issued by the Vice President to be used for expenses that are not known to Mrs Binay,” Mercado said.

Baloloy is also Binay’s first liner for documents that were received and dispatched by the Office of the Mayor. “She has a special secret seal that tells you that a document has been received or released by the mayor. That seal tells you whether a document is authentic or not.”

As bookkeeper of Binay’s finances, Baloloy was initially the de facto treasurer of the Binay family. In fact, it was from Baloloy that Mrs Binay received the family’s budget. “Kaya galit sa kanya si Mrs Binay (That’s why Mrs Binay is upset with her),” Mercado said.

The set-up changed when Mrs Binay became mayor herself, when she succeeded her husband in 1998.

The employer-employee relationship between Binay and Baloloy extends beyond City Hall. She was tapped as secretary in Agrifortuna Inc when it was formed by Binay, his wife, and his former law partners in 1992.

Agrifortuna was the alleged business front of the Binays’ piggery farm located in the controversial 350-hectare property in Rosario, Batangas. The company was later acquired by businessman Laureano Gregorio Jr and later sold to businessman Antonio Tiu.

Baloloy’s husband, Francisco, is also said to be a lot owner in the Batangas property.

Mercado showed during the Senate hearing US dollar purchases by both Baloloy and Limlingan which were credited to their Manila branch-ING bank account.

They also held joint stocks with Manila Water Company. A Google search showed that they owned 110,000 shares as of March 3, 2006.

In a way, Baloloy and Limlingan, working closely together, act as Binay’s check and balance team. “Baloloy receives the collections and Limlingan does the accounting,” Mercado said. – Rappler.com