Can we know how rich the Catholic Church is? 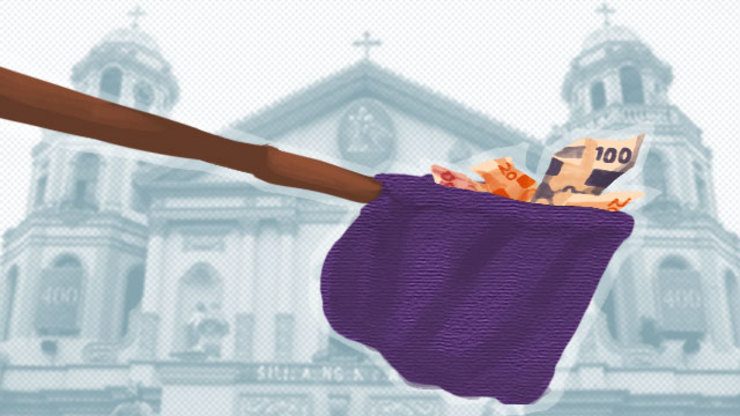 Facebook Twitter Copy URL
Copied
How much wealth does the Philippine Catholic Church own? It's a puzzle that not even the Church hierarchy has figured out with certainty.

MANILA, Philippines – On January 16, Pope Francis will say Mass before some 2,000 bishops, priests and select people at the newly renovated Manila Metropolitan Cathedral-Basilica. It will be the third time that a Pope will make an apostolic visit to the church property that has been the resting place of former archbishops of Manila.

The papal Mass is a fitting highlight to the freshly earthquake-retrofitted cathedral. In February 2012, then newly-appointed Manila Archbishop Luis Antonio Tagle ordered its closure and renovation after issues were raised about its structural integrity.

At the time, in a press conference announcing the closure of the structure in Intramuros, the charismatic church leader appealed for donations for the cathedral’s repair. Repair and construction cost was initially pegged at P40 million-P50 million.

By the time it reopened in April 2014 attended by who’s who in politics and Church circles, the running cost had reached P136 million, former Chief Justice Artemio Panganiban, who is also president of the Manila Cathedral Foundation, said in a news report.

Before the year ended, the total cost had ballooned to around P200 million to include additional improvements like central air-conditioning and installation of new carillon bells from The Netherlands, Panganiban said in a separate interview.

The reconstruction and renovation of the “Mother church” in the Philippines is arguably among the most expensive ventures of the Archdiocese of Manila to date.

There was no money for the extensive project, but raising the funds was no issue to the premier archdiocese in the Philippines.

There were also other private donors who gave huge sums of money, as well as the “simple people” who gave loose coins for the reconstruction of the cathedral.

The reconstruction and renovation of the Manila Cathedral, the ‘Mother church’ in the Philippines, is arguably among the most expensive ventures of the Archdiocese of Manila

Given its appeal for help, many would assume the Roman Catholic Archdiocese of Manila (RCAM) is cash-strapped. But in reality, it is overflowing with money, tucked in bonds, foreign currency deposits and stocks investments, maintaining its position as one of the richest Catholic dioceses in the entire world.

How much wealth does the Philippine Catholic Church actually own? It’s a question whose answer is as elusive as the Holy Grail. It’s a puzzle that not even the Church hierarchy could easily piece together.

Not all dioceses are created financially equal. In truth, most of the dioceses and parishes operate on a hand-to-mouth existence, surviving on the daily Sunday offerings, church fees, and donations from generous patrons.

Many of their wealth are in real estate, which are considered “sleeping assets,” according to a lay leader who advises the Church on financial matters. “These do not generate funds unless you rent or sell these.”

A retired archbishop said the rich dioceses are only few and they in turn help to financially support the struggling dioceses. The financially stable dioceses are located in urban areas, like those in Metro Manila and Cebu.

In a diocese, church assets and properties (temporal or ecclesiastical goods in Church parlance), are managed by the bishop or the archbishop. Legally, the assets and properties are under a corporation sole — “a special form of corporation designed to facilitate the exercise of the functions of ownership carried on by the clerics for and in behalf of the church which is regarded as the property owner.” Under this set-up, the bishop of the diocese is the chief executive officer.

The yearly submission of financial statements would have been a reliable gauge of how the dioceses are faring financially. But in the case of RCAM, it has been delinquent in submitting statements, with no records available for scrutiny.

The RCAM last submitted its FS in 1985, before the downfall of President Marcos. Under the Corporation Code, its SEC registration should have been revoked by now.

A rare exception in the lack of transparency on Church financial matters would be the archdiocese of Nueva Segovia de Vigan, which submitted its latest FS submission with the SEC.

The RCAM has been delinquent in submitting statements, with no records available for scrutiny

The financial declaration of the the Archdiocese of Nueva Segovia provides a peek into how rich or poor the dioceses are. From 2012 to 2013, total assets reported by the archdiocese rose by P2 million, from P41.3 million to P43.6  million. The bulk of the assets are in the form of “investments,” totalling P31 million.

In terms of revenue, the archdiocese’s apparent main source of income are rental, amounting to more than P10.8 million for 2013. However, operational expenses amounting to P10.3 million almost depleted its revenues.

Accountable only to the Pope

At the diocesan level, financial monetary transparency has not been a strong virtue of the tax-free Church. Except for a chosen few, no one outside the diocese knows its financial status. At least at the parish level, some parishes post their income and expenses for everyone to see.

The Church financial adviser said those in the Church higher-ups have a tendency to resist financial scrutiny, traced to a mindset that they are not accountable to anyone, except the Pope.

The retired archbishop said any attempt to raise any issue on how Church funds are being handled is quelled at the root. “It is like questioning the authority of the bishop.”

And in an institution rooted in obedience and subservience, few, if any, would dare raise questions.

The Parañaque diocese is a case in point. In 2012, several restive parish priests asked the diocese for explanations of how and where money is being diverted after funds for social programs were slashed.

Parañaque bishop Jesse Mercado however stood his ground and refused to open the diocese’s books. The Apostolic Nuncio, the Pope’s representative here, was even asked to intervene.

In truth, the bishop is assisted by financial experts and self-styled financial gurus, acting as the financial board, on how to handle Church funds. “They advise the bishop where to put the money, how much are going to be allocated for certain projects, how much to invest and where.”

In some instances, the bishop, lacking administrative skills, rely on these experts. And this is where opportunism rears its ugly head.

The Church financial adviser said there had been incidents where Church funds were abused and misused by the very financial experts they trusted. The victims are not only the dioceses, but even some religious congregations. “There were cases where millions of funds disappeared after these were entrusted to these so-called experts.”

The Monte de Piedad scam is one glaring example. The bank, which was previously owned by the Church, suffered liquidity problems and was forced to close after some P1.2 billion loans were not recovered. The perpetrators of the scandal, one of them a former bishop and a retired monsignor, were left unpunished.

The RCAM however was quick to learn its lesson. It averted a financial disaster by replacing its financial board and putting a new set of people in it.

It is now back on its feet, awash with cash. – with reports from Rey Santos Jr/Rappler.com

Conclusion: Billions of pesos in Church funds locked in stocks