Crisis before Mamasapano: A tale of 2 PNP chiefs 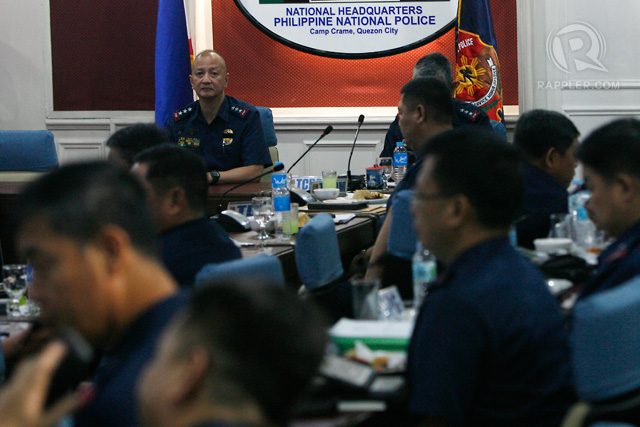 Facebook Twitter Copy URL
Copied
Even before Mamasapano, the PNP organization has been in a crisis, no thanks to the decision of the President to merely appoint an OIC to head it

MANILA, Philippines – The confusion over the chain of command in an ill-fated police operation in Mamasapano confirms the fears of many: having both a suspended police chief and an OIC in one organization doesn’t work.

The 150,000-strong Philippine National Police (PNP) is currently headed by its number 3, Deputy Director General Leonardo Espina, who is both officer-in-charge and Deputy Director for Operations.

Sidelined is PNP chief Director General Alan Purisima, who is serving out a preventive 6-month suspension order, issued on December 4, 2014, for a corruption case pending before the Ombudsman.

But the PNP chief’s lawyer said he did not know of any resignation by Purisima.

The Palace announced the President is set to make a public address at 6:30 pm, and is expected to clarify the issue on Purisima.

The reaction in Camp Crame was tepid. Some officials were excited but many were surprised or doubtful, hesitant to believe the news until after the President said it himself.

After all, Purisima himself has questioned his suspension at the Court of Appeals.  “Araw-araw, may kumakalat na ma-gra-grant yung TRO. Yung iba, takot balikan ni Purisima pagbalik niya, kung bumalik man siya,” the source told Rappler. (Every day there’s a rumor that his TRO will be granted. Others are worried that Purisima will get back at them, if ever he does come back.)

In December, as lawmakers, observers, and officers within the PNP tried to make sense of what having a suspended chief meant, Interior Secretary Manuel Roxas II gave assurances the set-up would not be a problem for the organization.

As long as I’m your OIC, let’s follow the line. Let’s toe the line.

The Interior chief said Espina would be given the “full powers and full authority” of a PNP chief as OIC. It worked out fine for a month or two. In January, Espina oversaw the successful event and route security during Pope Francis’ 5-day visit to the Philippines.

Barely a week after the papal visit, the “limits” of Espina’s powers became painfully clear: the PNP OIC was kept out of the loop in a high-level operation to neutralize top terrorists and bomb-makers Zulkifli bin Hir (alias “Marwan”) and Abdul Basit Usman.

With the death of 44 PNP Special Action Force (SAF) troopers during “Oplan Exodus” in Mamasapano town, one question hounds the PNP and the appointing powers in Malacañang: Why did a suspended PNP chief have a direct line to the chain of command that executed the plan to arrest top terrorists on January 25?

On Thursday, February 5, Espina gathered all chiefs of the PNP’s regional police offices and national support units. It was the first Command Conference of the year, the first since Purisima’s suspension, and the first with Espina as OIC. “We feel that even before this crisis, huminto ang mundo eh (The world stopped). There are a lot of things happening in this headquarters, in this organization… there are times when we are not informed. That is why we’re calling upon this meeting to tell you na meron pang (that there is still a) command group na kaming dalawa (that consists of the two of us),” Chief Directorial Staff Deputy Director General Marcelo Garbo Jr told a room full of mostly two- and one-star generals and full colonels of the PNP on Thursday.

Under the instructions of Purisima, then-PNP SAF commander Police Director Getulio Napeñas said he told Espina of “Oplan Exodus” only after troopers had entered rebel areas in Mamasapano town. It was around this time that the SAF’s 84th Seaborne Battalion, had successfully killed Marwan and cut off his finger for DNA testing.

Things went awry after. The 55th Special Action Battalion, tasked to serve as a blockade for the Seaborne men, realized rebel fighters had surrounded them at around daybreak. (READ: PNP SAF commander: Was it worth it?) The police general said that upon being told the SAF troopers were in trouble, he called his Philippine Military Academy classmate, Western Mindanao Command Lieutenant General Rustico Guerrero.

In the end, all but one of the Special Action troopers died on January 25. Nine from the Seaborne Battalion are among the 44 slain.

Various news reports, including at least two Rappler sources, claimed it was Purisima who “remote controlled” the operation, allegedly while in the controversial “White House” inside Camp Crame.

It’s a claim a source close to his camp denies, although Purisima has yet to speak publicly on the matter. The “White House” is the official residence of the PNP chief, and has been the subject of plunder raps against Purisima.

Citing police procedures, however, a source close to Purisima said the buck stopped with Napeñas, who has since been administratively relieved over the January 25 encounter.

Nine long months before the carnage, on April 23, 2014, Espina, Roxas, the President and then-Autonomous Region in Muslim Mindanao police commander Chief Supt Noel delos Reyes were briefed on the SAF’s plan to neutralize Marwan. But the briefing did not say when or where the SAF intended to make the arrest, given the shifting reports about their target’s movements.

On  February 4, Napeñas broke his silence in a hastily-organized press conference, where he insisted the military knew of the SAF troopers’ location and could have saved them.

Just before Napeñas’ press conference, Armed Forces of the Philippines chief of staff General Gregorio Catapang Jr said that although he and other high-ranking military generals were told about the SAF operation as early as December 2014, they expected tactical coordination from SAF before D-Day.

(That’s why I stepped in. They were starting to fight. One is accusing the other of not knowing, not being able to reinforce while the other is insisting he knew. That’s enough.)

(I’m always asked: Is it because I’m just OIC and the PNP chief isn’t dismissed that the chain of command was all confused? I told them that doesn’t seem to be the case. It’s an individual decision to not inform me. Not all of you are like that.)

“I am your OIC today. I was your OIC yesterday. Kung ano mangyayari ngayong araw, at meron kayong pagkakamali (what ever happens today, if something goes wrong), I’ll reckon with you. Kung ano nangyari kahapon, at meron tayong kinakailangang pag-usapan (If anything happened yesterday, and we need to talk about something), you’ll reckon with me. Kung bukas iba na, iba na (If tomorrow, someone else is here, that’s a different story),” an emotional but composed Espina told the PNP leadership.

Espina later admitted to reporters that it was time a new PNP chief is appointed.

The Mamasapano incident also highlights another long-brewing problem in the PNP: Purisima and Interior Chief Manuel Roxas, who has supervisory powers over the PNP, do not see eye to eye.

Even before January 25, it has always been an awkward situation at Camp Crame where the not-so-smooth relationship between Purisima and Roxas is an open secret. Both Roxas and Purisima are close to President Benigno Aquino III. Roxas is a longtime and trusted ally, while Purisima has been a close friend since the late 80s. (READ: Aquino, General Purisima and the past that binds them)

That Purisima had a direct line to the President is no secret to the PNP hierarchy. There are some senior police officials – those closely associated with Purisima – who seem to resist Espina’s powers as OIC.

Another police general told Rappler it’s an awkward time for everyone – those associated with Purisima, those who detest the PNP chief, and even those who are “neutral” parties.

It was a situation Espina addressed, although indirectly, during the February 5 Command Conference.

(Stop speculation and anticipating. You were all [plebes in the PMA] once. Those who anticipate and speculate too much end up shorthanded. So today if I’m OIC, follow that. Some of you pretend to be confused, anticipate too much and that’s why there’s chaos.)

Personnel movements are limited. Espina can only designate OICs, neither acting nor permanent officers in particular positions, based on a resolution released by the National Police Commission on the PNP OIC’s mandate.

Many positions in Camp Crame, for instance, are held by police officers in either acting or full-time roles.

Money matters are also fairly restricted for Espina, who is only authorized to sign or renew contracts for “regular” – meaning old – PNP transactions, although he is allowed to approve contracts for PNP procurements.

(It used to be that the goal of every officer was to be a general because that means you’re secured, there’s no need to worry. But now, even generals are thankful to be acting officers for a year. It’s better than being “floating”.) Espina, a former spokesman for the PNP, is careful in his words and savvy when it comes to dealing with media.

Away from the camera on Thursday, he also had clear words for the men and women who hold key offices in the PNP.

“Kung sasabihin kong wala tayong problema, mukhang hindi tama. Kung sasabihin kong sobra-sobrang may problema tayo, hindi rin tama. Meron tayong problema, aminin natin. Kung hindi natin aminin yan, we will never solve this problem,” he said. (If I say we don’t have a problem, that’s not right. If I say he was a really big problem, that’s not right either. We have a problem, let’s admit that. If we don’t admit it, we will never be able to solve it.)

With a suspended-but-not-resigned PNP chief still refusing to budge, and a president who apparently does not mind having an OIC head the national police force, Espina can only rally his men and women to move forward.