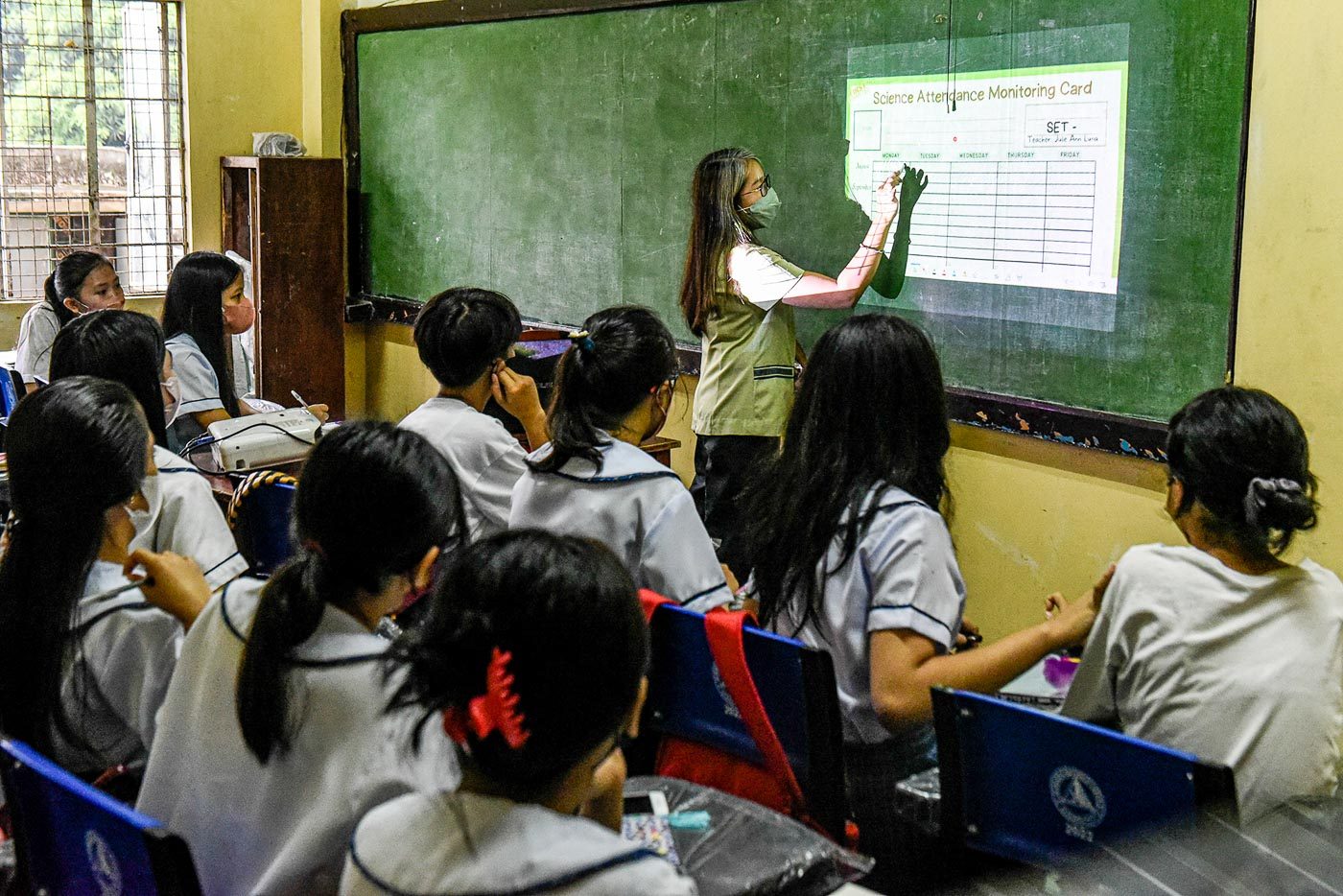 BACK IN CLASS. Students attend the first day of in-person classes at the Batasan National High School in Quezon City on August 22, 2022.

MANILA, Philippines – When Mark (not his real name) graduated from senior high school (SHS) in 2018, he had hoped he would be able to get a job so he could help his parents with their finances. After all, this was the promise of K to 12: to make senior high school graduates employable by the time they finish Grade 12.

But this didn’t happen, at least for Mark and for other hopefuls of the K to 12 program, as employers still preferred college graduates.

“Umasa ako sa K to 12 . Nasabi ko, ayun makakatipid ng dalawang taon kasi magkakatrabaho na,” Mark said in a phone interview with Rappler. (I was hopeful for K to 12. I told myself before that we would be able to save money for two years because I would be employed.)

Mark, the eldest of four, said that when K to 12 was launched in 2012, he was excited about the program since his parents could barely make ends meet due to unstable income. He was optimistic he could help them send his younger siblings to school. (READ: INFOGRAPHIC: 10 things about K to 12)

Even before K to 12 was launched in 2012, many were already clamoring against the additional two years of basic education. Despite a classroom shortage, lack of textbooks, tables and chairs, the ambitious program was implemented. Policymakers and proponents of K to 12 marketed it to the public as a curriculum preparing “graduates for tertiary education, middle-level skills development, employment, and entrepreneurship.”

Mark, who took the Accountancy, Business, and Management (ABM) strand, recounted that when they were doing their internship in a company during his SHS, their supervisor told them that when they finish college and get their diploma, they should consider applying with the company.

(I was like, what? I thought they could already hire us. Companies didn’t make adjustment to align with the direction of K to 12. Almost all companies still required a bachelor’s degree.)

Not priority to be employed?

In 2018, a study by the Philippine Business for Education (PBEd) found that the first batch of SHS graduates had “theoretically” 93% of competencies suitable to the needs of the nation’s industries, such as critical thinking and problem-solving skills.

But in a separate study by PBEd, only 20% of 70 of the country’s leading companies across all sectors were inclined to hire SHS graduates. The study also noted that employers accept only job applicants with at least two years of college education, excluding SHS graduates from consideration.

Meanwhile, a study done by the Philippine Institute for Development Studies (PIDS) in 2020 showed that most SHS graduates chose to continue their education at the tertiary level to get a bachelor’s degree. PIDS noted that a little over 20% of the SHS graduates enter the labor force and over 70% continue with their education. The report said that there was a need for government “to re-examine the employment and entrepreneurial objectives of the SHS program.”

This was the case for Mark. When he learned that employers didn’t favor SHS graduates, he opted to continue his college education for a better chance of getting employed.

(We wasted two years. For my part, I already graduated from college, and the market for talent is so competitive. We were delayed for two years while the other non-K to 12 graduates had already accumulated skills.)

In a TV interview on November 9, PBEd president Dr. Chito B. Salazar said that another barrier for SHS graduates in landing a job is the “diploma mentality” of Filipinos.

In a statement on November 14, Senator Alan Peter Cayetano said that the government should rethink its implementation of the K to 12 program.

“The immediate solution is simple: either i-suspend ang (suspend the) K to 12 for five to 10 years until we have enough resources, or fund the K to 12 now as it was envisioned,” Cayetano said.

The senator said the K to 12 program has, so far, failed to “address problems concerning the quality of education in country,” noting the stark difference between what was promised for K to 12 and what the reality is on the ground.

In his first State of the Nation Address, President Ferdinand Marcos Jr. said that a “careful review” was underway for the K to 12 program.

“There have also been lengthy discussions on the continuation and viability of the K-12 school system. We are giving this a careful review, and all necessary inputs and points of view are now being considered,” the President said.

Meanwhile, Vice President and Education Secretary Sara Duterte called on the business sector to consider employing K to 12 graduates in a bid to create more livelihood opportunities for Filipinos.

“This is a comment from the CHED [Commission on Higher Education] that there is a diploma mentality in our country. Do students need to be college graduates to get employed by industries?” Duterte asked.

“We hope to see the support of your sector in making sure that our grade 12 graduates are hired and employed by the industries that you participate in,” the Vice President said.

With the rising prices of commodities, two additional years of basic education for average Filipino families are already a burden. Mark and other poor Filipinos hope for swift action from government.

“They need to reassess because from what I remember, one of the goals of K to 12 is for students to be at par with other countries in terms of skills and employability, but nothing has happened,” Mark said. – Rappler.com