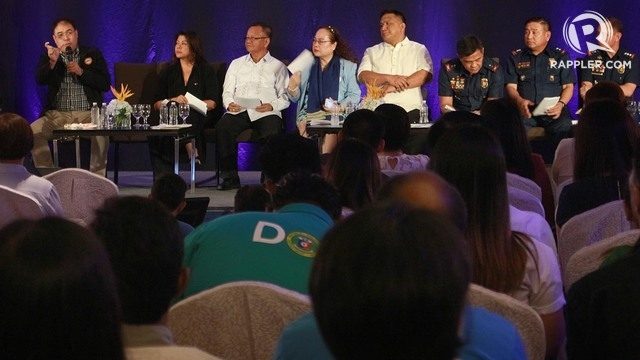 Facebook Twitter Copy URL
Copied
The administration has enacted policies that prevent independent records from keeping up with the pace of its anti-drug campaign.

The Duterte government has a history of underreporting killings in its brutal anti-drug campaign.

When President Rodrigo Duterte assumed office, drug-related killings spiked in the country. After installing his most trusted cops in key positions in the Philippine National Police (PNP), the number of killings was made worse by the police shooting of drug suspects, with cops dismissing them as “nanlaban“ or having fought back.

Trying to match the pace of the police, journalists attempted to cover as many killings as possible in the early months of his administration. Every morning, they showed Filipinos and the world the viciousness of the anti-drug campaign.

Without a tally by the government early on, human rights groups and news organizations kept their own independent counts. (READ: The Impunity Series)

The controversy proved to be too much for the administration when it launched #RealNumbersPH in May 2017, its counting project meant to release “official” numbers regularly so that, as it claimed, “everyone was in the same picture.”

But with the source of numbers limited to its own count, this picture that the administration wanted everyone to see was far too rosy, if not way too unreal.

The Duterte administration also enacted policies that prevent independent records from keeping up with the pace of its anti-drug campaign. And when spot reports were ordered released by the Supreme Court, officials from other government agencies submitted reports that were – according to lawyers who saw the data – “rubbish.”

Various policies and acts of the administration have caused underreporting and misrepresentation in the drug war, a bloody campaign funded by Filipino taxpayers’ money amounting to billions of pesos.

When the #RealNumbers initiative was launched in May 2017, independent news organizations and human rights groups already counted between 7,000 to 9,000 drug-related killings, lumping together deaths in police anti-drug operations and vigilante-style killings reported to be inspired by Duterte.

With the #RealNumbersPH count, the government claimed only around 2,679 deaths that occurred in police operations as of January 2017. It didn’t have the latest figures when it was launched.

With #RealNumbers, the administration had two goals: to announce the achievements of the campaign in terms of law enforcement and for government to broadcast a single number of killings.

For the killings, the #RealNumbers data only count deaths in police anti-drug operations. The government does not track vigilante-style killings, which, according to human rights groups, form a bulk of drug-related deaths under the Duterte administration.

Data obtained by Rappler showed that 7,884 drug suspects have been killed by the police from the time Duterte assumed office up to August 31, 2020. The number excludes around 27,000 vigilante killings outside police operations estimated by human rights groups.

What is the government’s count for vigilante killings outside police operations? The short answer: The government does not track them.

Instead, the government counts all killings that occur in the country then sorts them into either drug-related or non-drug related killings.

By drug-related, the government means that either the killer or the victim has confirmed or suspected links to illegal drugs, or the motive for the killing is suspected or confirmed to be drug-related. This is a broad definition that discounts whether the manner of killing was vigilante-style or had anything to do with the government’s ongoing anti-drug campaign.

On August 18, 2016, during a Senate hearing on possible revisions to laws that would help anti-illegal drug efforts, then-police chief Ronald dela Rosa used the term “deaths under investigation” (DUI) for the first time.

The PNP clarified only almost a month later on September 15, 2016, that not all of the DUIs are drug-related. They also included non-drug-related killings like homicides springing from other circumstances, like holding personal grudges or even business disputes.

This clarification came only after the media, including Rappler, took DUI to mean killings related to the anti-drug campaign.

In March 2017, the PNP internally rebranded DUIs to HCUI – homicide cases under investigation. The definition has not changed.

A big chunk, or 43.17% of the killings, have not been classified because, according to the PNP, they required further investigation.

The Duterte government has also actively blocked, if not made it difficult, for independent groups to mount investigations on killings in the anti-drug campaign.

In his July 2017 State of the Nation Address, Duterte told law enforcers to refuse to be investigated.

It was unclear at the time what this order meant for investigators on the ground.

On September 8, 2017 then-Department of the Interior and Local Government officer-in-charge Catalino Cuy disclosed to reporters that Duterte had ordered the PNP not to share any of their investigation folders with the Commission on Human Rights.

This meant that killings, especially suspicious ones, could not be investigated properly by the CHR, and could not be exposed to the public unless the President allowed them.

The case folders contain police spot, investigation, forensic, and inventory reports of all killings related to the war on drugs, both in and out of police operations. These are essential documents that guide investigators in getting to the bottom of the cases.

In July 2020, Rappler requested data on killings under the anti-drug campaign. Then-police spokesman Brigadier General Bernard Banac explained that they no longer release their own numbers. He pointed to the #RealNumbers project managed by the Presidential Communications Operations Office (PCOO) which is directly under Duterte.

What the OSG and PNP virtually want is for the Supreme Court and the petitioners to utterly waste valuable time and resources examining case files which are totally irrelevant and, in fact, absolutely rubbish insofar as the instant cases are concerned.

CenterLaw, one of the Supreme Court petitioners against the Duterte anti-drug campaign

A window for scrutiny was opened by the Supreme Court in April 2018 by compelling the government to share documents on around 3,000 deaths in police anti-drug operations.

The Supreme Court also ordered concerned government agencies to share them with petitioners who were questioning the constitutionality of the anti-drug campaign.

When the petitioners received the documents, however, they found that they only received “rubbish” – documents that did not include the killings in police operations that they were questioning.

On August 19, The Atlantic came out with a report detailing how Metro Manila policemen were failing to count as much as twice the actual number of drug-related killings happening.

They found that hundreds of homicides were not recorded by the police.

They also found that police regularly miscategorized drug-related killings as non-drug related or left them to be “under investigation,” despite obviously having drug-related elements in the circumstances of the crime.

As for killings under police operations, the government has also been underreporting its figures.

The numbers from the #RealNumbersPH tally are the only publicly available data released by the government which media and the public can use.

The PNP has not been releasing its own count, deferring to the incomplete and unupdated count of the #RealNumbersPH project instead.

However, Rappler obtained data from the PNP’s Directorate for Operations saying that as of August 31, 2020, some 7,884 drug suspects have been killed in police operations – around 2,000 deaths more than the latest figures reported by the #RealNumbers count.

Taken altogether, the blunders on data-keeping on the ground and from the highest offices of the government and the police leave analysts, the media, and the public, without a reliable source of information on the anti-drug campaign’s progress.

Together, these oversights produce a system that allows deaths to go without proper investigation. – Rappler.com