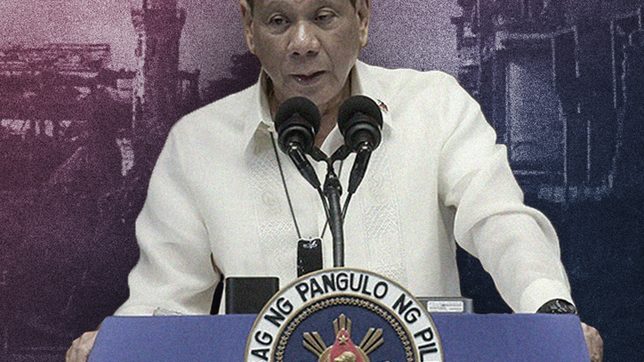 President Rodrigo Duterte, the country’s first Chief Executive from Mindanao, failed to mention the rehabilitation of Marawi City and the fledgling Bangsamoro Autonomous Region in Muslim Mindanao (BARMM) in his 5th State of the Nation Address (SONA).

In his nearly two-hour speech on Monday, July 27, all Duterte said about his home region was to claim there were no human rights abuses in the two-and-a-half years his martial law declaration had been in effect in Mindanao. The claim is disputed by human rights group Karapatan, civil society groups in Marawi City, and progressive lawmakers.

Duterte could not spare a few words for Marawi City, the lakeside city in Lanao del Sur that endured a 5-month siege by Muslim extremists in 2017 and which, after 3 years, still remains in ruins. It was the Marawi siege that led Duterte to declare martial law in the first place.

The President’s silence on Marawi was deafening for Mindanaoan government officials.

“It would’ve made a lot of difference for us had Marawi rehabilitation been mentioned because that would then set the tone that the rehabilitation process is a state priority and not merely an administrative program,” Marawi City native and Bangsamoro Transition Authority member Zia Alonto Adiong told Rappler on Tuesday.

The concern was echoed by Basilan Representative Mujiv Hataman, a former governor of the Autonomous Region in Muslim Mindanao.

“Was expecting that he would give a time frame for the Marawi rehabilitation effort the way he gave a warning against Globe amd Smart because 3 years have already passed,” Hataman told Rappler.

Hataman feared that if the reconstruction of the city is not finished by the time Duterte steps down in 2022, Marawi will be truly forgotten.

The two officials were waiting to hear Duterte tell Congress to ensure a budget allocation for Marawi City in the 2021 national budget.

A group of Marawi residents organized their own State of Marawi Bakwit (SOMBAK) 2020 after Duterte’s SONA and said they gave his speech a failing grade of “zero.”

“This is the true state of the bakwit (internally-displaced persons) – our lives have turned for the worst especially now in the time of the pandemic. Our hardships have doubled and we are barely surviving,” said Drieza Lininding of the Moro Consensus Group.

Anak Mindanao Partylist Representative Amihilda Sangcopan said that when Duterte began talking of his Build, Build, Build infrastructure push, she had hoped to hear about infrastructure for Marawi City, especially its commercial hub that was leveled during the siege.

“But there was nothing,” she said in a statement.

The Duterte administration had previously said the reconstruction of Marawi City’s most devastated central portion would be completed in December 2021.

For Nikki dela Rosa of conflict monitoring group International Alert Philippines, the absence of Marawi rehabilitation from the SONA means “either Duterte does not see it as a priority or he assumes that it is on track and will be delivered” by Task Force Bangon Marawi chief Eduardo del Rosario.

She also said Duterte was “mistaken” when he said there were no human rights abuses during martial law in Mindanao.

Reports received by International Alert from locals indicate abuses, apart from reports made to police and media.

“We have reports from the Critical Events Monitoring System, for example, of excessive use of force such as such as intimidation and harassment in checkpoints, illegal arrests on suspicion of involvement in extremist violence, and warrantless searches conducted,” Dela Rosa told Rappler.

Another government promise that the Mindanaoan President left out in his speech was compensation for Marawi residents who lost their homes during the siege and the battle between terrorists and government forces.

“I hope that before talking about death penalty, prioritize the compensation bill for Marawi because this will be a big help to families whose homes and property were damaged,” said Hataman.

The return of the death penalty by lethal injection for drug convicts was among the 21 bills Duterte asked Congress to prioritize for the remaining two years of his term.

“The President elucidated plans for national recovery and resilience that he wants to pursue for all Filipinos. But what about the Maranao who have been waiting for 3 fruitless years – way before the pandemic and its consequent economic crisis?” said the group in a statement.

They gave a dire warning that dissatisfaction over his government’s program for rehabilitating Marawi could fuel conflict.

Zeroing in on Duterte’s SONA remarks about the Balik Probinsya program for decongesting Metro Manila and spurring development in other regions, they asked, “How about a Balik Marawi program to deter deaths and disease in the refugee camps and to stem the rise of violent extremists that have tapped into local discontent?”

Around 17,000 Marawi residents now live in transitional shelters, an improvement from evacuation centers they occupied right after the siege, but still not home. These temporary shelters built by the government are also crowded and, in some cases, lack a regular and plentiful supply of water.

For Sangcopan, it’s a ticking time bomb should COVID-19 find its way in shelters, if it hasn’t already.

“Quarantine rules demand that you stay home to address the COVID-19 pandemic, but for the people of Marawi, they still do not have homes to return to… Marawi is still on its knees. It should now be prioritized especially during this pandemic,” said Sangcopan.

As of July 26, there were 178 coronavirus cases in Marawi City and Lanao del Sur. Of these 39, are active cases.

No mention of BARMM

This is also the first SONA where Duterte did not mention the BARMM, a new region whose creation he shepherded. In the 2019 SONA, held a few months after the region was formed, Duterte called on its officials to fast-track development and improve the quality of life of Muslim Mindanaoans and indigenous peoples.

For some reason, there was no follow-up in this year’s SONA when the Bangsamoro government had been in power for more than a year.

The glaring non-mentions spur questions on whether or not Mindanao remains a priority for a President who promised to champion its issues from a government based in Metro Manila.

Yet Mindanao has consistently boosted Duterte’s approval and satisfaction ratings in nationwide surveys. – With a report from Bobby Lagsa/Rappler.com