Behind the SC decision on Enrile’s bail 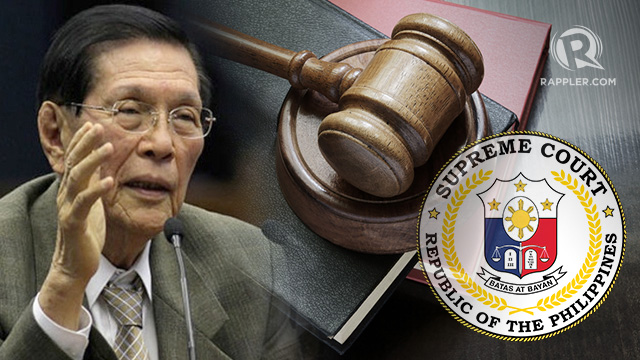 When the Supreme Court justices deliberated on Juan Ponce Enrile’s petition for bail, we learned that Lucas Bersamin, the ponente or justice in charge, argued that the 91-year-old senator should be granted bail on humanitarian grounds.

Those who opposed it said that the Court would be introducing a “new doctrine” in criminal law. After all, the procedure in filing a criminal case was dutifully followed by the Office of the Ombudsman and the Sandiganbayan. No shortcuts were taken.

The Ombudsman conducted a preliminary investigation after which it filed an “information” with the Sandiganbayan charging Enrile with plunder. For its part, the Sandiganbayan, like what other courts do, ordered the arrest and detention of Enrile without bail since he was charged with a capital offense.

Ordinarily, what happens next is that bail hearings take place and the prosecution is required to present evidence to prove the guilt of the accused. If the evidence is judged to be compelling, then the accused remains in detention without bail throughout the trial.

However, if the court finds the evidence to be flimsy, then the accused is released on bail. The trial still proceeds to determine guilt or innocence.

But Enrile went straight to the Supreme Court and asked for his freedom. His counsel, Estelito Mendoza, questioned this long-standing procedure which, he said, violates the constitutional presumption of innocence. (READ: Timeline: Enrile and the pork barrel scam)

Apart from this, Mendoza presented two mitigating factors – Enrile’s old age and his voluntary surrender – for his release.

Thus, Enrile’s bail comes even before the trial on the merits of the plunder case. The Supreme Court apparently considered the condition of the aging senator and granted him his freedom even before the start of the actual trial. Normally, mitigating factors are not considered for bail petitions. (Editor’s Note: This was written before the release of the SC decision on August 20. As it turns out, the majority decision was based mainly on humanitarian grounds. READ: SC’s grant of Enrile bail ‘political accommodation’?)

The vote was 8-4. Bersamin, an acknowledged authority on criminal law, was joined by 7 other justices. We, however, overheard that Associate Justice Martin Villarama Jr, who is on leave, verbally communicated his preference. We don’t know for sure whether he changed his mind and if his vote would still alter the 8-4 results.

No less than the ponente himself was reported to have changed his mind several times. Bersamin is a criminal law expert and is well aware of the impact of their decision on other officials who are currently still in detention. He was also the ponente of the SC decision on midnight appointments by former president Gloria Macapagal Arroyo, as well as the decision on the controversial Disbursement Acceleration Program.

Former Chief Justice Artemio Panganiban had described Enrile’s bid for bail as “novel,” citing the long-recognized procedure followed by Philippine courts. In the past, courts had only allowed hospital arrest because of health reasons, as was the case with Arroyo.

Panganiban wrote last year: “If the Supreme Court…frees him [Enrile] on bail, then for the same reason, all those currently accused of capital offenses, like former President Arroyo and the Ampatuan family as well as Senators Revilla and Estrada, should also be freed and granted bail while awaiting the ruling of the trial courts on whether the evidence of guilt in their respective cases is strong.”

For sure, after this latest decision, Arroyo would have a strong basis to seek similar humanitarian considerations. – Marites Dañguilan Vitug and Chay F. Hofileña/Rappler.com