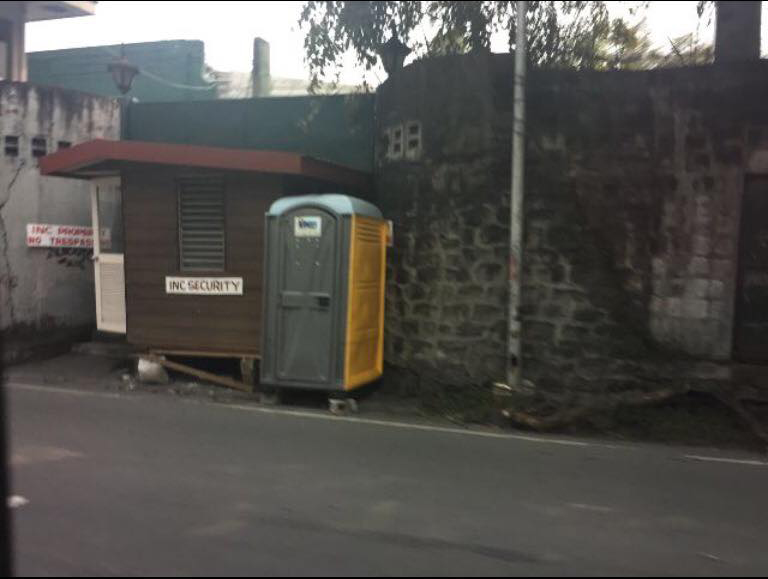 First there were additional security guards, CCTV cameras, and a portable toilet blocking the main gate.

Now, even electricity has been cut off in 36 Tandang Sora, where Angel and Lottie Manalo, the estranged siblings of Iglesia ni Cristo (INC) executive minister Eduardo Manalo, have been holed up months since they were expelled from the influential church.

The Manalo siblings have claimed harassment by top church officials since Angel and their mother Tenny appeared in a YouTube video last July to ask for help, claiming that their lives were in danger.

The power cut, they said, is the latest in a series of moves that aim to force the siblings out of the Quezon City compound.

Rappler obtained a photo of the notice of disconnection from Manila Electric Company (Meralco) addressed to the Iglesia ni Cristo, with address at 0001 New Tagumpay, New Era, Quezon City.

But it wasn’t until December 1 when the power in 36 Tandang Sora was completely cut off. A check with Meralco, however, revealed that it was not the power company that cut off power. No disconnection of the main meter has been made, Rappler was told. 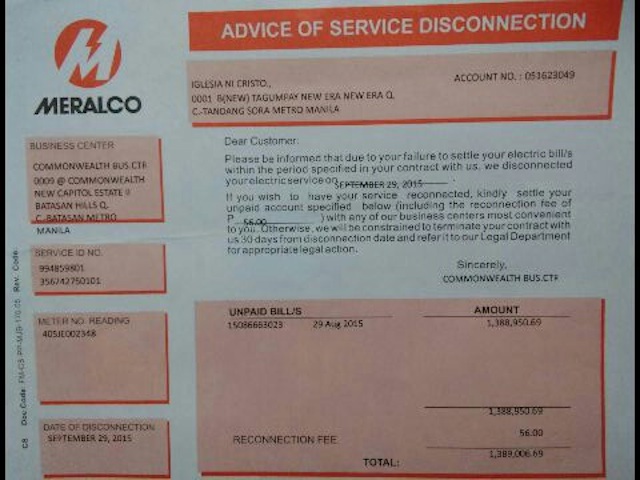 According to insiders, the bill ballooned to P1.38 million because it had not been paid since September, and because the bill likely covered other areas inside the church’s central compound.

Expelled INC minister Isaias Samson Jr said the Manalo residence’s electricity line is connected to the central office, but there is also a submeter located near a large generator that could supply electricity to 36 Tandang Sora.

It was installed during the time of the late executive minister Eraño Manalo.

Samson, however, claimed that the INC central office surrounded it with a fence to prevent residents from using it.

“They once in a while cut off the submeter line. [On December 1], the line was completely cut off,” he said.

According to an insider, a guard from the INC Central Office simply handed the bill to the house helper, and told the Manalos to pay the amount due.

But the residents of the compound are questioning this, since the bill was specifically made out in the name of the Iglesia ni Cristo – not to 36 Tandang Sora.

They also pointed out that it is only their residence that had the electricity line cut off. The guardhouse stationed in front of the main gate, they said, still has power.

The question now is: who should pay the bill? The issue is further complicated because of competing claims over the Tandang Sora property.

The INC is asserting that the property is theirs, presenting 9 different land titles and the testimony of a surveyor to prove ownership during proceedings on the INC’s petition for injunction filed before a Quezon City court.

Earlier, INC lawyer Serafin Cuevas Jr said that the Manalo siblings were allowed to stay at the compound as a “privilege,” because they are family members of Eraño Manalo.

In the past, the siblings also never had to pay the electric bills because of the same privilege.

Lottie Manalo-Hemedez, however, is questioning ownership claims to 36 Tandang Sora. Her camp claims that she and her late husband, Edward Hemedez, own the land title to the property.

They are also contesting a supposed deed of sale drawn up in April this year that transferred the property to the INC.

The document bore the signatures of the Hemedez couple, but Samson said this could not have been signed by Lottie’s husband because he died two years earlier.

Hemedez was supposed to testify before the Quezon City Regional Trial Court Branch 222 last November 23, but her testimony was rescheduled after the INC camp moved to defer proceedings.

Meanwhile, her camp continues to decry harassment from the church, saying that a portable toilet continues to block the main entrance of the gate. Guards were also seen monitoring motorists passing through the area and taking photos. – Katerina Francisco and Chay Hofileña/Rappler.com