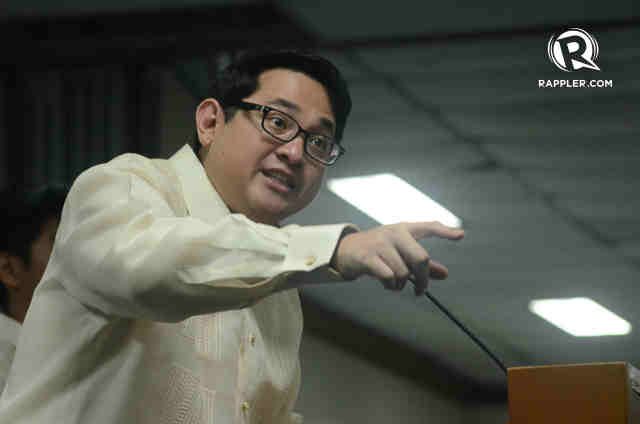 Facebook Twitter Copy URL
Copied
(UPDATED) The Cubao headquarters of the Mar Roxas campaign is not so happy with the President's cousin, we're told

The Cubao fortress of the Araneta-Roxas clan, which has been converted into campaign headquarters for the 2016 presidential run of its most famous heir, Mar Roxas, is now practically a free-for-all, come-as-you-are area for everyone – politicians, campaigners, supporters, converts, fan clubs, friends, relatives, media.

Except for one: Senator Bam Aquino, presidential cousin, member of the Liberal Party, campaign manager of Roxas’ running mate Leni Robredo, and – this needs emphasis – a member of the Senate Electoral Tribunal (SET) that voted in favor of presidential wannabe Senator Grace Poe in her disqualification case.

In a 3-page opinion that he released shortly after the tight SET vote (5-4 in favor of Poe), Aquino said “logic dictates” foundlings are neither naturalized nor stateless, but natural-born Filipinos.

“Foundlings are among the most vulnerable to statelessness and discrimination. Social justice dictates the State should be the first to recognize and ensure that foundlings are able to enjoy each and every right accorded them,” he explained. (READ: Senators explain votes on Poe case)

Rappler learned that Aquino’s pro-Poe vote infuriated the Roxas camp, which raised hell in closed-door meetings. It reinforced their suspicion, they said, that Bam was among those who had tried to influence the President to endorse Poe rather than Roxas for the 2016 race.

So for now he’s not welcome in “Balay” or “Bahay na Puti,” the Roxas home and campaign headquarters, according to our sources. “He’s banned in Balay,” says a source from the private sector who’s supporting the Roxas-Robredo campaign.

Are we headed for another Noy-Bi nightmare in May? Okay, let’s not go there – yet.

Perhaps Leni Robredo can try to lift that ban in the spirit of welcoming the New Year?

(While I admit that some members of the LP were surprised by my SET vote, I’d like to emphasize that they respected my decision and no one in the party tried to influence me in the case.)

(I am now busy making sure that Mar Roxas, Leni Robredo, and the entire LP Senate slate will win in the 2016 elections.)

(Reports like these are attempts to shift our attention. We’re all out in making sure that Mar, Leni, and the LP Senate slate will win.)