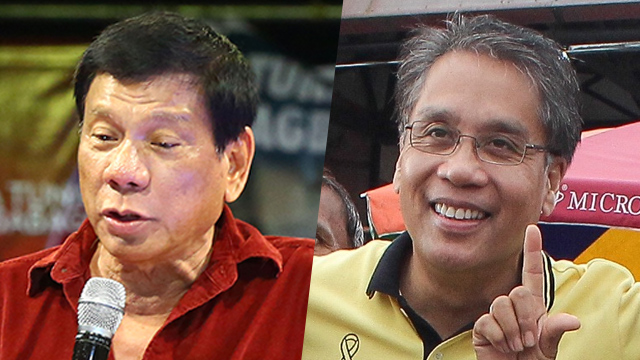 The presidential campaign is degenerating into literally below-the-belt challenges, and the Duterte camp is on the offensive.

On Friday, February 12, after his spinmeisters tried to downplay reports about a supposed mild stroke, Rody Duterte confirmed he suffered from a severe migraine attack and a chest cold.

Apparently an attempt at damage control after his men were caught lying about their candidate’s overnight stay at the Cardinal Santos hospital in San Juan, the presidential bet boldly faced reporters for an interview before his flight to Davao in the afternoon. He defended his spin doctors who said he was in Davao when in fact, he was in a hospital. The Davao City mayor said he asked them to lie so the media wouldn’t bug him in the hospital.

Asked during that same interview if he would be willing to disclose his medical records in response to a challenge posed by his close contender for the presidency, Mar Roxas, he replied he would. But on one condition.

“I won’t reveal my medical records. Ano ako, tanga (Am I stupid)?” the tough-talking candidate said, going on the warpath.

He could barely contain his laughter. It’s a departure from the combative Roxas the media and the public saw in December last year.

This is not the first time the two candidates – friends before Duterte decided to seek the presidency himself – engaged in a verbal tussle. The unpresidential exchanges even deteriorated into a slapping challenge.

Duterte’s spokesman Pete Laviña said in a press statement released Saturday, “Duterte has always looked at Mar Roxas as someone unfit to lead the country – someone who is not cut out for the position.” He was evidently referring to the poor response of the former interior secretary to the destruction and damage left behind by Super Typhoon Yolanda (Haiyan).

“That was what the mayor meant when he dared Roxas to prove that he is cut,” Laviña said.

But was that just a sly tactic meant to divert attention from Duterte’s health condition? If not, how much lower are the candidates willing to go just to score points with the voters? – with a report from Bea Cupin/Rappler.com