(UPDATED) Who is Professor Jose David Lapuz, the man whose name has been floated to take over the Commission on Higher Education (CHED) under the administration of President-elect Rodrigo Duterte? Many of his former students have little love for him, it seems.

Ateneo de Davao University president Joel Tabora SJ wrote in his blog on Monday, June 13, that the Davao City mayor had designated Lapuz to head the body which covers public and private higher institutions in the Philippines.

That information, however, elicited reactions from individuals – especially from Lapuz’s former students.

A Facebook post by music and film producer Chris Cahilig called out the reported plan of the Davao City mayor. He said Filipino students “deserve better.”

His post, which has gone viral, detailed his experiences as a student under Lapuz at the University of Santo Tomas (UST). For example, Cahilig narrated, class discussions throughout the semester were mostly about Lapuz instead of national hero Jose Rizal – the subject of the course itself.

Other former UST students commented on Cahilig’s post, sharing their own experiences in Lapuz’ classes. Other former students relayed via text messages their own horror stories, some saying they were asked to read in class about his achievements. They also said they did not learn anything from him and just wasted tuition.

Showing signs of narcissism, the former Rizal and political science professor would also require them to collect newspaper clippings of his published press releases and columns, Cahilig added. 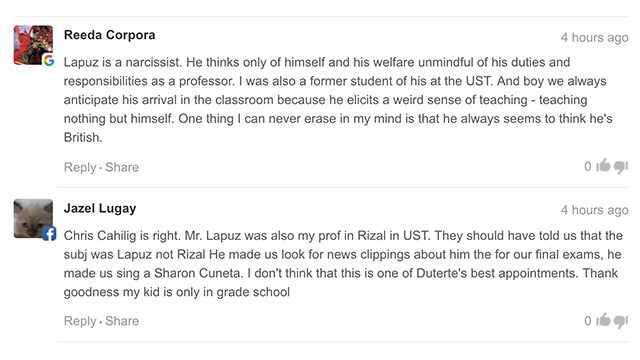 The experiences of these former students, narrated through social media posts and comments, seem to be unlike what Duterte had experienced.

Lapuz was Duterte’s political science professor at the Lyceum of the Philippines University (LPU) in the 1960s. The president-elect graduated from the university in 1968 before entering law school.

The Davao City mayor’s admiration of Lapuz was apparent when he gave the floor to his former professor during his miting de avance on May 7 at the Quirino Grandstand.

“Karangalan ko, sa tagal-tagal na pagtuturo ko, isang estudyante ko ay magiging president (It is an honor that in the long time that I’ve been teaching, a student will become president),” he said. “Pray Duterte will make it right.”

Meanwhile, in an open letter to the president-elect whom he described as the “embodiment and the very personification” of patriotic-nationalism, Lapuz expressed his gratefulness for the designation, which, according to him, is a realization of his dream since becoming a teacher in 1963.

He added that he would propose for the “vision of CHED” the “concepts of enlightened and illuminated nationalism in education.”

Unlike other Cabinet appointees, Lapuz will be unable to take the CHED chairmanship at the same time Duterte assumes the presidency.

The term of incumbent chairperson Patricia Licuanan will not expire until 2018 as mandated by law. Republic Act No. 7722 states that a chairperson shall hold office for 4 years per term.

On June 6, Licuanan said that she expects to stay as CHED chairperson but acknowledges the unpredictability of the president-elect.

“I expect to [stay], but he’s unpredictable at the moment. But I do have a term. So my term is over in 2018. Even if he appoints [someone], I will inform him nicely [that I have a term], and then sana nga (I hope) if he needs me, he will see that he’ll be lucky to have me as [chair of CHED],” she told reporters.

Given these restrictions, can Lapuz wait or will Duterte have his way? – Jodesz Gavilan/Rappler.com

Were you a former student of Lapuz? Do you have your own stories, both positive and negative, to share? Email investigative@rappler.com or move.ph@rappler.com.