Now it can be told: What President Aquino loves about China One thing many people may not know about outgoing President Benigno Aquino III is that he’s a foodie.

His expertise on – and fondness for – food was apparent at a thanksgiving lunch he hosted for members of the Malacañang Press Corps at his favorite Chinese restaurant on Friday, June 17.

As soon as he sat down, he acquainted reporters in his table with the President Grand Palace restaurant in Binondo, Manila, his top pick for Chinese food since his college days. He pointed out that the restaurant, a later incarnation of the original, is housed in a former Chinese theater.

Asked how he discovered it, Aquino said some of his college friends, who included some Filipino-Chinese, would frequent Chinatown to watch the latest Jacky Chan movies not yet screening in regular cinemas – even if they had no English subtitles. Their Chinoy friends would annotate the storyline, real-time.

Eating seemed to be central to his college barkada meet-ups. Aquino said the first question they asked each other was, “Saan tayo kakain (Where will we eat?)”

They would usually cap the day with a midnight snack at the then popular Kowloon House for siopao and dimsum.

Then there was Laloma, famous for its row of roast pig joints. He said there was a time his friends were in a boasting mood and ordered a kilo of lechon – each – plus rice on the side. And this was for dine-in, not for take out.

The President, an excellent storyteller, had many anecdotes about his dining experiences – and the lack of them when he became Chief Executive – throughout the luncheon.

Holding up his chopsticks, the President recounted how the Aquino family used to go to a Chinese panciteria after hearing Sunday Mass, followed by a movie. His father’s rule? “Ang hindi marunong gumamit ng chopsticks, ‘di puwedeng kumain (You can’t eat if you don’t know how to use chopsticks),” he recalled the late Senator Ninoy Aquino telling them.

They were even forbidden from using the porcelain soup spoon to scoop their food, shortening their learning curve.

When he became president, eating on time became a privilege. Lunch at 3 pm was the norm, and there were many single-meal days. It was worst during the campaign, when Jollibee Yumburgers became his constant companion. Eating good meals at the proper time were small victories in his battle with hyperacidity.

Specialties of the house As the reporters waited for the lauriat to be served, Aquino mentioned two of the restaurants’ specialities: sizzling oysters and the lightly-battered fried squid.

He described the squid as having a light crunch on the outside but succulent and tender when you bite into it. That was exactly what his guests experienced. The sizzling oysters, served on a hot plate, also lived up to the hype and pleased even those who didn’t like eating mollusks. 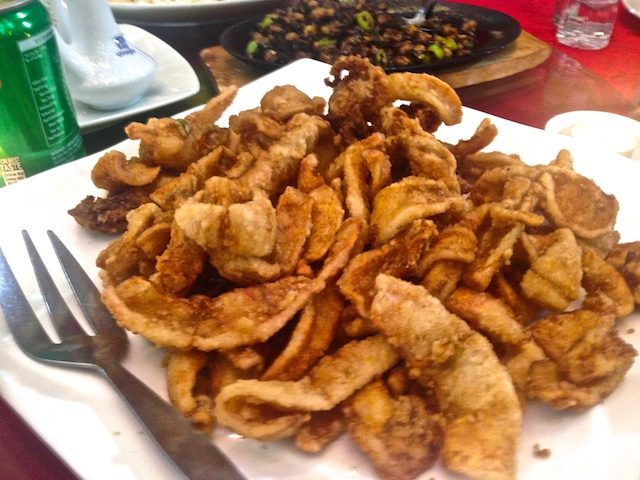 “Normally ‘pag masarap ang pagkain, ayaw mo ng fried rice; just plain rice,” the President volunteered. This is because the taste of the food would tend to compete with that of the seasoned fried rice which has other ingredients.

The dishes served were apparently those that the President liked. There were also sauteed shrimps with pepper and chili, sweet and sour pork, abalone with Chinese mushrooms, and steamed crabs with scallions. There were no poultry dishes; the President doesn’t eat chicken or any other fowl dish. (READ: 7 delicious Binondo discoveries) Aquino is familiar with Chinatown as he worked briefly at the Philippine Business for Social Progress that had an office in Dasmariñas Street, in the early 1980s. He said he also used to frequent nearby Raon to source corporate giveaways for Nike when he worked in its promotions team. – Mia Gonzalez/Rappler.com