Why Duterte is coy about choosing between Clinton and Trump

Oct 26, 2016 12:54 PM PHT
Pia Ranada
Facebook Twitter Copy URL
Copied
Before he assumed the presidency, Rodrigo Duterte was more candid about his thoughts on the US presidential candidates 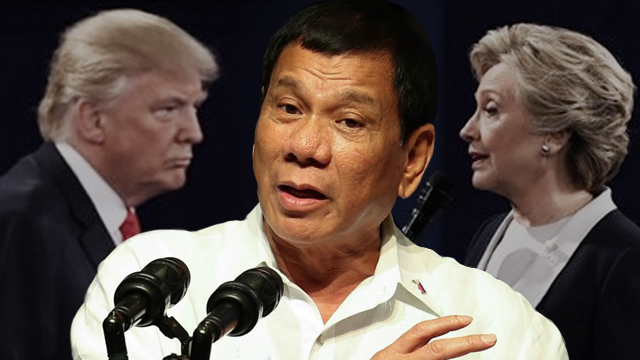 In the past few days, at least two foreign journalists have asked Philippine President Rodrigo Duterte who he prefers to win the US elections.

In both cases, the usually candid, censor-allergic Duterte gave a coy response.

“The US presidential elections just a few weeks away, what are your thoughts on the candidates and do you have a preference for which candidate should win?” asked a male reporter, reportedly from CNN, during a press conference Duterte gave last October 20 in Beijing, China.

The case would have been closed except Duterte gave a postscript.

“Of course, if you whisper to me, to which side I belong, I’ll tell you and you’d be surprised,” he said with a small smile.

The reporter could not help but press further, “Are you sure you don’t want to tell us now?”

Duterte demurred: “Because it’s not good, it’s not allowed, and I am sure that I’d get a lot of flak for that.”

When he landed in Davao International Airport on October 22, another foreign correspondent took a different tact in asking the same question.

“I was just wondering,” began CNN Tokyo correspondent Will Ripley, “Who would you get along with the best in the White House, Hillary Clinton or Donald Trump?”

Still, Duterte did not bite.

“You know my friend, I would like to answer your question candidly, honestly and truthfully. Problem is, of course personally, it would not really matter much. But I am a President of a country and we have these splendid relations with America and the fact that there are already millions of Filipinos, maybe, in your country…I cannot gamble an answer. Because either way, it would affect, you know, they might create a hostility here, antagonism here,” he said.

Instead of giving a direct answer, he repeated his preference for Russian President Vladimir Putin.

“I am better off in saying that my favorite hero is Putin,” he said.

Trump of the East?

Foreign journalists should have asked their question before he took his seat in Malacañang.

Before assuming the presidency, Duterte was quite candid about his opinion of US presidential candidates.

During a May 24 press conference in Davao City while he was still president-elect, Duterte was asked the question by a local reporter.

He responded by calling Trump a “bigot.”

“Hindi naman ako bigot (I’m not a bigot). He (Trump) hates Muslims,” he said then.

Something in this vein could be found in his teasing response to Ripley last October 22 when the reporter asked what he thought of people likening him to Trump.

Duterte responded by saying Trump was raising “valid issues,” for example, his concern about terrorism. But he also emphasized the importance of “acceptance” of other cultures.

“Everybody should be worried about terrorism. And of course, in this modern world, multi-cultural countries. There should be some, some semblance of, you know, acceptance and maybe, especially in the matter of religion, tolerance,” he said.

“Tolerance. Tolerate your religion and respect it,” he added.

Why the coyness now that he’s president?

In the 2016 campaign season, a video of Duterte making crude remarks about the rape of an Australian missionary in Davao City went viral and turned public opinion against him.

US Ambassador Philip Goldberg shared his opinion about the rape remarks in a televised interview, saying, “Statements by anyone, anywhere that either degrade women or trivialize issues so serious as rape or murder are not ones that we condone.”

Duterte has insisted Goldberg was messing with the country’s elections by making a comment that reflected badly on one of the candidates: himself.

He hasn’t gotten over Goldberg’s words. As recently as his October 25 speech in Pasay City, he was still talking about Goldberg’s supposed transgression.

“You know, I did not start this fight. They started it. Remember when this began? In the elections, I made a comment, a narration of an actual event which happened in Davao and which was covered by all media outlets there. Then the Ambassador said something not very nice. You are not supposed to do that, because in an election of another country, you should be careful with your mouth,” he had said in a mix of English and Filipino.

Though Duterte is not likely to reveal his preference between US presidential candidates now, many are no doubt making educated guesses on who, between Clinton and Trump, he will get along with better.

After Duterte’s open hostility to President Barack Obama and what it has meant for Philippine-US ties, what lies ahead for the next US president? – Rappler.com