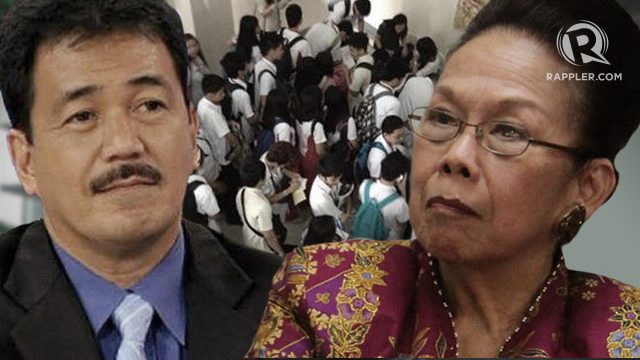 Patricia Licuanan has a history of uttering the most controversial statements as chair of the Commission on Higher Education (CHED), and her latest this week is from a television interview where she talked about the challenges of implementing a tuition-free policy that comes with a whopping P8.3-billion allocation.

“The poorest of the poor are not yet in college, they have been knocked out long ago, so you know, that is a concern of ours. And those who get into college…only 8% [belong to the poorest quintile], so it’s not going to benefit the poor, so we’ve got to do something much more. It has to be studied very carefully,” she said

This statement riled many, including Senator Paolo Benigno Aquino IV who did not mince words as he called the Commission “out of touch” for making such claims. (READ: Higher budget, free tuition in state colleges: Easier said than done)

But another government official from within the CHED itself used stronger words to describe Licuanan’s remarks: “insensitive and elitist.”

“Even if only 8% of students currently enrolled in higher education are poor, as Licuanan claims, the P8.3-billion infusion would still help close to 150,000 poor students complete their education. The new funding will also alert more students from poor households that they can enroll in universities,” CHED Commissioner Prospero de Vera III said in a statement sent to the media on Saturday, January 21.

De Vera, the first Duterte appointee in the Commission, said he found it “surprising and ironic” for the “CHED leadership” to call the P8.3-billion an “insufficient” allocation that “won’t help poor students,” when CHED officials have been asserting for the national government to increase its investments in higher education.

“Besides, what was the basis to say that only 8% of the poor are enrolled in higher education? How is ‘poor’ defined? And are the current tuition rates in the 114 state universities and colleges (SUCs) prohibitive only for poor households?”

To partly answer this question, we were told that the 8% figure came from a CHED study in 2015.

“We at the UniFAST secretariat did our own calculations using the [Annual Poverty Indicators Survey] 2014 data and it showed ‘students belonging to the bottom 2 deciles of the population comprise 7% of SUCs students’,” Nicki Tenazas, lead consultant at Unified Student Financial Assistance System for Tertiary Education (UniFAST), added.

But whatever the latest figure may be, Tenazas said CHED is “making sure…the financially disadvantaged will be the priority in the implementation of the free tuition policy, in line with the order of the President.”

By the end of De Vera’s two-page statement, he called on his own agency to immediately draft the implementing rules and regulations of the tuition-free policy “instead of questioning the impact” of the P8.3-billion allocation.

What’s ironic is De Vera’s statement, which bore the letterhead of the Commission, was sent to the media on Saturday through Malacañang’s media mailing list, with the subject “Press Statement from CHED.”

But the Office of the CHED Chairperson – where most of the Commission’s press releases come from – did not have prior knowledge of De Vera’s statement.

Asked to comment on the commissioner’s scathing words, our source from Licuanan’s office said the chairperson is “not interested in commenting at the moment.”

“Definitely we are implementing the free tuition [policy] and CHED wants to do it well and to the rightful recipients,” the source added.

In fact, Licuanan will meet Aquino – chair of the Senate committee on education, arts, and culture – next week to discuss the issue at hand.

Will she also meet with De Vera to discuss their differences? They may have more issues to talk about beyond the tuition-free policy; De Vera, after all, is the top pick of some CHED officials to act as officer-in-charge in place of Licuanan.

The embattled chairperson was told in December 2016 to stop attending all Cabinet meetings of the Duterte administration. This raised speculations she would resign like Vice President Leni Robredo.

But it looks like the chairperson is not going anywhere, given her determination to implement the tuition-free policy and “whatever is the law” – even if she has issues about it. – Rappler.com