Apr 9, 2017 11:41 AM PHT
Pia Ranada
Facebook Twitter Copy URL
Copied
The dismissal of an undersecretary trusted by Cabinet Secretary Jun Evasco is the first major outward sign of a power struggle within the Palace 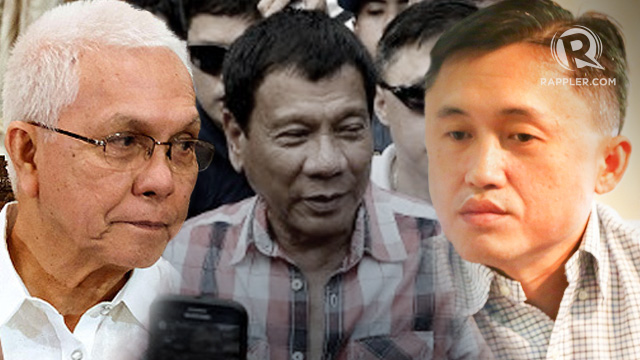 A rift may be widening between two of President Rodrigo Duterte’s trusted men, if developments in the National Food Authority (NFA) issue are any indication.

The first major outward sign was the dismissal of Palace undersecretary Halmen Valdez, who works under Cabinet Secretary Leoncio Evasco Jr as his representative in the NFA Council, a 10-member body tasked with making decisions to be implemented by the NFA management.

Duterte’s move effectively deprived Evasco of his trusted champion and foot soldier in the NFA. As Evasco was building a case to fire NFA Administrator Jason Aquino, it was Valdez who coordinated with the NFA Council in his behalf. (READ: Dismissed Usec Valdez to Duterte: Probe ‘NFA syndicate’)

Evasco trusts and values Valdez because of their years working together in Bohol. Their relationship began over two years ago when Valdez, who hails from Balilihan, Bohol, asked Evasco, then an admired long-time mayor of Maribojoc town, for advice on local elections since she planned to run for local office.

Valdez used to work for Senator Cynthia Villar on agriculture and food security issues. Later on, her expertise on the sector was recognized when she was assigned to the Office of the Presidential Assistant on Food Security and Agricultural Modernization under the Aquino administration.

Evasco was reportedly so disappointed with the President’s decision to fire Valdez that he vowed to let Duterte know he had made “a very big mistake” the next time they see each other.

If one goes by the President’s public statements alone, he distrusts Valdez because she wants rice importation, which he thinks will disadvantage local farmers whose products can’t compete with cheaper rice from abroad.

But firing Valdez won’t stop rice importation totally because even NFA’s Jason Aquino, whom Duterte appears to be siding with on the issue of permits for private rice importers, wants to import rice but through a different scheme: government-to-government transaction.

Valdez only wanted to extend permits given to private importers under the minimum access volume (MAV) scheme, an extension granted by the NFA Council but denied by Jason Aquino, who claims the private importers are all part of a cartel.

Aquino, a retired Army officer, has a direct line to Special Assistant to the President Bong Go. He is supposedly a good friend of Duterte’s eldest son, Paolo Duterte.

Go was in the chopper with Duterte when a discussion on the rice importation issue took place. By the time the chopper was landing in Nueva Ecija, the discussion had supposedly convinced Duterte to make a call to Malacañang to say Valdez was fired.

There’s one other reason why Aquino is suspected of having a direct line to Go.

A month before his official appointment papers were signed on December 29, 2016, Aquino already had a copy of the papers. He made a visit to the NFA head office showing the papers to personnel. The document bore Duterte’s signature but lacked a date, the official President’s seal, and stamp of Malacañang.

Sources in the Palace suspect the document was given to Aquino by Go.

The document gave Aquino the authority to make decisions and give instructions as NFA administrator though he had not yet been formally appointed.

Aquino’s connection to Go may explain his brazen defiance of Evasco. Aquino, who is vice chairperson of the NFA Council while Evasco is its chair, has repeatedly cancelled the council’s regular meetings and bypassed the council’s authority, despite a presidential decree that says the council has the authority to exercise corporate powers of the NFA.

Evasco, in a confidential memorandum to Duterte which was obtained by Rappler, accused Aquino of “directly proposing to the President” matters on NFA policies and decisions on rice importation, decisions which are up to the NFAC to decide as a collegial body.

While Aquino seems to enjoy direct access to Duterte, Evasco is smarting from his lack of it.

Evasco, who longed to give Duterte his side of the issue, went to the Ninoy Aquino International Airport Terminal 2, to catch the President as he arrived from Thailand early morning of March 23.

In his hands were multiple copies of a confidential memorandum that laid down all the reasons why he thought Aquino should be removed from his post. Unfortunately, Evasco was unable to give the document to Duterte himself. He entrusted it, instead, to Go. Those in his camp suspect Go never gave Duterte the document.

Out of all his Cabinet officials, Go and Evasco can claim to have worked with Duterte the longest. Evasco was Duterte’s chief of staff in his first years as mayor and was instrumental in Duterte’s 2016 electoral victory as his campaign manager.

Go has been Duterte’s aide since 1998. Because Duterte does not bother with cellular phones or other modes of communication when it comes to work, Go is the only way to reach the President. He is known as the “gateway” to Duterte. – Rappler.com