Apr 19, 2017 10:30 PM PHT
Patty Pasion
Facebook Twitter Copy URL
Copied
The conferment of the doctorate degree on the Vice President comes as President Rodrigo Duterte turns down a similar offer from the University of the Philippines 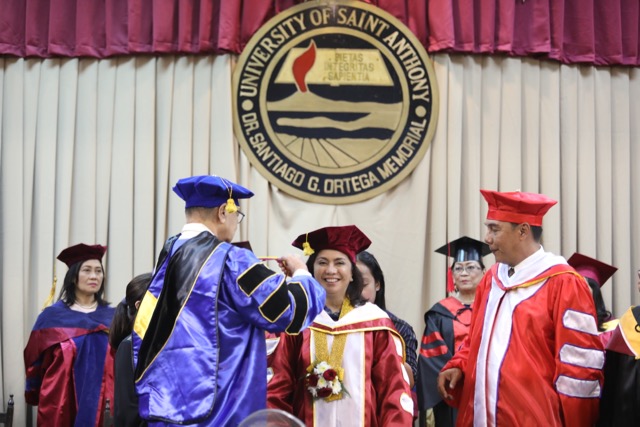 Robredo received the Doctor of Humanities  honoris causa during the 70th Commencement Exercises of USANT.

“It is with deep gratitude and humility that I accept the honorary degree of Doctor of Humanities that this University has conferred on me. My prayer is to be worthy of the honor in all that I do and in all that I am,” Robredo said in her speech.

She encouraged USANT graduates to rise above adversities and disruptions that will confront them as they face the “real world.”

“Our beloved country will never be free of adversity,” said Robredo, citing poverty, malnutrition, unemployment, calamities, and insurgency as among the countries’ “most serious challenges.”

Amid “extraordinary times,” she dared the graduates: “Are we prepared to be that person? Are we prepared to make our own mark? There are only two outcomes for all of us: either we are part of our nation’s problems or part of the solution.”

Based on a Facebook post of the Office of the Vice President, the degree was awarded to Robredo “in recognition of her exemplary achievements as a leader, a champion of human rights, a public servant, and a Bicolana by blood and heart.”

Prior to public service, Robredo was a long-time public interest lawyer for alternative law group Saligan. It led her to work on the issues of grassroot communities.

Robredo’s conferment came amid the controversial plan of the University of the Philippines Board of Regents to award President Rodrigo Duterte an honorary doctorate degree in Law, as part of university tradition.

This has met strong opposition from UP students and graduates, citing the spate of extrajudicial killings brought about by the President’s war on drugs . Duterte has since turned down the offer even if the premiere state university has yet to formalize it. (READ: Who proposed honorary U.P. degree for Duterte?) – Rappler.com