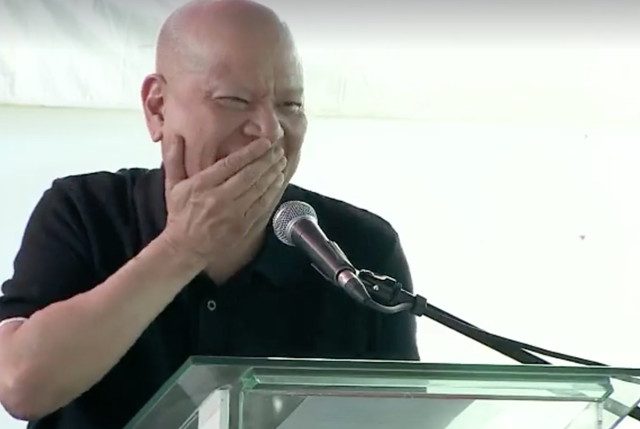 What do you do when a President can’t start his speech because you’re late?

This was exactly the predicament of top Filipino businessman Ramon Ang on Friday, May 19, when he arrived late for a housing project’s groundbreaking ceremony in Davao City, also attended by President Rodrigo Duterte.

Ang, San Miguel Corporation chief and among the richest men in the Philippines, made Duterte wait for more than 10 minutes due to “traffic”.

Even more embarrassing was that it was Duterte himself who asked the crowd to be patient while waiting for Ang’s arrival.

Duterte said he wanted to pick up Ang himself but could not contact him.

“Hintay-hintayin na lang natin in deference to the – baka wala siyang masabi – sense of being a philanthropist. Just a little while, sandali lang naman siguro ‘yun,” said the President.

(Let’s just wait in deference to the – maybe he won’t say anything – sense of being a philanthropist. Just a little while, he probably won’t take long.)

Duterte even took it upon himself to entertain the crowd for the meantime. He grabbed a chair and sat facing the crowd. Eventually, after around 6 minutes of speaking, Ang arrived, hurrying to the stage and bowing very low to Duterte as he took the President’s hand.

While the program may have moved on, Ang obviously felt terrible about his tardiness, and he admitted so in his speech.

In the middle of it, he stopped, and with an embarrassed laugh said, “Sir, sorry po at ninenerbiyos po ako kasi na-late kami.” (Sir, I’m sorry, I’m nervous because we were late.)

The audience seemed to take it in stride as they laughed with Ang. Duterte and Cabinet Secretary Leoncio Evasco Jr also smiled at the businessman’s candor.

When it was Duterte’s turn at the podium, he did not mention Ang’s lateness, and in fact praised him.

“This Ramon, may sheer guts, by his own hard work he became a billionaire 10 times over…He gave donations, charitable endeavors but they don’t publish it,” he said.

Duterte has claimed Ang helped fund his presidential campaign even if the tycoon does not appear in his official donors’ list submitteed to the Commission on Elections.

“Ramon Ang gave me some money. Not big, not small, but enough to finance one trip here, one trip there,” the President said in December 2016 during a Malacañang Christmas party where Ang was among the guests.

Ang had been known to support the presidential candidacy of Grace Poe in the early part of the campaign season.

But his support for Duterte seems to have paid off. Ang remains in the administration’s good side. – Rappler.com