Sep 13, 2017 5:56 PM PHT
Bea Cupin
Facebook Twitter Copy URL
Copied
How did your representative explain his or her stand on the controversial move to slash the CHR budget for 2018 to a mere P1,000? 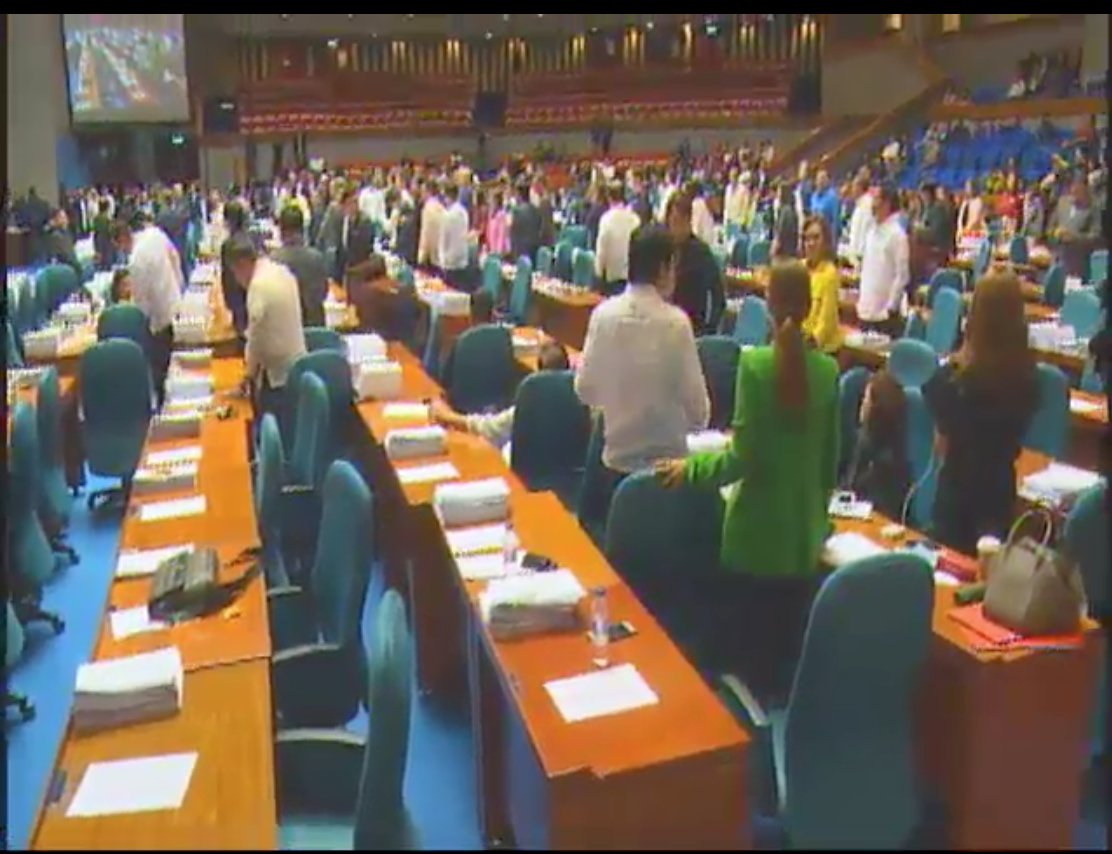 When 32 legislators – a mix of majority, minority, and opposition bloc members – stood up to oppose the House majority’s move to allocate only P1,000 for the Commission on Human Rights (CHR) in 2018, the instant question on most netizens’ minds were: “Who are they?”

While no official record of the viva voce (literally, oral rather than written) exists on House records, plenary staff, journalists, and social media users took the time out to identify, as best as they could, the legislators who stood up – literally – for a Constitutional body created to check on abuses by the state.

And then, the inevitable question: “Where was [insert name of district or sectoral representative here]?”

Here are some of their reasons for voting yes or no, abstaining, or being absent from the vote altogether:

Albay 2nd District Representative Joey Salceda: “After defending 29 agencies I was resting when these were voted on.” Salceda added that he doubts the House’s final version of the 2018 budget would only leave P1,000 for the CHR. “They will most likely be restored. These are vital institutions,” he said. Small committees will be tasked to reconcile amendments to the proposed measure before it is up for 3rd and final reading.

Ako Bicol Representative Alfredo Garbin: “[I] did not participate in the voting giving CHR P1,000 budget as a sign of protest… [I] want CHR as a constitutional office to fulfill their constitutional mandate in safeguarding human rights for all the Filipino people and checking abuses and violation of due process on the part of the instrumentalities and agents of the government.”

Ako Bicol Representative Christopher Co: The legislator differed from his colleague in the party-list, and quoted Pangasinan 2nd District Representative Leopoldo Bataoil in explaining his take on the issue. Bataoil said that it was his “experience, belief and observation that the CHR is more inclined to persecute those in the service. When our soldiers and poliscemen were mutilated no one among the CHR stood up to investigate the enemies of the state.” The Pangasinan legislator added that should the bicameral committee later decide to reinstate the budget, he will respect the decision. “That is one of the statements of my fellow congressman. And I’m convinced to vote for it. We have the same reason,” said Co, whose staff said was in China at the time of the vote.

(Editor’s Note: An earlier version of this story attributed the quote to Ako Bicol Representative Christopher Co, when he actually just quoted Pangasinan Representative Leopoldo Bataoil in explaining his stand.)

Ifugao Representative Teddy Baguilat: “Disappointed we gave CHR a P1,000 budget. Disappointed in myself [since] I was not around to vote against the cut. I apologize to the Filipinos,” he said in a tweet. The legislator, a staunch critic of the President, added that he should “not have stepped out of the plenary to meet constituents… unforgivable.”

Batangas 6th District Representative Vilma Santos-Recto: Through a tweet by her son, actor Luis Manzano, the former Batangas governor said she is against slashing the CHR’s budget particularly because there is “so much crime/EJK (extrajudicial killings).” She skipped plenary debates that day because she was not feeling well.

CIBAC Representative Sherwin Tugna: “CIBAC Party-List and I did not vote in favor of the proposal to allocate P 1,000 budget for the CHR,” said the legislator in a tweet. Tugna said that since voting on the CHR budget was “pushed to almost the last item on the agenda,” he was unable to make it inside the plenary when voting happened. “Had I been there, I would have registered my NO vote against the motion to give P1,000 budget to CHR for 2018,” he added.

Zamboanga City 1st District Representative Celso Lobregat: “If you recall during the deliberations of martial law in Mindanao, I rose on the floor to highlight the CHR’s bias towards alleged violations of soldiers and policemen. What about the human rights violations committed by terrorists and rebels? Mamasapano and the Marawi siege are clear examples,” he said in a text message to journalist Julie Alipala, in explaining his vote to slash the CHR budget.

Iloilo 1st District Representative Richard Garin: “I voted ‘Yes’ to reduce the budget of the CHR, but my ‘yes’ is geared towards the chair of the Commission,” he told journalist Prince Golez in a text message. Garin explained that while he “is not satisfied” with CHR chairman Chito Gascon’s performance, he believes in the performance of rank and file CHR employees. “That is why I am sure that the CHR budget for personal services, especially salaries, will be reconsidered and restored,” he said.

Iloilo 4th District Representative Ferjenel Biron: “I was not able to vote because I had to leave earlier for another meeting,” he told Golez in a text message. Had he been there, Biron said, he would have voted against the motion to slash the CHR budget.

Magdalo Representative Gary Alejano: “Bilang isang dating sundalo, malaki ang naitulong ng CHR upang lalong mapaintindi sa kasundaluhan ang konsepto at kahalagahan ng karapatang-pantao,” said the legislator, a former Marine and current member of the House opposition bloc. He added: “It is unfortunate that the House of Representatives has practically condoned widespread violations of human rights in the country today and has lost its power and mandate under the check and balance concept of our democracy. Pinapayagan nating maging diktador ang pangulo. We can only expect more violence and death under this administration.”

BUHAY Representative Lito Atienza: “Madaling sabihin, madaling mamintas. Kapag ito po ay inabolish natin ngayon, walang mapupuntahan ang ating bansa,” an emotional Atienza said as he opposed the majority motion. The minority member added: “Sapagkat ang problema natin ngayon ay violations of human rights. So the commission should not be given P600 million, they should be given maybe P2 billion so that they can function properly.”

Albay 1st District Representative Edcel Lagman: “In the midst of unabated extrajudicial killings, torture, enforced disappearances, and other human rights violations, it behooves Congress to ensure that the CHR continue to exercise its constitutionally mandated powers and functions,” Lagman, a member of the opposition bloc, said.

Dinagat Islands Representative Kaka Bag-ao: “I, as a human rights advocate and as the representative of Dinagatnons in Congress, cannot – in good conscience — vote in favor of a national budget that does not give any value to HUMAN RIGHTS,” she said, in voting no to the motion.

Cebu City 1st District Representative Raul del Mar: “I wonder how we are looked by the global community,” he said, as he pointed out that many – including House members – seemed to misunderstand the CHR’s functions. Del Mar, who sponsored the CHR budget, voted against the motion.

Agusan del Norte 1st District Representative Lawrence Fortun: “The CHR is an independent constitutional commission whose fiscal autonomy we should recognize and respect,” the legislator told Rappler, explaining his vote against the budget cut. He added: “It is there to promote human rights and check on excesses that may be committed by state authorities against citizens. If Congress has observed certain shortcomings, then we should utilize our legislative powers, including the power of the purse, to address these deficiencies. Congress should strengthen democratic institutions, not weaken them.”

Caloocan City 2nd District Representative Edgar Erice: “The House action of reducing the CHR budget simply shows lack of respect for the constitution,” he said, explaining his vote against the motion to slash the budget. “It also shows that most of us in the House don’t understand the mandate of the CHR, or many have chosen to be blind followers.”

Muntinlupa City Representative Rufino Biazon: “The voting was not scheduled and unanticipated,” said the legislator, explaining why he was absent from the voting. If he had been present, Biazon said he would have voted against the budget cut. “I have always believed in keeping state forces in check to ensure that abuse of power and authority does not go unchallenged. The Constitution provided such a mechanism through the Commission on Human Rights.”

Senior Citizens Representative Milagros Aquino-Magsaysay: Was absent during voting at plenary. “The main concern of [Aquino-Magsaysay] on the budget slash, however, was the retirement pension package of the CHR employees that is a part of the proposed 2018 budget,” said her staff.

Negros Occidental 3rd District Representative Alfredo Benitez: “If I was present during the CHR budget deliberations, I would have lobbied the leadership and to my colleagues to spare the reduction of CHR’s budget in the first place,” he said, adding that he was out of the country during the September 12 vote. Benitez, a member of the majority, said the budget cut as a “political statement… aimed to show disapproval over the selective investigations conducted by the CHR.” He said he was against the cut if the intention was to abolish the Constitutional body.

Camarines Sur 3rd District Representative Gabriel Bordado: “In conformity with the presidential pronouncements and the constitutional provisions, I believe that it will be in the best interest of the country to approve the P623.38 million originally earmarked for the CHR and not the P1,000 as proposed,” he said in voting “no” to the budget cut. The legislator also cited previous pronouncements by Duterte himself in explaining his vote.

Akbayan Representative Tom Villarin: “This is an unconstitutional move to defund CHR and an assault to democratic institutions. I called for nominal voting but the deputy majority leader proceeded with a headcount. So frustrating but fight goes on!”

Bataan 1st District Representative Geraldine Roman: “To put all speculations to rest, let me make it clear that I was not at the House of Representatives last September 12 to cast my vote. Not being there, it was impossible for me to have cast my vote. Had I been present, I would have upheld the importance of such a crucial government agency like the CHR.”

We’ll update the list as more explanations come in.

Despite the House’s decision, this does not automatically mean that the CHR gets only P1,000 for 2018. Once the House passes the proposed 2018 budget on 3rd and final reading, the Senate will get a copy of the bill.

The Senate is already holding its own review of the proposed budget. They passed the CHR budget at the committee level the same day the House decided to slash it dramatically.

After both chambers are done crafting their versions of the 2018 budget, a bicameral committee – where both the Senate and House are represented – will convene to iron out kinks or reconcile differences.

The Commission’s budget, as proposed by the Department of Budget and Management, stands at P678 million – lower than 2017’s P749 million. It originally asked for a P1.723-billion budget. – with reports from Rhaydz B. Barcia/Rappler.com