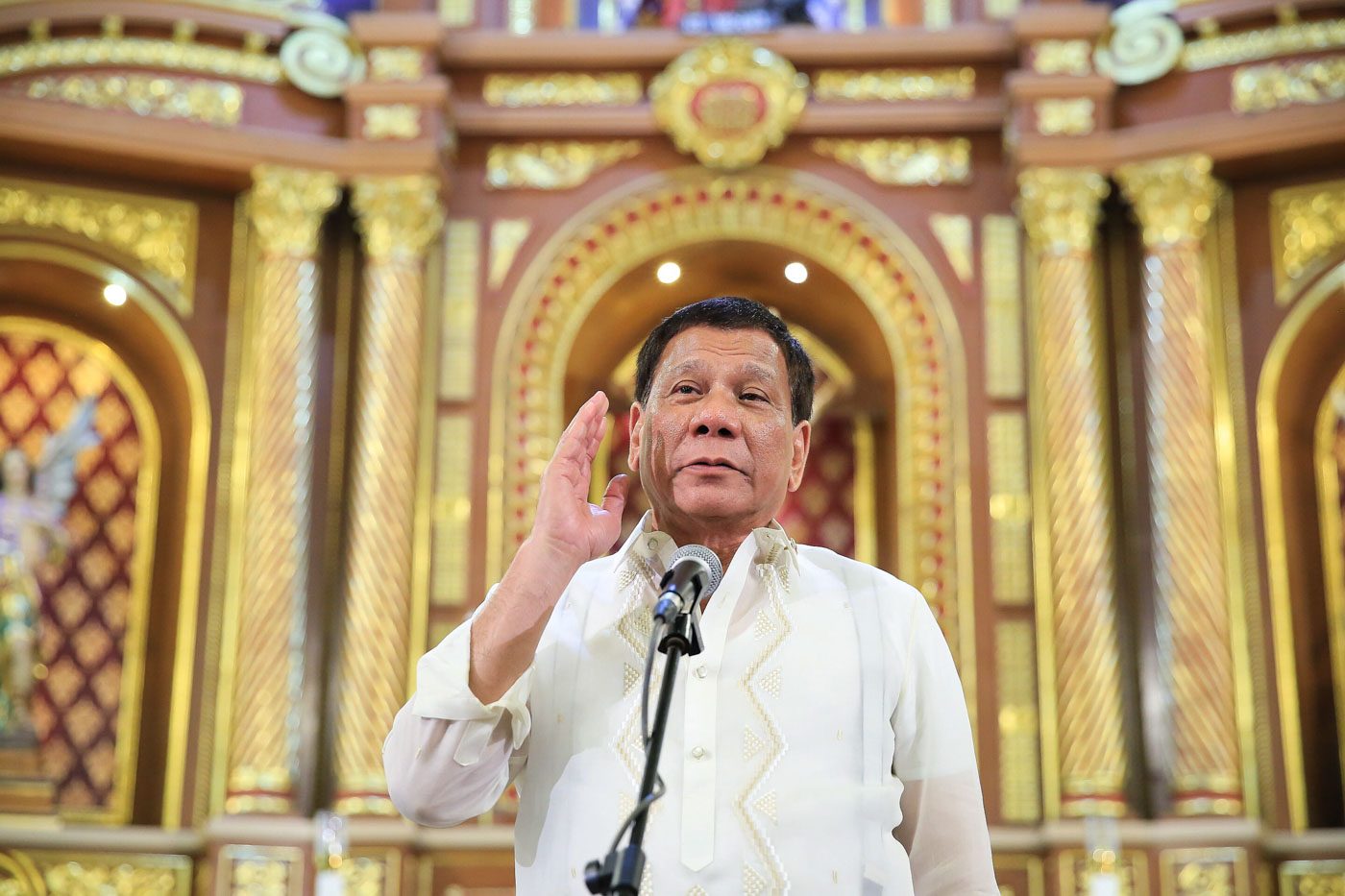 Facebook Twitter Copy URL
Copied
In recent speeches, President Rodrigo Duterte displays a preoccupation with mortality and quitting the presidency. But to what end?

Nobody can really know what President Rodrigo Duterte is thinking. One person close to him says he delights in people misreading him because it means no one can decipher his innermost thoughts.

For Duterte, unpredictability and inscrutability are aces up his sleeve.

So what can he be up to when in several recent speeches, he’s been more detailed in talking about his own death and resignation from the presidency?

In a speech on September 18 in front of public attorneys, for example, he began his talk of death by describing the downward spiral into old age.

He began by speaking of the harsh reality that after the age of 50, diseases like hypertension and diabetes set in. He supposedly told his children to leave him alone once he is no longer productive.

“Ke ma-stage 1, stage – Do not waste your money on me. I am 72. No more mountains to climb. No more challenges to meet. No more oceans to swim. ‘Yan ang sad story natin (That’s our sad story),” he told the lawyers.

Someone so old should thus not be worried about getting assassinated in the Marawi battlefield, which Duterte had visited 4 times by the time he made the speech.

He said it would be a “great privilege” to be assassinated in Marawi.

Then, curiously, Duterte launched into a detailed account of how he wants to be buried.

“My wants are simple. Sinabi ko ‘pag ako namatay…in 24 hours, bury me.’ Eh Maranao ang lola ko eh. (I said when I die, in 24 hours bury me. My grandmother is Maranao.) That’s what I did to my mother,” said Duterte.

He even knows what do with his place at the Libingan ng mga Bayani where other presidents are buried.

“I have a place there sa Libingan eh. Kasi lahat ng presidente, doon ilibing. ‘Yung slot ko diyan, ipa-lottery ko, para malibing kayo kung sinong manalo (Because all presidents are buried there. I’ll start a lottery so whoever wins gets the slot),” he said, eliciting much laughter from his audience.

The President also said he wants “no necrological services, no nothing, no religious rites.”

He just wants his corpse wrapped and then cremated. He doesn’t want a wake either.

“If you have a wake, you have to feed people. For me, there should be no wake. And the burial must be private. So don’t try to visit because you won’t be allowed in,” said Duterte in a mix of English and Filipino.

He ended his morbid talk on a sentimental note. “I was born in the serenity of the night. I will go out without any ruckus or ceremony.”

The next day, Duterte again mused on his limited time on earth, this time during a live interview on state-run PTV with broadcaster Erwin Tulfo. Death, getting a stroke, he said, are just one of many possibilities ahead.

“I’m just incidental, passing lang ako (I am only a passing thing). I may not or I may continue for 5 years, or I may not. I may die, or ma–stroke (get a stroke) or whatever. You can never tell the imponderables of life, kung anong mangyari sa mundong ito (what will happen in this world),” he said.

Yet again, the day after, on Wednesday, September 20, Duterte told Philippine National Police Alumni Association officials that he hopes he would “survive the next 5 years and we will be together.”

Moments after, in another Malacañang event, the President voiced his thoughts on the shortness of life with a bit more humor.

“Maybe ‘yung ka-edad ko (Maybe among my age group), I would be the last. Limited edition na kami eh (We are limited edition). Most of my classmates have a short expiry date,” he told government workers.

Duterte is the oldest president the Philippines has ever had, indeed the first septuagenarian. He’s admitted to a slew of health conditions, including Barrett’s esophagus, Buerger’s disease, a bad back, and constant headaches.

He’s the only president after Ferdinand Marcos whose had to deal with such health issues during their presidency.

There have been at least 3 instances when he has been out of the public eye for several days, at one point, almost a week, because of his health.

Maybe death is never far from his mind given his constant visits to wakes and the nightly reports to him of the death toll in Marawi.

The same level of curious detail can be observed in Duterte’s recent talk of resignation.

Sure, he’s spoken of resigning as early as the first month of his presidency. But in recent days, ever since he got wind of the Left organizing major rallies on September 21, he’s talked of resignation more often.

(These Leftists, idiots…They had to join the drama, ‘martial law, dictator.’ If I could only resign, if the Vice President was Gordon or Medialdea, I would have resigned a long time ago and gone back home. I’m done.)

Again, during his PTV interview on September 19, Duterte spoke of resigning as a response to the protests to be held on September 21, a day he declared “national day of protest.”

If Filipinos decide they no longer want him as president, he would quit the show.

“I will submit my resignation to Congress. But subject to the concurrence of the military. Because the military will see to it that the succession as provided by the Constitution will be followed,” said Duterte.

“I don’t know if you want a separate voting or joint. Wala akong pakialam diyan (I don’t care about that). Subject to the concurrence of the military,” he continued.

Tulfo, with a hint of frustration in his voice, asked Duterte why he is even considering resignation when so many Filipinos support him.

Duterte responded: “Because I want everybody to understand, including those supporters, hindi ako hangal dito sa (I’m not desperately clutching to this) presidency…As a matter of fact, I’d never thought that I would win.”

One can speculate all day or all year what Duterte might be up to with his constant mention of mortality and quitting.

But it’s been proven that Duterte often uses his public speeches to float ideas he is considering. Case in point, martial law.

What began as an out-of-the-blue dare to Supreme Court Chief Justice Maria Lourdes Sereno evolved into semi-dire warnings to his enemies not to “force [his] hand into it.” Then when the Marawi crisis erupted, Duterte lost no time in declaring martial law in Mindanao.

Then again, these could simply be the musings of an old man who’s lived long enough to know anything is possible and the wisdom in preparing for whatever comes. – Rappler.com