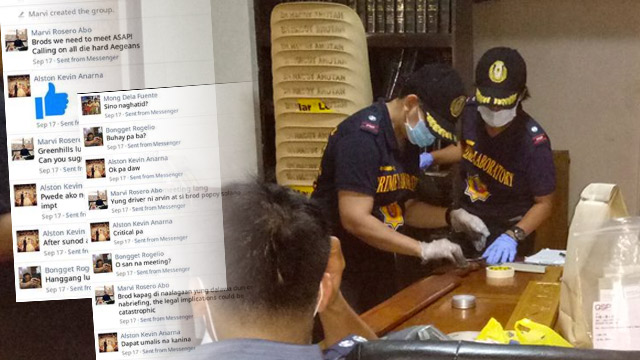 An Aegis Juris fraternity founder had promised there would be no cover-ups in the hazing that resulted in the death of Horacio Castillo III. Senators and policemen, however, think the fratman was pulling their leg.

They presented over 80 slides of Facebook Messenger exchanges, starting from September 17, when the boy fondly called “Atio” was declared dead at a hospital, until September 18, when his parents found his body in a morgue.

There were at least 28 participants identified in the chat box, some active and some not. Some appeared to be recent graduates of the University of Santo Tomas Faculty of Civil Law; most are already practicing law.

While the Messenger conversation is still up for validation and verification, Coronel said they believe it was used for a meetup at Novotel in Cubao, Quezon City, on September 17, where, he suspects, the frat members held a planning session to evade charges after the 22-year-old neophyte died from hazing injuries.

The chat revolved around protecting those who participated in the hazing, not speaking to the media, denying knowledge if and when invited by the police for questioning, and looking at the victim’s family as enemies. 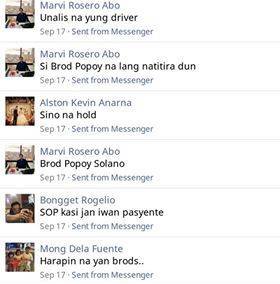 The alumni were bothered upon knowing that John Paul Solano, the fraternity brother they know as “Popoy”, was left at the Chinese General Hospital with Castillo, who was declared dead on arrival.

A user believed to be lawyer Cesar dela Fuente asked on September 17, “Sino pa naghatid (Who else brought [the body])?”

Abo added that Solano being left at the hospital could pose a threat to their safety.

“Brod, kapag ‘di naalagaan ‘yung dalawa dun or na-briefing (If they do not get watched over or briefed), the legal implications could be catastrophic,” Abo told his brothers.

Another frat brother, Brian Bangui, supposedly volunteered to fetch Solano from the scene.

It did not push through however, as they already planned a meet-up at a Starbucks branch that morning. They eventually met at Novotel. 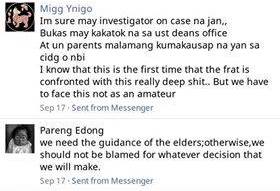 The alumni were quick to think about evidence that authorities can use against their younger companions, and themselves.

“I know that this is the first time that the frat is confronted with this really deep sh*t. But we have to face this not as an amateur,” said a user believed to be lawyer Manuel Ventura III.

First, they knew that on top of their problems was their fraternity library, which housed physical evidence of the supposed crime such as paddles believed to be used to hit Castillo.

(They might get a search warrant as early as tomorrow for the fraternity library. I hope it is already clean, that the paddle is removed.)

Manila cops got a search warrant only 10 days after, but the fraternity alumni failed to clean up their frat house.

The alumni then thought of possible documentary evidence, starting with CCTV footage covering the frat house.

Alumnus Ronald Cheng supposedly took charge of checking whether cameras recorded anything incriminating. To their relief, the user believed to be Cheng said the cameras “don’t cover” the frathouse.

It has been a month since Castillo was killed, but his belongings have not been returned. Most sought after was his phone.

It appears that the alumni had it with them, specifically, Jose Miguel Salamat.

Salamat said in the chat box on September 18 that the phone was receiving non-stop calls from Castillo’s father.

He added later that the phone was receiving text messages from the dead boy’s parents.

(Brothers, the phone is getting flooded with messages and it’s getting a lot of missed calls from his mom and dad.)

During the Senate hearing, the Castillo couple asked them to return the belongings of their son. Nobody promised the return of the items.

The fraternity members adopted an adversarial tone when they talked about the grieving Castillo family.

Anarna described Castillo’s family as “may kaya (well off)”, which prompted him to assume that they can get the search warrant in just a day.

On September 18, a user reckoned to be lawyer Gaile Caraan said: “Powerful kalaban natin.” (Our enemies are powerful.)

He later clarified that he just meant that their family was powerful.

A user assumed to be lawyer Edzel Bert Canlas said that they had a better fighting chance if they were united, which he believed they were far from back then.

“We are not to clash power versus power kasi (because) we know that if we are intact and solid we are more powerful. Kaso (However), sadly, hindi pa tayo solid (We aren’t solid yet). Concrete plans are needed,” he said.

5.  How to respond to authorities 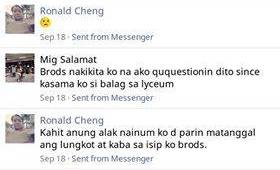 By September 18, it was apparent to them that authorities coming for them was not a question of if, but when. This made them worry.

“Brods, nakikita ko na ako qu-questionin dito (Brothers, I already see it. I will be questioned here),” Salamat started on their September 18 thread.

Canlas was quick to call for calm, advising them to deny and “never ever give any hint” if ever they get caught.

“De-deny ko ba na member ako? ‘Di ko alam gagawin ko brod (Should I deny that I am a member? I do not know what I will do, brother),” he said.

Canlas suggested that Salamat tell authorities that he will speak “in the proper forum.” 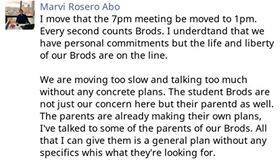 They met more than once.

Aside from the Novotel meet-up that Coronel suspected to be where the fraternity brothers planned a cover-up, the chat box revealed at least two other meetings that happened after, each with its own purpose.

First was a meeting at the house of fraternity brother Bangui, which supposedly took place the same day they met at Novotel. They gathered to supposedly craft their “stand” on Atio’s death.

The second meet-up was supposedly held the next day at the “IBP”, possibly the Integrated Bar of the Philippines building in Pasig City.

By that time, Castillo’s death had already become the top story in the news cycle, prompting Abo to hold the meeting earlier at 1 pm. The chat box did not indicate whether it pushed through. 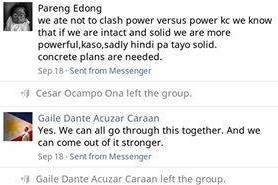 To supposedly cover up their trail, the group planned to delete their chat box every day and start anew to wipe out messages if ever authorities investigated.

“Can we leave this chat group and add again all members. At least every 24 hours. So messages will be deleted?” Anarna asked on September 18.

Caraan, Abo, and Canlas agreed. The user taken to be Lawyer Cesar Ona responded by leaving the group.

Before Caraan exited the chat box, his final message to his brothers: “We can all go through this together. And we can come out of it stronger.” – Rappler.com