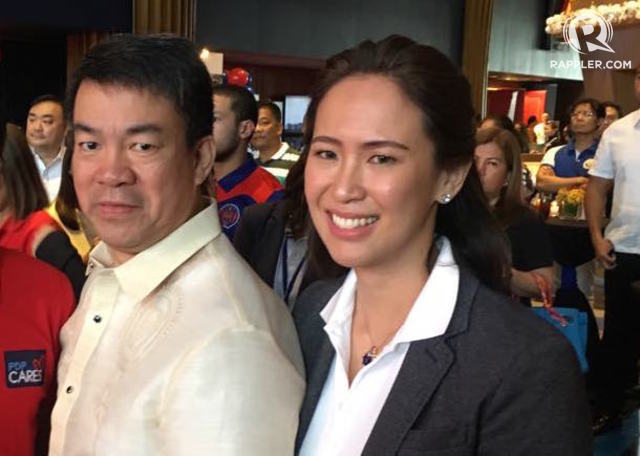 In less than a month, reelectionist Senator Aquilino Pimentel III will tie the knot with his fiancée, Anna Kathryna Yu, and the big celebration – as expected – will include big names in politics.

No less than President Rodrigo Duterte will grace the October 18 wedding of his ally at the Coconut Palace. The wedding will take place after the filing of certificates of candidacy for the 2019 elections from October 11 to 17.

In an invitation obtained by Rappler, Duterte and Special Assistant to the President Bong Go are listed among the couple’s principal sponsors.

Aside from Duterte and Go, also included are former House speaker Pantaleon Alvarez, the secretary-general of PDP-Laban, as well as party mate Senator Manny Pacquiao and his wife Jinkee Pacquiao.

Duterte is PDP-Laban chairman while Go is auditor.

Senate President Vicente Sotto III and wife Helen Gamboa Sotto are also among the ninongs and ninangs. Sotto replaced Pimentel as Senate president in May 2018.

Pimentel and Yu got a total of 9 pairs as principal sponsors. Others in the list include:

The wedding’s motif is Filipiniana. Pimentel’s barong Tagalog and Yu’s gown are both designed by Paul Cabral.

“We decided [on] October 18 because we love the date 10-18-18…and it was our first memorable date [in] 2013. We timed it [also] because it’s my birth month para isang celebration na lang (so it’s just one celebration),” Yu told Rappler on Thursday, September 20.

Asked if Yu, a former chef, is ready to be a politician’s wife, she said: “I know it’s not easy, but I’m up for the challenge, because I love the man I will marry and will support him in his mission to improve his goal for the betterment of this country.”

Pimentel’s marriage with his former wife Jewel May Lobaton was annulled in January this year. Lobaton and Pimentel got married in 2000. They have two children, Aquilino Martin and Aquilino Justo, who will serve as the ring and Bible bearers in their father’s wedding with their “Mama Kath.” – Rappler.com