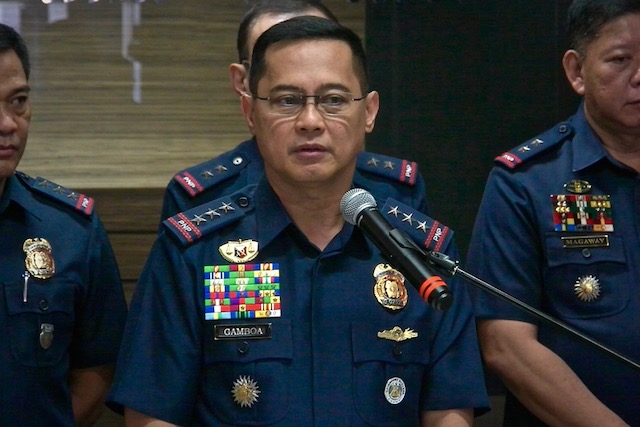 Without warning, the calls came on Sunday morning, October 20.

It was from the police’s Directorate for Personnel and Records Management. You no longer hold your position, the officer said on the other line. You have a new post as part of a revamp.

This was how most ranking generals of the Philippine National Police (PNP) were informed that there was a massive reshuffling among its top ranks as ordered by their officer in charge Lieutenant General Archie Gamboa.

“Everyone was shocked,” said one general who spoke on condition of anonymity. And understandably so, as the police’s top brass generally give each other advance information before reassignment orders are implemented.

Another general said his reassignment is a “price” he had to pay for not gaining the favor of Gamboa.

On October 20, the PNP implemented its largest-ever reshuffling of officials – a rigodon round as they call it. But this shuffle began without them knowing, and now a handful of them are grumbling that they had to lose their post in Gamboa’s bid for the PNP to please the President and the public.

Gamboa has been on a campaign to regain the President and the public’s trust after their former chief Oscar Albayalde quit over drug involvement allegations. He is one of the 3 police officials recommended by Interior Secretary Eduardo Año to replace Albayalde.

In a command conference on October 15, President Rodrigo Duterte lashed out at the PNP’s top officials over Albayalde. A source present in the meeting said the President “did not know what to do with the police” and floated the idea that they be reshuffled.

Gamboa’s revamp has been internally questioned on two grounds:

They met last Friday, October 18, and Saturday, October 19, to deliberate on the placement of the officials. Personnel from Cubos’ office made the calls on Sunday morning, and on Sunday afternoon, the new officials sat together in a command conference in Camp Crame.

Officials who saw themselves demoted questioned Gamboa’s reassignment orders. One official, Brigadier General Marcelo Morales, supposedly openly challenged Gamboa’s reshuffling during the command conference, causing a scene in the meeting. From leading the prime Davao Region police regional director position, he was reassigned as the leader of the Police Security and Protection Group.

In a press briefing on Monday, October 21, Gamboa admitted that there were heated exchanges during their conference, saying that they “had a lot of discussions.”

A reporter then asked about the sentiments of the police’s top officials, given the reshuffle, which then prompted Gamboa to give a noticeably irked response.

“We cannot afford to have our own personal sentiments. It is very important in uniformed service to have full integrity, especially among its officers. We may discuss our sentiments but it should not go out, so I should not comment on it,” Gamboa said.

He added: “I hope it’s understood that we had spoken about it, and I said it was collective, but I decided, and that’s it.”

For Gamboa, the rotation of officials was only necessary as the officer in charge of an organization in crisis. Since the start of his administration, the PNP has been pampered by President Duterte. They were given salary increases. When the PNP faced overwhelming allegations of human rights abuses, Duterte stood as their strongest shield.

Now their chief defender is hurting, while the public remains dismayed.

“We admit that the recent controversy has shaken the institution at its core. Not only has it caused displeasure from our President but some doubts on our capability and resolve to serve and protect the people,” Gamboa said.