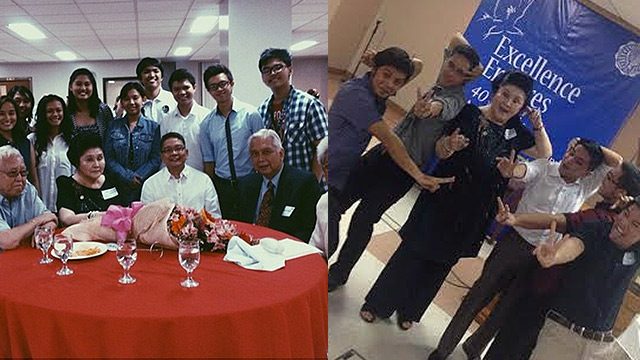 Facebook Twitter Copy URL
Copied
Some Ateneo alumni remember that the university conferred on pianist Van Cliburn a Doctor of Humane Letters degree in 1974. He was known to be close to Imelda Marcos.
When photos came out showing the president of a leading Catholic institution socializing with a woman that has long polarized Philippine politics, not a few eyebrows were raised. What was Imelda Marcos doing at a scholarship fund event in the Ateneo de Manila University?
Alumni could not suppress their outrage. Her presence was an insult, they said, to the memory of Atenean student-activists like Edgar Jopson, who fought and died during the dictatorship of Ferdinand Marcos. (READ: Edjop, Imelda Marcos, and the fear of forgetting)
It became a public relations crisis. To quickly stem the controversy, Ateneo President Jett Villarin issued a statement explaining that the Ateneo Scholarship Foundation (ASF) – a private foundation  – had invited Mrs Marcos for its 40th anniversary.

Mrs Marcos was invited because of a donation that helped start the foundation. A Van Cliburn piano concert she organized in 1974 yielded proceeds of around P6 million according to Marcos’ staff. Perhaps as a sign of gratitude, and many may have forgotten this bit of historical information, the Ateneo conferred on Cliburn an honorary degree – a doctor of humane letters degree – in 1974. The former prime minister Cesar Virata was another awardee that same year.

Villarin sought to assure alumni that Ateneo has not forgotten the Marcos years. He apologized for “any doubts…on the mission of the school.” But critics hit the apology too, saying it was rude to publicly denounce an invited guest.
Mrs Marcos’ staff said she would not have come if she were not invited. “We were invited only a day before…She could not refuse. She wanted to see the people that the foundation has helped.”
Mrs Marcos herself would rather not comment on the hasty apology that said, in effect, that she was not welcome and that it was a mistake inviting her. “Lalaki pa ang isyu,” her staff said. “Walang pulitika. Maliwanag ang intensyon ni Mrs Marcos na tumulong.” (The issue will just blow out of proportion. There was no politics in the visit. Mrs Marcos only wanted to help.)
The former First Lady indeed did not talk politics in her speech. Instead, she talked about meeting Mao Zedong and Moammar Gaddafi, and how she put up various foundations. She urged scholars to be creative, to have a heart for the poor, and to use their talents for good.
Guests clapped, to be polite. But the mood wasn’t altogether jovial. A source who was present at the event said many were surprised to see Mrs Marcos. Some professors did not bother trying to be polite and sat at the back, away from the cameras and the photo-ops.
One very prominent Jesuit was apparently squirming in his seat, “clearly uncomfortable,” during Imelda’s speech, said one who was present during the event. Another high-ranking official was also asked to sit beside Mrs Marcos, but managed to politely decline the offer.
Was Mrs Marcos’ presence unexpected? Probably. Not even the school’s guards knew she would be there. Still, she wasn’t exactly the center of attention. No one went out of his or her way to make her feel unwelcome. Those who were uncomfortable seeing her there simply avoided her or left quietly.
What about the photo of the 5 boys, who happened to be valedictorians of the university? Might have been done out of politeness or maybe they were star-struck, who knows, whispered the same person who was at the event. For sure, it was not meant to be the Marcos victory sign, but a jeje one, referring to a Philippine pop culture phenomenon, the source said.
No one seemed to think there would be a backlash. “It was a social event, and we didn’t think much of Imelda’s presence after the event…In hindsight, we should’ve thought that it was bound to attract controversy.”
And in the middle of all of this, the foundation that made the controversial move of inviting Mrs Marcos in the first place has kept quiet. But we gathered it was a Jesuit’s idea. – Rappler.com