Sep 20, 2014 4:58 PM PHT
Rappler.com
Facebook Twitter Copy URL
Copied
The possibility is raised at a public forum attended by both lady lawmakers. They get some instant 'endorsements' in the process 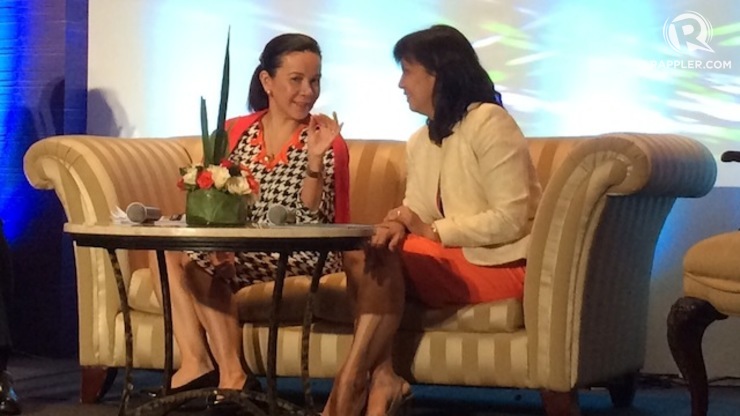 Is there an emerging tandem between Senator Grace Poe and Camarines Sur Third District Representative Leni Robredo for the 2016 presidential elections?
At the 2014 Integrity Summit held in Makati on Friday, September 19, where both legislators were invited as speakers, a question was tossed from the audience: Given the choice between a seasoned executive with great experience whose integrity is under a cloud, and another candidate who is comparatively a newcomer but has unblemished integrity, what is your advice to the voters? Which criteria should have greater weight, integrity or experience?
Robredo, the first to answer, quipped: “Is that a trick question? Because if I choose the latter, you might think I am either promoting myself or Senator Grace Poe.”
The lawmaker said she believes a president should have a mix of both qualities.
Poe, for her part, said she believes destiny also plays a role.
“In any situation, people chasing after that, especially the presidency – which I believe is ordained in a way – will trip over himself. It takes out the very essence of why we should serve a position,” Poe said. “It will be very difficult and unrewarding if people actually desire it. It’s more uncommon if you want to be realisitic about what the job entails.”
Former chief justice Artemio Panganiban, who was also part of the panel of speakers, was asked to chime in.
“Between an inexperienced person with personal integrity and an experienced person with no personal integrity, I think there is no choice there. You cannot choose low integrity, you cannot choose corruption, you cannot choose dishonesty,” Panganiban said.
He added: “You can only choose between the two ladies. You can choose both of them – one for president, and the other one for vice president.” His playful answer received hearty applause from the audience.
The names of Poe and Robredo have been cropping up as possible contenders of Vice President Jejomar Binay for the presidential race in 2016, amid reported concerns from Liberal Party allies about the chances of known frontrunner Interior Secretary Manuel “Mar” Roxas II. (READ: How do you solve a problem like Mar Roxas?)
A Pulse Asia survey in July showed more people will vote for Poe as president in 2016 compared Roxas – even if President Benigno Aquino III endorses him.
Meanwhile, various groups have been pushing Robredo to seek a higher position – even the presidency itself – in 2016. In 2013, it was public clamor fueled by the death of her husband, Interior Secretary Jesse Robredo, that convinced the lawmaker to seek a congressional seat.
The banter during the open forum prompted another speaker, Budget Secretary Florencio “Butch” Abad to quip at the beginning of his speech: “For a while I thought this was the wrong forum. It seemed for a while this was the launch of the Makati Business Club’s presidential tandem for 2016. Pero mukhang pwede (But there seems to be a potential).”
Abad served as the campaign manager of the Liberal Party in the 2010 elections.
Both Poe and Robredo have so far said they have no plans of seeking a higher position in 2016. They are both in their first terms as elected officials. – Angela Casauay/Rappler.com