‘Presidentiables’ flock to PMA homecoming a year before polls They are incumbent Senators Antonio Trillanes IV and Alan Peter Cayetano of the Nacionalista Party, and former senators Panfilo Lacson and Interior Secretary Manuel Roxas II. All of them have found their names in presidential polls.

Lacson and Trillanes are former soldiers who belong to PMA classes 1971 and 1995, respectively.

Roxas and Cayetano were adopted by PMA classes 1984 and 1992, respectively. 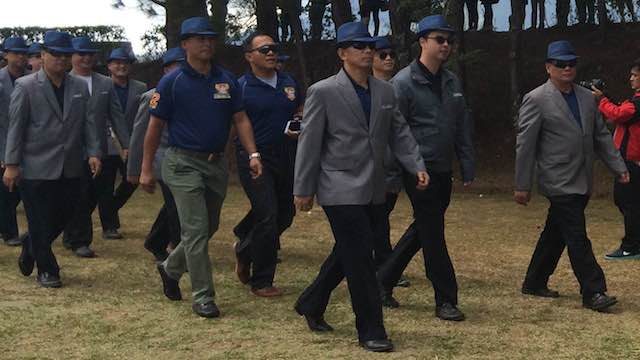 The frontrunner in the presidential polls, Vice President Jejomar Binay, was also adopted by PMA Class 1988. But he was not seen during the PMA homecoming.

In the wake of the public outcry on the death of 44 elite cops in Maguindanao in January, however, the coming 2016 elections was not the hottest issue in the minds of the PMA alumni.

Judging by the media attention, the star of the homecoming, actually, was police OIC chief Deputy Director General Leonardo Espina. The general gained public sympathy – and along with it popularity – after his emotional appeal for justice for his fallen men.

Next time around, senators. – Rappler.com