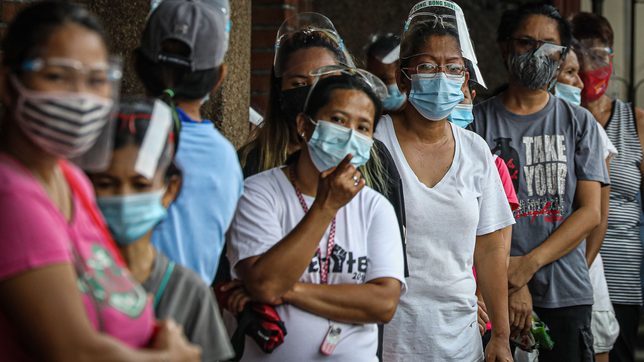 People queue for free provisions at the Immaculate Heart of Mary Parish in Quezon City, which houses the Mahinhin Community Pantry on Wednesday April 21, 2021. Photo by Jire Carreon/Rappler

You must have noticed by now that in the daily tallies of new COVID-19 infections, the numbers are relatively low on Mondays, Tuesdays, and Wednesdays. On these days, the cases hover around 4,000 to 5,000.

Those, however, could be artificial declines due to the non-operation of testing hubs and the delays in data transmission.

On May 25 – which fell on a Tuesday – the number of cases dropped to 3,972. This, however, didn’t mean that the pandemic curve was already flattening. (READ: EXPLAINER: Understanding the ‘waves’ of coronavirus infections)

The Department of Health (DOH) has explained that the relatively low number of cases on the first three working days of the week are due to testing laboratories that are either closed or unable to submit data on time during weekends.

The cases reflected in a daily bulletin are based on tests conducted two days before.

(We would notice lower numbers, usually on Mondays to Wednesdays. It’s not just due to non-submission of laboratory results. There are laboratories that do not operate on Saturdays and Sundays.)

For instance, the Philippines logged 4,777 new infections on Tuesday, June 8, after days of over 7,000 cases daily. The DOH noted in its bulletin that while all laboratories were operational on Sunday, June 6, 10 testing hubs were not able to submit their data on time.

On April 14, which fell on a Wednesday, the country logged only 8,571 cases, following a recording-breaking surge in infections in the previous days. On April 2, new COVID-19 infections peaked at 15,310.

Vergeire explained that the weekend before April 14, 36 laboratories were not operational, thus affecting the case reporting.

According to Rappler monitoring based on the DOH data, Tuesdays and Wednesdays have the relatively low number of reported cases of every week.

We certainly hope no real numbers are lost given the delays in case reporting. Filipinos deserve to get a real picture of the pandemic. – Rappler.com