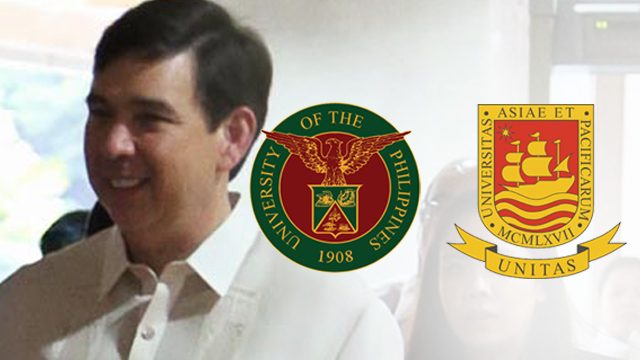 Editor’s Note: This is part of our continuing fact-check of educational backgrounds of Philippine senators.

MANILA, Philippines (UPDATED) – For many years, Senator Ralph Recto recalls, he did not check his bio-data as posted on the Senate website. He has been senator for 11 years and is running for re-election in 2016.

Here’s what was posted in his resumé on the Senate website: 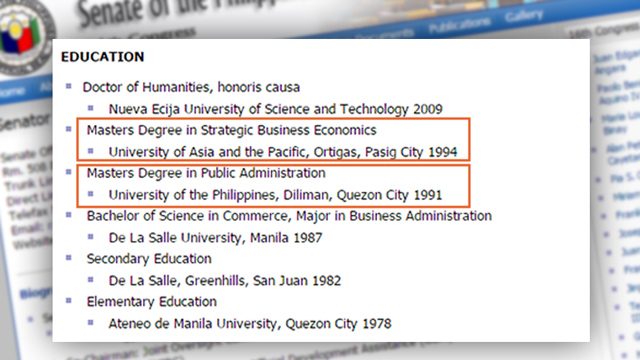 This was in his bio, also on the Senate website: 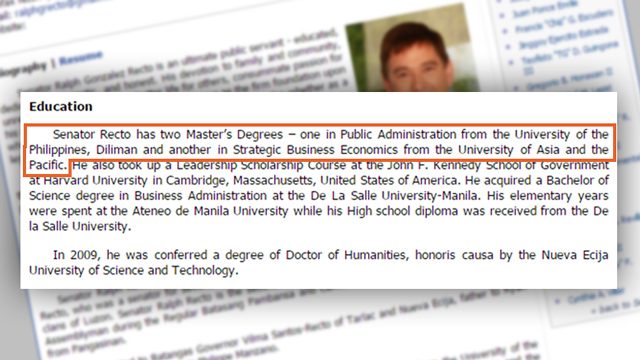 We discovered, as part of our fact-checking on the educational backgrounds of senators, that Recto did not complete both postgraduate degrees.

As for his master’s degree in strategic business economics, it turns out that Recto took an 11-month course at the UA&P, earning a Certificate in Business Economics or CBE. This is part of the Strategic Business Economics Program (SBEP) offered by the School of Economics. UA&P describes this program as its “flagship program exclusively for top management executives.”

Chichi Fajardo Robles, head of UA&P corporate communications office, explained to us that Recto “initially enrolled in SBEP, a certificate course offered by managers and executives to UA&P School of Economics. He intended to proceed to MA in business economics [also part of the SBEP] by writing a thesis. This he wasn’t able to complete.”

Thus, Fajardo said, Recto “still hasn’t earned his MBE [master’s in business economics] degree. This explains why his name did not appear in any printed program of the Graduation Ceremonies that year or any other year.”

Recto, like all graduates of the SBEP, is considered an alumnus of the UA&P, Fajardo added. “The University of Asia and the Pacific,” she said, “is proud of Sen. Recto’s achievements as a legislator and public servant.”

After these conclusive findings, we e-mailed Recto to ask for an interview and get his side. A day after we sent our request, he called and apologized. “I plead guilty,” he said, “and I take full responsibility. There was no intention to misrepresent. I’m sorry.”

He said that the last time he checked his bio-data was possibly when he was a congressman (1992-2001). He asked his staff to make the corrections, he said.

The last we checked, his resumé remains unchanged and his bio-data still contains the errors.

Recto was also not listed among the graduates of De La Salle University where, his resumé says, he received a Bachelor of Science in Commerce degree in 1987. We checked 1987 and other years but we couldn’t find his name.

Recto told us he graduated from the College of St Benilde (CSB) in 1989, with a degree in BS Commerce. The CSB is part of the De La Salle University.

Records of the CSB for the BS Commerce graduates in 1989, however, did not yield Recto’s name. We then asked the senator to provide us a photograph of his diploma which his office quickly did. They found it in his office in Batangas, where his wife, Vilma Santos, is governor.

The diploma was issued by the DLSU in 1989 for the course BS Commerce.

Going through this experience of verifying alumni records, we asked lawyer-academics what the policy of private universities should be. They require the consent of the subject of inquiry before releasing any information.

Victoria Avena, professor at the UP College of Law, said that private universities do not have the obligation to share information on their alumni with the public. But it is “ideal” for them to set a policy disclosing the educational records of public officials.

Avena said that the public’s best bet is to inquire from the Office of the Ombudsman: “They are in a position to request information from the universities and they should release this to the public.”

Jose Manuel “Chel” Diokno, dean of the DLSU college of law, considers this a “gray area.” But he doesn’t think universities should “protect” government officials by not disclosing their educational records.

A Freedom of Information act, he added, is what will compel the release of such records.

We had a similar experience with foreign universities. When we conducted a fact-check on the educational background of Senator Ferdinand “Bongbong” Marcos Jr, we were told by Oxford University and the Wharton Business School that their alumni records were private. We thus checked records that were publicly available and sought the help of alumni.

The Senate ethics committee does not probe into ethical violations – such as making false claims – unless someone files a complaint.

But in the executive department, the penalty for lying in one’s personal data sheet is severe.

A former Philippine consul general in Osaka was dismissed from government service and sentenced to two years in prison for giving false information about her educational attainment. She falsely claimed to have obtained an AB Broadcast Communications degree from what was then called Maryknoll College (now Miriam College) and the University of the Philippines (UP). – Rappler.com