Oct 23, 2015 6:42 PM PHT
Chay F. Hofileña
Facebook Twitter Copy URL
Copied
Lowell Menorca says in a video that he was illegally detained at the Iglesia ni Cristo central compound from July 25 to October 21, and that everything he said in a Net-25 interview was scripted 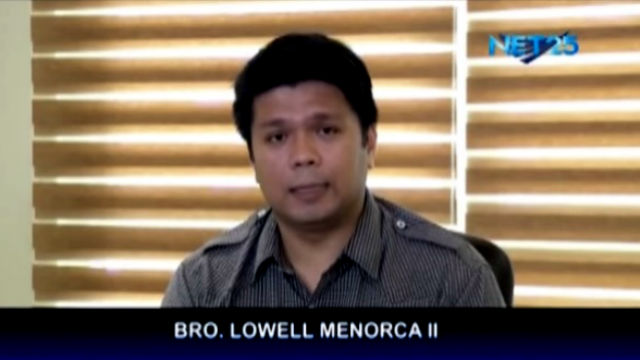 Lawyer Trixie Angeles posted on her Facebook page that Menorca and his family have been rescued. She and another source from the Iglesia confirmed this in a text message to Rappler Friday afternoon, October 23. They did not provide any details.

After several months, Lowell Menorca and his family have been rescued. The case for the issuance of the writ of amparo before the Supreme Court en banc, will proceed.

In a video obtained by Rappler, Menorca said in Filipino that they did not request the Iglesia leadership to provide them housing in the premises of the INC Central compound or to keep under protective custody.

(The reason they did that is because they used the opportunity to take me out of prison and put me in a controlled environment where they could visit me anytime, talk to me, interrogate me and extract information they want from me about the blogs of “Antonio Ebangelista.”)

The blogs attributed to Ebangelista, believed to be a pen name, have been extremely critical of the Iglesia leadership and have exposed abuses and excesses.

Menorca was previously arrested in Dasmariñas, Cavite, for alleged illegal possession of an explosive, which was supposedly a hand grenade he used to threaten two construction workers. He was however released on July 26 after the complaint was withdrawn. His whereabouts immediately after that had remained unknown.

While illegally detained, Menorca and members of his household were prohibited from leaving the compound or going where they wanted to go. They were also prohibited from accepting other visitors and had to seek approval from the INC leadership to accept them.

In the video, Menorca explained why he refuted earlier claims by his brother Anthony that he was abducted. According to him, everything he said in an interview aired on the Iglesia-owned Net 25, was “scripted.”

“Lahat ng narinig ninyo at sa iba pang interview, lahat po ‘yun ay scripted.” (Everything that you heard and all that was said in other interviews, all of those were scripted.)

He added that he followed what he was told to do because he feared for his and his household’s safety.

Two days later, the High Court directed Iglesia respondents named in the petition to produce Menorca and 3 others before the Court of Appeals on November 3. The 3 included Jinky Otsuka-Menorca, Yurie Keiko Otsuka, and Abegail Yanson.

As of posting, Rappler had not received responses from Zabala, who was asked about Menorca’s allegations.

Earlier, expelled INC minister Isaias Samson Jr filed an illegal detention case against INC leaders before the justice department. A serious illegal detention charge carries with it a penalty of life imprisonment and is a non-bailable offense.

In the video, Menorca also said he hoped that truth would have some space in the entire process and that other members of the Iglesia would stand by truth itself.

(There is nothing to fear especially if what we say is true. I hope brethren, we will help each other, let us pray to the Lord God that he will help in the cleaning up that is ongoing in the Iglesia, for the sake of peace and safety of all our brethren.)

He also said that, after speaking up, he is aware that he would be expelled from the Iglesia, something that is hurtful, but also something they are ready to accept for the sake of the truth.