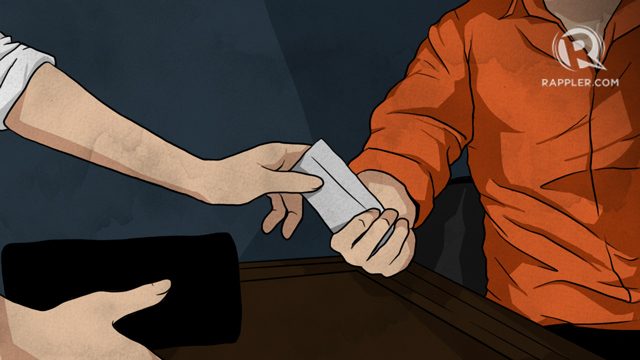 MANILA, Philippines – It all started with a woman known as “Myra”, a fixer who connected parties together for paid annulments.

In 2002, Myra linked Wilmer Salazar to Susan Limeta. Myra knew Salazar was looking for a lawyer to file for nullity of his marriage.

Limeta was a legal researcher in an Imus Regional Trial Court (RTC) under Judge Lucenito Tagle. Through the referral made by Myra, an agreement between Salazar and Limeta was made.

For P130,000, Limeta would arrange for her lawyer-uncle to handle his case and he would get a decision within 3 months. A 50% downpayment was made and the case was set in motion – or so Salazar thought.

When 3 months passed and nothing happened, Salazar confronted Tagle directly. Tagle ordered that Salazar and Limeta settle the matter in his chambers.

Limeta denied guaranteeing Salazar an annulment; the payment she accepted was for lawyer’s fees. And she only agreed to take on the case because Salazar “cried and begged for help”.

Salazar’s annulment was decided in June 2003, 9 months after the petition was filed and 6 months later than what Limeta had promised. He demanded that part of his money be returned. Grudgingly, Limeta agreed to return the money.

Salazar filed a case of misconduct against Limeta with the Supreme Court.

“Undoubtedly, Limeta received money. Even if it were to pay for the lawyer, she should not have taken it as Salazar could have paid the lawyer directly. The fact that she had referred her uncle cast further suspicion on Limeta,” read the Court’s decision.

Judge Norberto Quisumbing, who was ordered to investigate the case, said in an interview: “Even if she referred another lawyer, another court outside of her own, it is improper. She is an officer of the court.”

The Court agreed. As written in its decision, “Although every office in the government service is a public trust, no position exacts a greater demand for moral righteousness and uprightness than the judiciary.”

Limeta was suspended for one year for gross misconduct and admonished with a “stern warning” that a similar act would be dealt with more severely. (READ the full decision here.)

In 2004, another complaint against Limeta surfaced. This one was closer to home; it was filed by her cousin who purportedly paid Limeta P35,000 as a 50% downpayment to look for a lawyer who could arrange her court documents.

The year before, Bernalette Ramos, a first cousin of Limeta, was looking for a lawyer to handle her annulment case. Her mother suggested getting Limeta’s help. Limeta asked for P70,000 to arrange for a lawyer to fix the initial documents.

Time passed and nothing happened, but word about Limeta’s services spread. Carissa Sosa, a family friend of Ramos, said that Limeta had also asked her and another friend for P70,000 to facilitate their annulment cases.

Ramos was alarmed and angered. Similar to what happened between Salazar and Limeta, another confrontation ensued in Tagle’s chambers. Ramos came prepared. She brought with her a lawyer who acted as her witness.

By this time, Tagle was not surprised by the accusations. A furious Limeta agreed to return the money. Ramos demanded that Limeta sign a promissory note but she refused. Limeta stormed out of the judge’s chambers, leaving the matter unresolved.

Ramos’ annulment case stalled, leading her to conclude that Limeta used the money for herself.

Ramos filed a complaint against Limeta with a bevy of charges: graft and corruption, gross misconduct and conduct unbecoming of a government employee.

In October 2004, the Court gave Limeta a chance to respond to the charges. In February 2006, Limeta filed a formal response denying she received money from Ramos. She countered that Ramos was out to harass and humiliate her because of a family dispute over land ownership.

The Court noted that this was not Limeta’s first offense.

Considering the testimonies of Ramos and lawyer Emily Alio-Geluz, who acted as Ramos’ witness during the confrontation, the Court ruled in November 2010 that “in the case of contradictory declarations, positive testimonies carry greater weight than mere denials.”

The Court found Limeta guilty of grave misconduct. She was dismissed from service. (READ the full decision here.)

The whereabouts of Limeta are unknown. She presumably still lives in Imus, in a barangay behind the Church, court employees informed us. We paid a visit to the barangay hall and asked barangay secretary Ed Malutong for any residency records of Limeta. A search of the barangay residents’ logbook showed no such name.

Other employees of the RTC remember Limeta as a single mom and someone who was “chatty and friendly, would engage everyone in conversation” and did not seem the type to con people.

Another case involves Rosalie Maranan who, when detained at the Imus city jail in 2009, called lawyer Renante Bihasa to come to her aid.

Maranan, a court stenographer at the Imus RTC Branch 20, had been apprehended as a result of a “sting operation”, an entrapment conducted by the Imus police. Maranan was allegedly accepting money to facilitate the annulment case of a certain Ella Bartolome.

It was close to 5 pm when Bihasa arrived at the city jail, the end of office hours. It was decided that Maranan was to be detained pending further investigation.

Bihasa returned the next day, accompanied by Judge Fernando Felicen, the presiding judge in the Imus court where Maranan worked. Felicen interceded and asked that Maranan be allowed to go home.

The entrapment was staged by the Imus police after Bartolome filed a complaint of extortion against Maranan.

By Bartolome’s account, Maranan had asked for P160,000 (driven down from an original amount of P200,000) to facilitate her annulment case. For that amount, Maranan, who flaunted her clout with the fiscal and the judge, guaranteed a decision in her favor without Bartolome having to appear in court.

The entrapment operation was documented in pictures which supposedly showed Maranan accepting money. (READ details in the court document here.)

Other court sources say that annulment cases are rife in Imus, and Maranan could not have acted alone.

Speaking on condition of anonymity, one court source said that Imus RTC Branch 20, where Felicen was presiding judge, was getting 4 to 5 annulment cases filed by lawyers Bihasa and Samson Villanueva every week.

“It was like an industry,” said our court source.

Villanueva, on other other hand, denied there were voluminous annulment cases filed in Felicen’s court. He admitted knowing Maranan, though.

At the Imus RTC, there are no records of a criminal case filed by Bartolome against Maranan. Bartolome may not have pursued legal action against Maranan, but she did file a complaint with the Supreme Court Office of the Court Administrator (OCA) in December 2009, one month after Maranan was detained.

As evidence, Bartolome submitted transcriptions of SMS messages she exchanged with Maranan, a VCD with pictures of the entrapment operation and an electronic file of the psychiatric evaluation that she was asked by Maranan to fill up.

Maranan denied the allegations, calling them baseless harassment, claiming that Bartolome was a fictitious name.

The Court conducted its own investigation and concluded that Maranan’s claim was “preposterous”. The Court found Maranan guilty of grave misconduct and dismissed her from the service in 2014.

Maranan was known to have envelopes of cash sent to Felicen.

In an interview, Felicen denied any knowledge of Maranan’s activities, but admitted that he went to the precinct when Maranan was detained. “When I learned she was detained, I went there to assist her, to verify what happened. It’s only normal for a superior to assist a subordinate. It should not be misunderstood as intervening…”

We showed him the Court’s decision to dismiss Maranan which contained details of the SMS exchange between Maranan and Bartolome.

In particular, we pointed out messages where Maranan stated, “Kakausapin ko muna si Judge kung tatanggap pa kami.” (I will talk to Judge first if we can still accept your case.”) (READ the court document with SMS details here.)

“That does not say my name. That is not me,” said Felicen. He inferred that Maranan may have referred a lawyer, and even if she was “moonlighting” and getting a commission for doing so, there was nothing wrong with that.

Felicen declined to comment on the reputation of Imus courts as “friendly”, where annulment decisions could be negotiated and bought.

“We are not soliciting cases for annulment. They are filed and raffled to us. We decide on the case according to its merits,” he said.

One court officer said there was nothing wrong with judges receiving gifts or token cash as “tips for services rendered.” This is what happened in the case of Tonette (not her real name) who, when she decided to file for annulment, did not think anything of it when her lawyer asked her to allocate a budget for the judge’s “professional fee”.

Tonette had been separated from her husband for years. He was already living in another country and she had barely spoken to him. It was a marriage that existed only on paper and Tonette wanted formal papers to end it.

Her lawyer, a family friend, took on her case and filed it in Imus, Cavite under Judge Cesar Mangrobang, whom he said, was an old law-school buddy.

Tonette paid her lawyer a total of P450,000 of which P100,000 allegedly went to Mangrobang. Her lawyer delivered on his promise: she only had to appear in court once and got her annulment in 6 months.

Mangrobang could not be reached for comment. As of this writing, we were able to confirm he is confined in a hospital due to a lingering illness.

But professional fees, common or not, are still wrong. (For estimates of legitimate fees, READ: Breaking up is hard to do…and expensive too)

In 2012, the Court considered the result of an audit and physical inventory of cases involving annulment and other similar family cases as an administrative complaint against the judges of RTC branches 20, 21 and 22 in Imus and branch 90 of Dasmariñas: Cesar Mangrobang, Fernando Felicen, ironically Norberto Quisumbing himself, and Perla Cabrera-Faller.

Members of their courts were also included in the complaint.

Felicen availed himself of early retirement in 2014, while Mangrobang was confined in a hospital. Quisumbing and Faller continue to hold court in Imus.

The case is still pending. – Rappler.com

(LISTEN: Outsourcing your heartbreak. Some people would kill to get out of a bad marriage or hire a hit man to do it. Listen to the interview or READ: End a miserable marriage? Hire a hit man?)