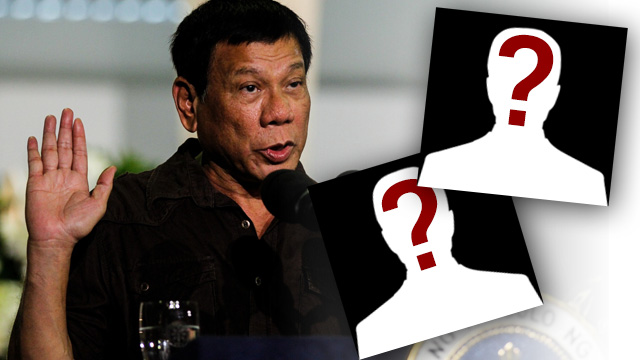 But after careful checking and verification from various sources, it appears that the list of over 150 people from the judiciary, police, and local government contains some errors. (READ: The Duterte list: Judges, mayors, police officials linked to drugs)

Some of the names are misspelled or have incomplete details – putting at risk people who share their surnames. Some information also seems to be either outdated or incorrect.

Such is the case of a certain “ex-mayor Benahar Tulawie of Talipao, Sulu.”

The name of the ex-mayor in the official transcript sent by Malacañang is different from the name that appears on various documents online.

For example, the ex-mayor’s name was spelled as “Benhajar Tulawie” both in an election monitor newsletter of the National Citizens’ Movement for Free Elections (Namfrel) in 2011 and a resolution released by the regional assembly of the Autonomous Region in Muslim Mindanao (ARMM) in 2013.

A source close to Tulawie said that “Benhajar Tulawie” died in 2014.

A social media post by the Sulu Provincial Women Council in 2014 extending condolences to his family affirmed this information.

Never been a legislator

Also included in the list, based on the official transcript of Malacañang, is a certain “Congressman Partylist Jeffrey Celis, Panay Chapter.”

However, there is no “Jeffrey Celis” in the official roster of the House of Representatives found on its website, even in previous years.

Duterte, however, may be referring to “Jeffrey Celiz”, former spokesperson of Iloilo City Mayor Jed Patrick Mabilog, who was himself also part of the list. Iloilo City, according to Duterte, is the most “shabulized” province in the Philippines. He coined the term to mean it has been heavily infected with shabu users.

Celiz was also never a legislator but served as chairman and spokesperson of the Bagong Alyansang Makabayan (Bayan) in Panay, according to a 2004 Newsbreak piece, before he worked for Mabilog.

Tulawie and Celiz are not the only ones on the list with wrong information.

Rappler double-checked the names indicated in the official transcript sent by Malacañang against other government documents and found that 14 were misspelled and 27 have inaccurate or incomplete positions and locations.

No other information on Yusofa Monder Bugong Ramin of Iligan City, Lanao del Norte is available as of posting.

Meanwhile, out of the total number of LGU officials mentioned, 31 are incumbent, elected officials.

Note: Text in bold reflects the correct spelling of the officials’ names.

Despite Duterte’s assurances that the list had been revalidated when he read the names past midnight on Sunday, August 5, the errors and incomplete information indicate the need for more thorough checking.

The President said he would take responsibility for any mistake in his list.

“Any mistake of the military and the police dito (here), ako yung tagasalo (I will take responsibility). I ordered the listing, revalidation, I am the one reading it and I am the sole person responsible for the same,” he said. – with research by Michael Bueza/Rappler.com

Do you have information to correct or add to what’s on the Duterte list? Rappler is crowdsourcing information on the individuals on Duterte’s list. Comment below or email investigative@rappler.com for confidential information. Or simply tag @rapplerdotcom on Twitter.