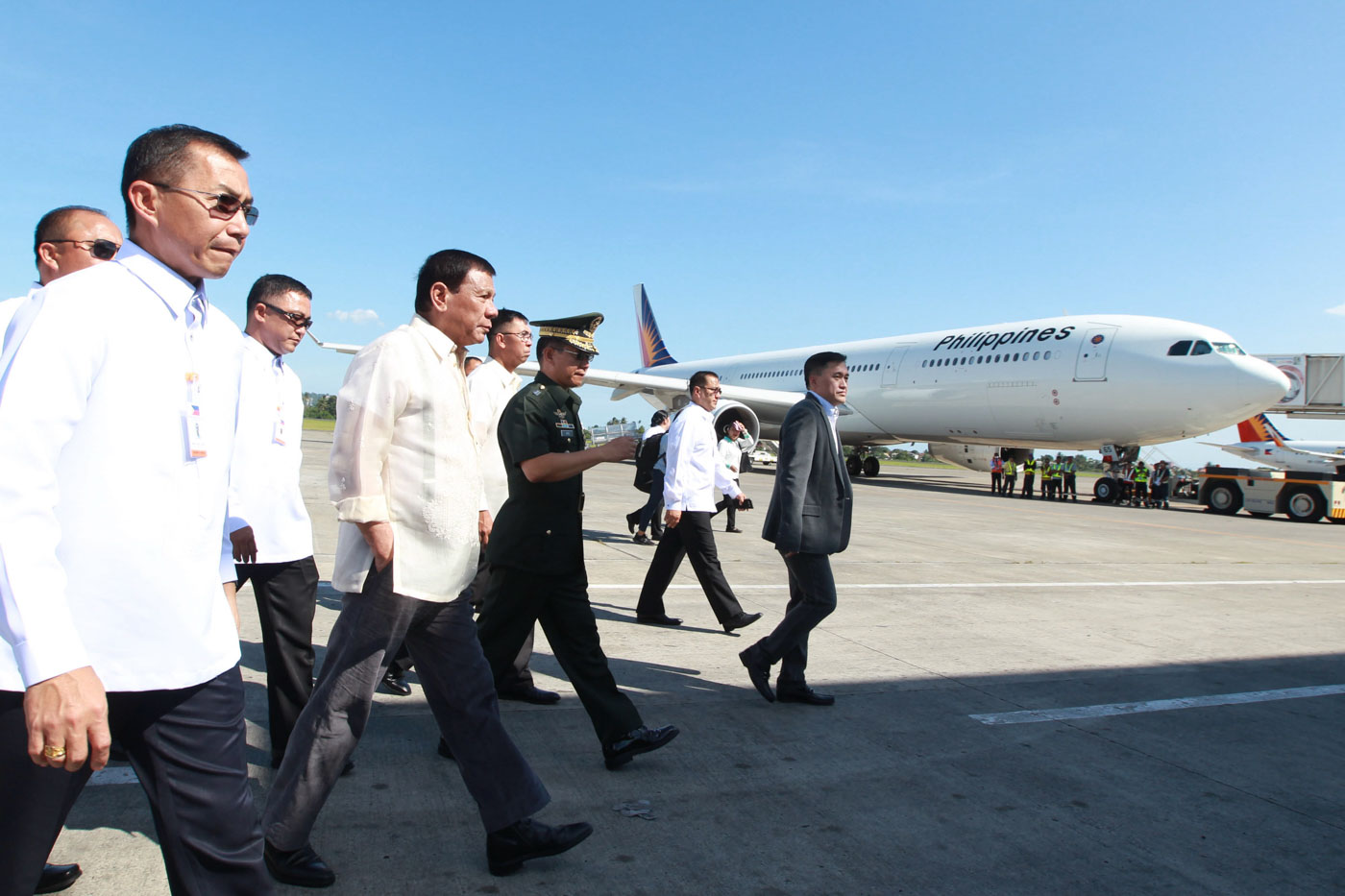 MANILA, Philippines (UPDATED) – President Rodrigo Duterte projects himself as a man of simple tastes, almost allergic to extravagance and unnecessary expenses. Yet Malacañang records show he spent about triple what his predecessors spent on foreign travels during his first year in power.

Documents obtained by Rappler through the Freedom of Information system showed the government spent P386.2 million (US$7.72 million)* on Duterte’s foreign trips, excluding the cost of his last 4 trips – to Cambodia, Hong Kong, China (second visit), and Russia. Once Rappler obtains this data, this article will be updated.

In comparison, former president Gloria Macapagal-Arroyo spent P80.6 million ($1.61 million)* on foreign travels in her first year in power, more than 4 times less what Duterte spent, given dollar-peso exchange rates then that were similar to rates today.

Former president Benigno Aquino III spent P101.5 million ($2.03 million) in his first year, according to Commission on Audit (COA) data. Factoring in the $US1 = P40 exchange rate at the time, Duterte’s expenses today are about triple that of Aquino’s.

Media reports on Aquino’s foreign travel expenses peg them at an even lower number – P75.6 million ($1.51 million) in his first year (June 2010 to June 2011). Based on this figure, the Duterte administration spent about 5 times what the Aquino administration spent. It must be remembered that $1 is now equivalent to about P50.

Aquino went on 8 foreign trips in his first year. Duterte has gone on 21 trips so far, more than double Aquino’s number. 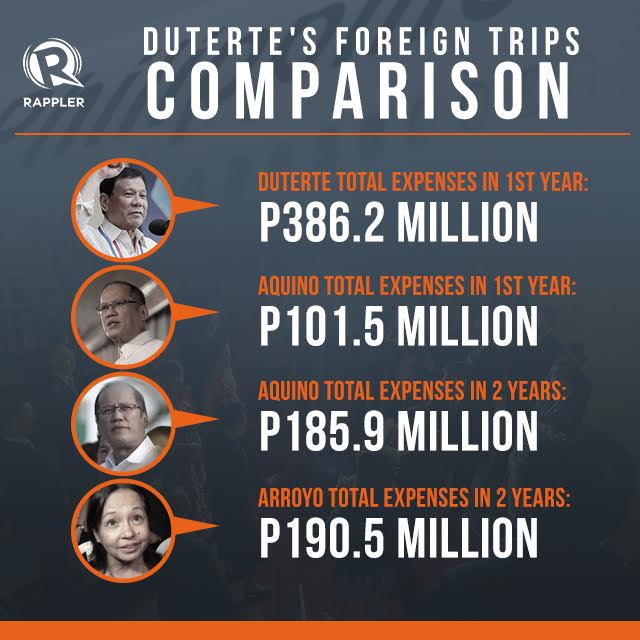 Even two years’ worth of foreign travel expenses by both Aquino and Arroyo is still half of what Duterte spent on his first year alone.

Duterte’s first year of foreign travel expenses most closely matches Arroyo’s spending in 2006 when the government shelled out P398.4 million ($7.97 million). Arroyo became notorious for her costly foreign trips, especially in the last years of her presidency.

Comparing a single Duterte foreign trip to a similar Aquino foreign trip shows that, at times, there would be large discrepancies.

For instance, when Duterte spent 3 days in Thailand in March, he spent P29.1 million. When Aquino spent two days there in May, he spent P4.5 million. Duterte and Aquino were both there on official visits.

For his 2-day Vietnam trip in September, Duterte spent P14.1 million, the same amount Aquino spent for a 5-day trip there, if the dollar-peso exchange rate today applied then.

The total cost of Duterte’s foreign trips thus far (P386.2 million) was obtained by adding the costs of 17 of his 21 trips.

In state visits, the highest-level of foreign visit, the host country pays for most of the trip.

Duterte’s visit to Peru, with a short stop in New Zealand, was the most expensive trip costing a total of P86.5 million ($1.73). The President and an official delegation of 24 people went to Lima to attend the Asia-Pacific Economic Cooperation (APEC) summit. 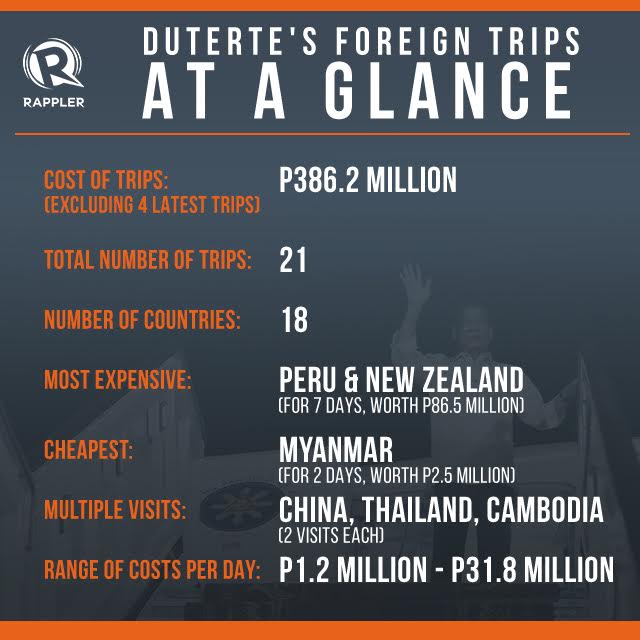 A look at the available data shows that the two biggest expenses in trips were usually airfare and representation expenses. Following closely behind were expenses for hotel rooms and “gratuities/tips.”

This was most evident in working or official visits when the host country does not shoulder most of the expenses.

Rappler’s request for a detailed list of expenses per trip was only partially granted by Malacañang. A list of expenses of only 5 trips was provided – trips to Myanmar, Thailand, Saudi Arabia, Bahrain, and Qatar. 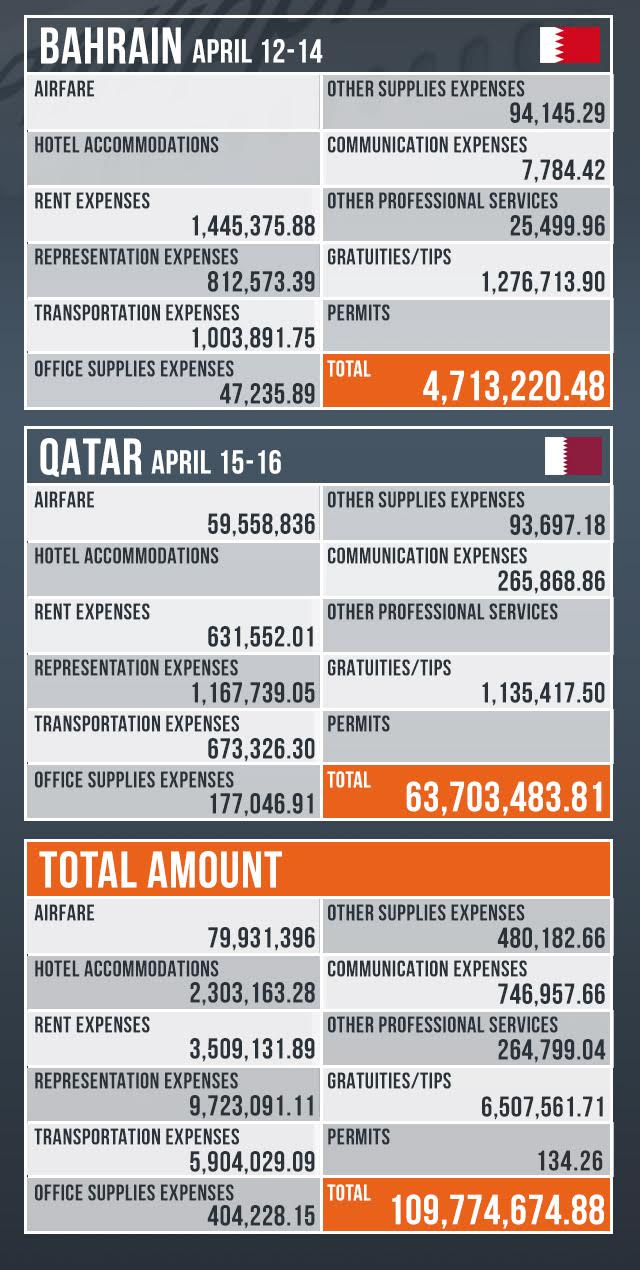 In all of Duterte’s trips, the government chartered a 370-seater Philippine Airlines plane. The cost for this is included in the list of expenses. During state visits, this is often shouldered by the host country.

The plane can accommodate all Cabinet officials, some undersecretaries and assistant secretaries, their staff, some close-in photographers, Presidential Security Group personnel, and in some cases, family members (Honeylet Avanceña, Veronica Duterte, and Sebastian Duterte were among the passengers on certain trips).

Duterte’s large delegation contributed to the unusually high costs of his trips.

This does not include their staff. If each official had 5 staff members, a conservative estimate, the party size would range from 70 to 160. This is much more than the roughly 50 persons Duterte’s predecessor Aquino brought with him.

Each delegate was entitled to representation allowance, hence the high figures of this item in the list of expenses.

Presidential Communications Secretary Martin Andanar, for instance, received P24,455.50 ($489.11) in representation allowance for the state visit to China in October, according to data from the PCOO, also requested through the FOI system. He received P25,056.50 ($501.13) for the Singapore trip in December.

The Cabinet secretary who has gone to the most number of trips is Special Assistant to the President Bong Go. Defense Secretary Delfin Lorenzana and Trade Secretary Ramon Lopez were two other faces often seen in these trips. Based on records, they were present in all but 3 trips – trips to Laos, Indonesia, and Vietnam. 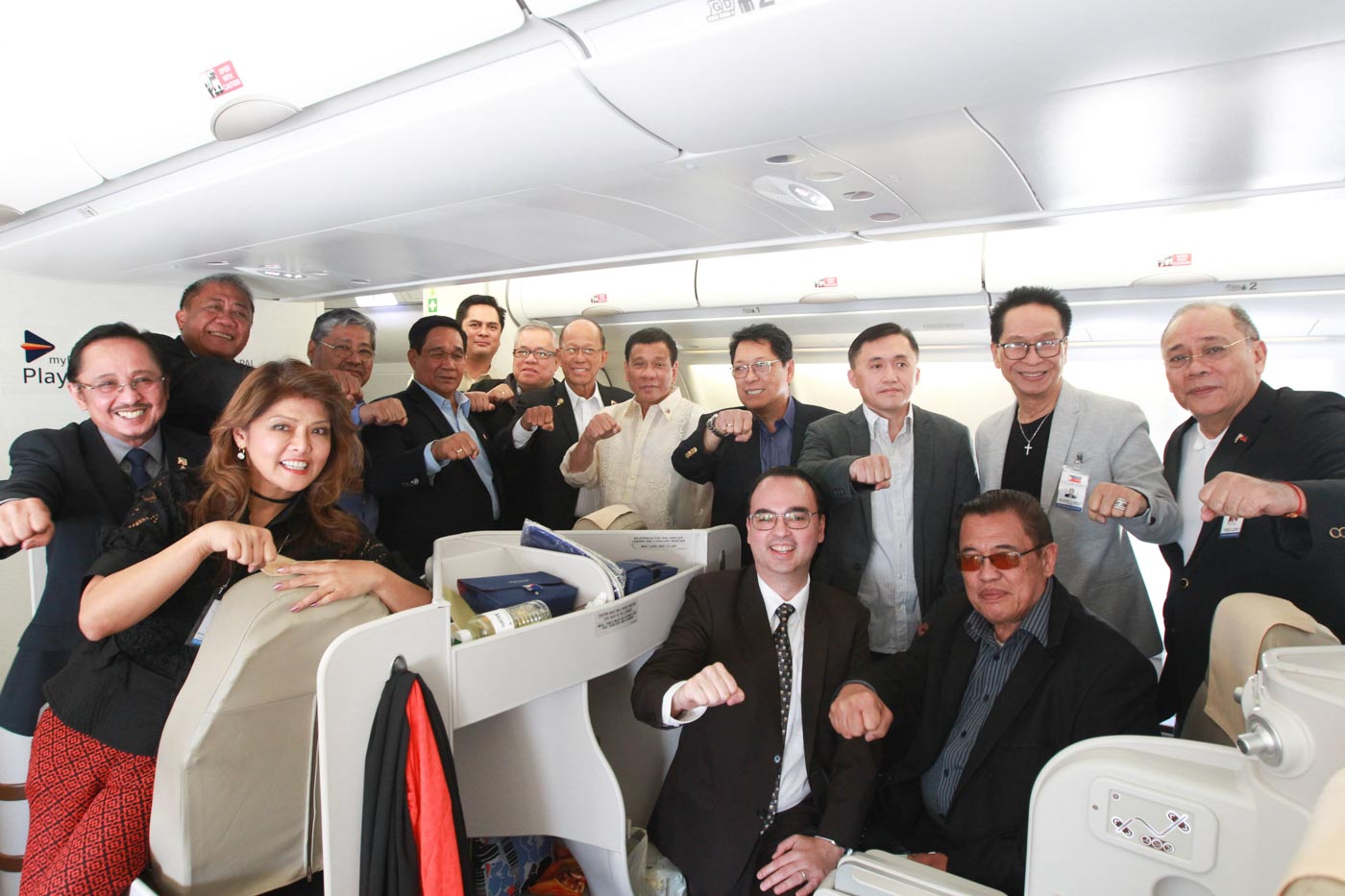 The list of official delegation members from Malacañang excludes other government officials and politicians who were seen in these trips and even introduced by Duterte as part of his delegation.

This included Alan Peter Cayetano who attended most of the trips as senator before he was appointed foreign secretary.

Ilocos Norte Governor Imee Marcos, who was part of the delegation to China and the Middle East countries, was also not on the list.

Expenses of delegation members are usually shouldered by the Philippine government and host country.

Why bring so many?

Duterte’s foreign travel expenses and his large delegation are in contrast to practices of the previous administration but quite similar to that of the Arroyo administration.

In the first few years of the Aquino administration, at least, there were efforts to save and keep the official delegation small. This was to set himself apart from his predecessor Arroyo, heavily criticized for her expensive foreign trips.

Only about 10 Cabinet secretaries joined Aquino during his travels. There was a core group of 7 Cabinet officials who were always present, according to a former Cabinet secretary.

Other secretaries were included if they had to participate in talks or sign agreements. For instance, former defense secretary Voltaire Gazmin attended the 2016 ASEAN-US Summit in California because of defense-related talks. Then environment secretary Ramon Paje joined the 2015 Paris trip to attend the United Nations climate change summit.

In Duterte’s first year, he too brought certain Cabinet members to sign deals related to their departments.

But this criteria did not apply to other delegation members. For instance, Duterte campaign contributor Dennis Uy, named Presidential Adviser on Sports, was present at the Japan and China visits. No sports deals were signed during these trips.

Duterte also typically brings a gaggle of security officials for trips with defense-related talks or deal-signing, but there is no explanation why so many were needed.

In Singapore, he had with him Lorenzana, National Security Adviser Hermogenes Esperon Jr, Año, Miranda, and Presidential Adviser for Military Affairs Arthur Tabaquero. In Russia, tagging along with him were Lorenzana, Esperon, Año, Dela Rosa, and other senior police officials.

Duterte, who is so fussy about staging grand events and prefers simple ceremonies to large ones, seems to have no aversion to spending a lot on his travels.

Aquino, who had an aversion to long-haul fights, took early-morning commercial flights since these were often cheaper. Duterte, because of his tendency to start his official activities after lunch, almost always took his international flights in the afternoon or late afternoon, when airports tend to be busiest.

There is is no apparent effort from Duterte to draw clear lines on who should be part of his delegation to limit its size.

In contrast, Aquino and Arroyo kept the number of participating Cabinet officials to 10. However, Arroyo brought a large contingent of lawmakers whose expenses were also shouldered by government. Aquino, according to a former Cabinet member, sought to keep a 50-person limit for his party (officials plus staff).

A GMA Online report shows that his party size would occasionally go above the limit by one to 5 persons.

Another difference between the Duterte and Aquino administrations was their level of transparency when it came to foreign travel expenses.

Aquino, to prove he was nothing like Arroyo, allowed expenses to be made public before and after the trips. The total cost of his travels would be announced during Palace press conferences and media interviews, even before the start of the trip.

For Duterte’s travels, however, only the cost of the first 12 trips (P277 million or about $5.54 million) was announced in public. Rappler’s request for the costs of trips after these first 12 were made through the Freedom of Information system implemented by the government to fulfill Duterte’s FOI executive order.

It took around two months for the information to be sent to Rappler, from the day the letter to the Presidential Management Staff was sent on April 21, to the day the documents could be picked up on June 9.

The Palace had previously justified the cost of Duterte’s trips by listing the agreements signed and worth of business deals and aid packages they clinched.

These deals come in various levels of commitment. Some are actual agreements, others only Memoranda of Understanding, or Letters of Intent.

Duterte’s exorbitant spending contradicts his projected image of a thrifty and practical president.

To bolster this image, he has expressed aversion to grand public events, which is why he had his oath-taking in Malacañang.

In the name of resourcefulness and practicality, he has also promised to convert the presidential plane to an air ambulance for soldiers and sell the presidential yacht to get funds for the improvement of military hospitals. Thus far, nothing new has been announced in relation to these promises.

If anything, his large delegation is a demonstration of another Duterte characteristic: his penchant for going over the top to prove a point or send a message. In this case, the message appears to be his government’s commitment to ensuring the deals signed with other countries are implemented.

Time will tell if Duterte’s foreign trips in his first year will be worth their hefty price tags. – Rappler.com