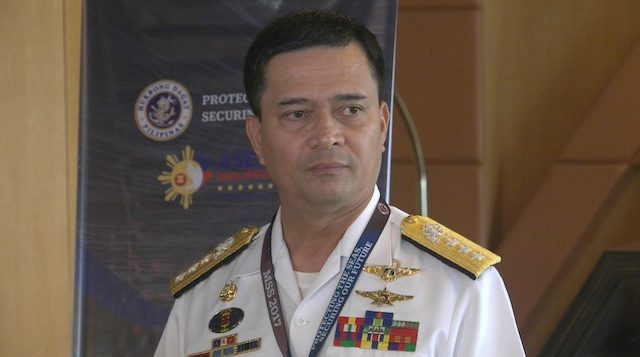 “The remarks, if permitted, are akin to a buyer (the Navy and the defense department) with his or her own money being told by the seller (Hyundai) what to buy,” Mercado wrote in a letter dated January 4, 2017.

For P15.5 billion, Hyundai will build two warships and install in them critical systems (identified by the Navy in the contract), which the South Korean company will buy itself from other suppliers.

Hyundai claimed “sole right” to choose the maker of these systems and said it may “consider” the preferences of the Navy only if they are “commercially competitive.”

This is the crux of the problem in the frigate deal that caused the unceremonious relief of Mercado before the end of 2017, and triggered another new year controversy involving Special Assistant to the President Christopher “Bong” Go. Aside from Go, Malacañang, Lorenzana, and Mercado denied any intervention.

At the center of the controversy is the Combat Management System (CMS), which is considered the heart of warships. It is a computer system that integrates real-time data from the ship’s sensors and data from other parties or other navies necessary to provide situational awareness at sea.

Hyundai decided to buy the CMS from fellow South Korean company Hanwha Systems. The Navy rejected the choice on the ground that its CMS does not comply with the technical specifications agreed upon in the contract. The project stalled.

On January 12, 2017, or a week after he received Mercado’s letter, Lorenzana was handed in Malacañang a white paper that debunked the Navy’s reasons for opposing Hanwha and trashed the supplier the Navy preferred, Tacticos Thales of The Netherlands.

Lorenzana sent the white paper to Mercado with a marginal note saying it came from Go, and that he should prepare a rebuttal for President Rodrigo Duterte. (READ: Bong Go intervenes in P15.5-B project to acquire PH warships)

A year later, after Go’s alleged intervention in the project was reported, Lorenzana admitted it was his handwriting on the note pad, but he said he had wrongfully assumed the white paper came from Go. In an interview with reporters on Wednesday, January 17, he said he could not recall who gave him the white paper, but it came from someone in Malacañang.

Mercado also said Go never approached him personally to intervene in the project. “Secretary Bong Go has not personally inquired nor talked about the frigate project to me in all instances we were together,” Mercado told Rappler.

It was Rear Admiral Robert Empedrad, the project officer back then, who was invited on January 20, 2017 to Malacañang to discuss the CMS selection. It was also Empedrad who sent on January 23, 2017 a written report to Duterte and Go.

“It’s a usual course of action done by our office if there are complaints,” Lao told Rappler on January 18.

Empedrad, who served as OIC chief after Mercado’s relief, was officially appointed to the post on Thursday, January 18, amid the controversy.

The Philippine archipelago – the South China Sea on one side and the Pacific Ocean on the other – has one of the longest coastlines in the world. But its Navy is one of the weakest.

The country’s current flagship is a hand-me-down former US Coast Guard cutter – the BRP Gregorio del Pilar – which was donated by the country’s treaty ally at a time when China resumed its aggression in the West Philippine Sea.

But Del Pilar shouldn’t be the flagship for long. The warships from Hyundai were envisioned to become the Philippine Navy’s modern and most capable warships.

In his report to Duterte and Go in response to the white paper, Empedrad enumerated the following reasons why the Navy chose Tacticos Thales over Hanwha Systems:

Even Lorenzana acknowledged that Tacticos Thales “is a proven technology.”

“But I do not know if it is far superior than what Hyundai is thinking of putting in,” he added.

There are a lot of legal technicalities in the letters exchanged in 2017 by the Navy and the defense department. Their debates went on for the entire year. The Marawi siege came and went but the issue could not be resolved even after Lorenzana issued directives ordering the Navy to honor Hanwha as Hyundai’s choice.

Installing the CMS of Tacticos Thales will cost Hyundai more. But fine print or not, sources in the Navy maintained Hanwha doesn’t comply with the technical specifications in the contract.

For one, the sources said Hanwha cannot claim to have a proven design, as the contract demands, if it is not currently compatible with TDL 16. Hanwha has committed to have the capability only by 2019.

The DND team in charge of the frigates deal accused Mercado of disregarding directives to complete paperwork necessary to give HHI the go-signal to begin construction of the ships. It was stuck at the Critical Design Review (CDR) stage, where the Navy and Hyundai were supposed to agree on the makers of the systems to be installed in the ships.

Completing the CDR would pave the way for the shipbuilder to buy steel for the ceremonial steel cutting, which officially kicks off the construction of the ships.

Lorenzana said the problem is that the Navy approved both suppliers – Hanwha and Tacticos – during the post qualification stage before he signed the contract with Hyundai in October 2016. He said he was assured it was ready for signing.

“The Combat Management System is very important to that project. But you cannot put a company there [in the contract] to put the CMS. Ilagay mo lang ‘yung capability na gusto mo (Just note down the capability you require). Hyundai said they will put the CMS there according to our specification and we will find that out when they deliver that,” Lorenzana said on December 20, 2017.

This is where the issue becomes murky. When the contract was being finalized, Hanwha had a joint venture with French multinational and aerospace company Thales Group. But Thales divested its 50%-stake in Hanwha Thales in the middle of 2016 just before Lorenzana signed the contract. Hanwha Thales is now Hanwha Systems.

It appears the Navy belatedly realized a potential problem with the fine print in Hyundai’s contract. The Navy wanted to add a page to the contract to clarify the issue but Hyundai supposedly refused to accept it.

This resulted in the letter that Mercado sent to Lorenzana in January 2017 – it was meant to protest the page in the contract that supposedly wasn’t signed by the Philippine Navy. He stood by his decision and, before his relief, gathered the former navy chiefs to explain the problem and get allies.

“He goes around forum shopping and he talks about rescinding the contract kung hindi matuloy ang pinapasok niya (if he doesn’t get his way). I had to recommend his relief and it was approved by the President,” said Lorenzana when he explained Mercado’s relief on December 20 last year.

“I didn’t want to remove him but the team that is involved in the acquisition of the frigates is alarmed because the project was delayed by the insistence of Admiral Mercado on the system,” said Lorenzana.

Mercado’s relief drew attention to issues that had long been discussed in social media pages.

It surprised the military as an institution and many didn’t know what to make of the corruption allegations made on both sides. Lorenzana was asked if Mercado was being investigated for corruption and he said no.

Lorenzana also had to meet with former navy chiefs who were disappointed with the unceremonious change of command.

“They said I violated the time-honored tradition of retiring honorably with a parade and everything. I told them that the situation then was so fluid and that we can no longer have a formal turnover. I explained to them why and they understood,” Lorenzana said on January 8, 2018.

In the House of Representatives on January 15, former navy officer and fierce Duterte critic Magdalo Representative Gary Alejano delivered a privilege speech urging the government to cancel the project if the winning bidder insists on giving the Navy an outmoded warship.

The Department of National Defense ignored the call but Congress is poised to investigate the issue. It’s a no-win situation for the country facing challenges in its maritime waters. It might need to wait longer to have modern warships. – Rappler.com