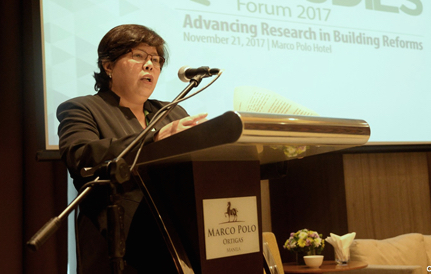 MANILA, Philippines – In just a year at the helm, the Philippine Health Insurance Corporation’s (PhilHealth’s) interim president has already spent more than half a million pesos for her regular hotel stays and travels from her Bohol home to the PhilHealth central office in Pasig and vice versa.

PhilHealth is the government’s health insurance program meant to provide affordable health care to all Filipinos.

The expense comes amid a massive net income loss of PhilHealth amounting to P8.92 billion, according to its 2017 unaudited financial statement posted online. Based on PhilHealth’s own numbers, this is 3,446.5% higher than the restated 2016 net loss of P251.5 million.

Since the start of her stint as PhilHealth OIC president on April 10, 2017, Celestina Ma. Jude de la Serna has spent at least P627,293.04 of government funds for her accommodations, flights to and from Tagbilaran, and terminal fees, according to the Commission on Audit (COA) and documents obtained by Rappler.

At present, De la Serna is also the concurrent PhilHealth board representative for Overseas Filipino Workers since being appointed on July 1, 2016.

In total, state auditors at PhilHealth have asked De la Serna to explain her receipt of allowances, wages, and per diem amounting to almost a million, broken down as follows:

De la Serna, despite being assigned to the PhilHealth central office, does not stay or rent a house in Manila. She instead stays in hotels near the office on Shaw Boulevard in Pasig City. 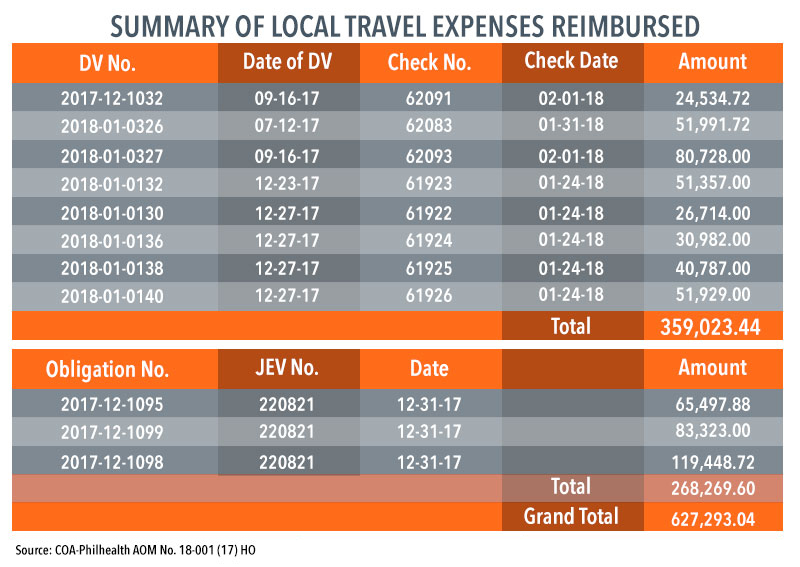 As OIC president/CEO, she belongs to Salary Grade 30, earning a monthly salary of P143,534 and receiving other allowances and benefits such as:

Rappler obtained documents showing De la Serna’s travel expenses in June, October, November, and December 2017 to and from Tagbilaran in Bohol. These expenses are, however, only partial and, as such, do not sum up to the P627,293.04 amount of travel allowances that COA is questioning.

The following week – from June 2 to June 10 – she transferred to Legend Villas in Pioneer, Mandaluyong, with her hotel bill amounting to P30,400. She checked out on June 10 and flew to Bohol, with her ticket valued at P7,091.22 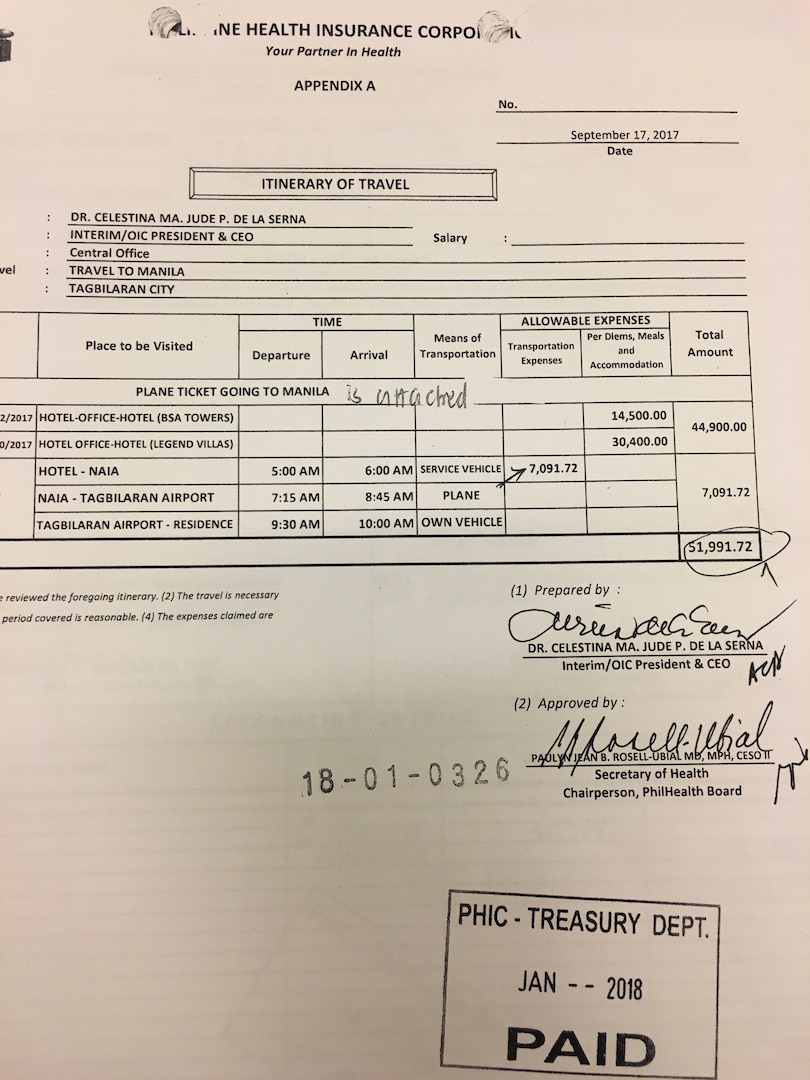 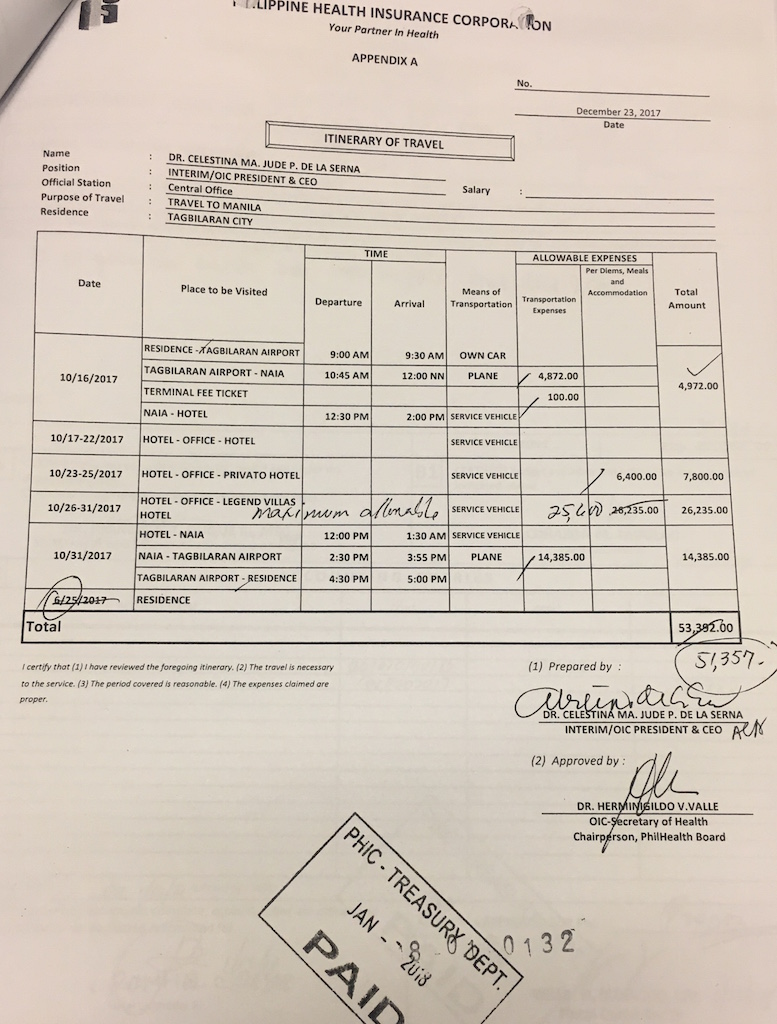 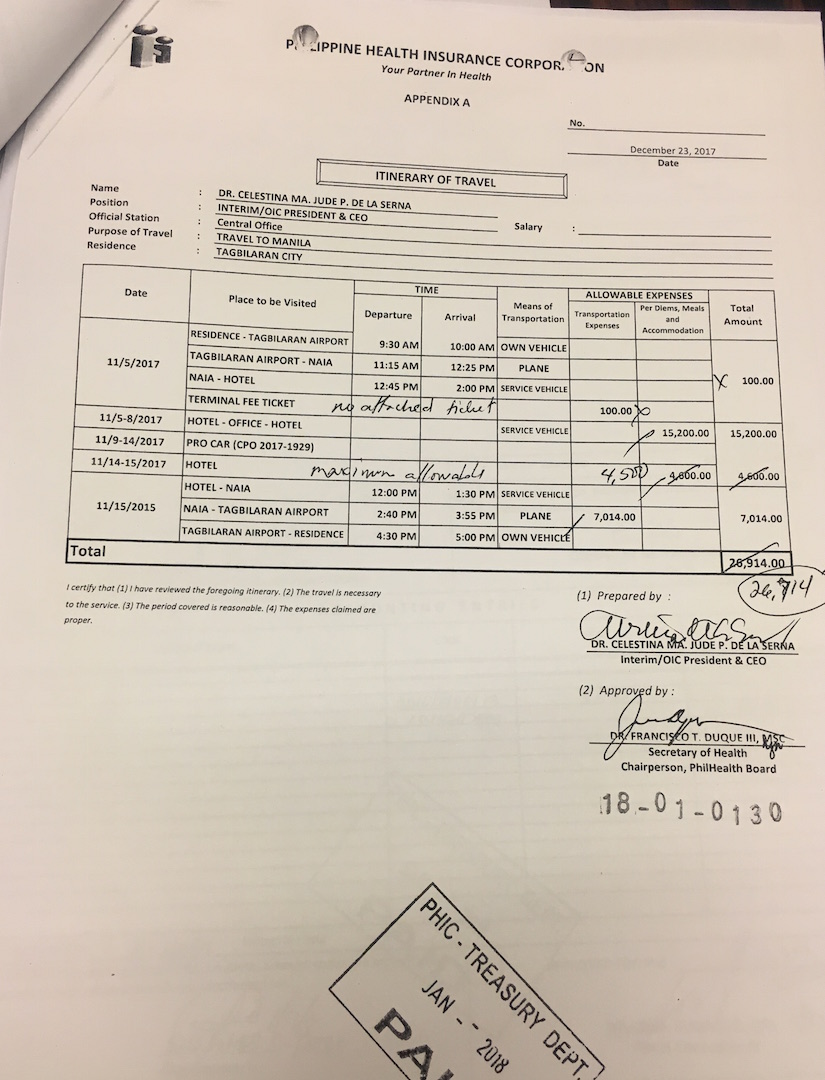 COA, in its Audit Observation Memorandum dated April 18, 2018 and addressed to De la Serna, maintained that her permanent/official station is in PhilHealth Central Office in Pasig and asked her to explain the legal basis of her travel reimbursements.

State auditors also cited the order De la Serna herself issued this year, Corporate Order 2018-0002, promoting austerity measures in the agency. The order says the agency could save by limiting travel expenses and other expenditures. It provides for the following:

But PhilHealth spokesman Israel Pargas said De la Serna is not technically based in the central office because she is only an OIC and has not been officially appointed. This, he said, puts De la Serna in a “unique position”, that’s why the Board granted her allowances.

(Remember, she still has no formal appointment, so technically she has no place of office yet. Because she is an interim president, she can be removed by the Board anytime, no one-year term required. Actually, her base is not the central office because she still doesn’t have an appointment.)

Asked by Rappler how he would reconcile the travel expenses being funded by government money, Pargas said:

“Allowed naman siya by Board reso, based on a letter from GCG (Governance Commission for GOCCs) also saying dapat binibigyan siya ng reimbursable allowances. Second…wala namang PhilHealth polisiya na you can just rent any hotel. Meron lang maximum amount.” (She’s allowed by the Board resolution, which is based on a letter from the GCG also saying she should be granted reimbursable allowances. Second, there is no PhilHealth policy that allows her to just stay at any hotel. There is a maximum amount allowed.)

If she’s allowed allowances, then why not just rent a place near the office instead?

State auditors, citing COA Circular No. 2012-003 dated October 29, 2012, alleged that the receipt of such allowances was “irregular” – an expense incurred “without adhering to established rules, regulations, procedural guidelines, policies, principles or practices that have gained recognition in laws.”

“Irregular expenditures are incurred if funds are disbursed without conforming with prescribed usages and rules of discipline…A transaction conducted in a manner that deviates or departs from, or which does not comply with standards set is deemed irregular. A transaction which fails to follow or violates appropriate rules of procedure, is likewise irregular,” auditors said.

“Public officials and employees shall always uphold the public interest over and above personal interest. All government resources and powers of their respective offices must be employed and used efficiently, effectively, honestly and economically, particularly to avoid wastage in public funds and revenues,” the law says.

Health Secretary and PhilHealth Chairman Francisco Duque, when asked by Rappler, said he signed De la Serna’s reimbursements because he just “continued” the actions of his predecessor former Health chief Paulyn Ubial, whom employees say was an ally of De la Serna inside the agency.

“Inabutan ko na ‘yan. I continued it because the President [Duterte] has not appointed a new CEO yet. Di ako masyado sa PhilHealth, policy formulation ako, and of course board action,” Duque told Rappler in a phone call on April 26.

Duque and Ruben John Basa, Executive Vice President and Chief Operating Office of PhilHealth, confirmed that there was indeed a board resolution allowing De la Serna’s use of government funds for her travel expenses. Rappler has formally requested for a copy of that but has yet to receive it.

It remains unclear if the resolution could serve as enough legal basis for what the COA referred to as “irregular” travel allowances.

“There is a PhilHealth Board Resolution which approves salaries and other allowances to the interim [president/CEO] including housing allocation and family visits. The Board based its decision on a GCG (Governance Commission for GOCCs) letter,” Basa told Rappler in a text message.

However, in a corporate order dated December 10, 2015, PhilHealth said only its officials and employees who are reassigned, “without them requesting such re-assignment and which re-assignment is strictly made in the exigency of service,” are granted a housing allowance.

De la Serna was technically not reassigned. Her appointment as board member for OFWs in 2016 is her first post in government, as shown in her curriculum vitae.

She is the daughter of former Bohol governor and Tagbilaran City mayor Victor de la Serna, President Rodrigo Duterte’s professor at the San Beda Law School, also now a member of the Consultative Committee on amending the 1987 Constitution.

She graduated from the De La Salle University College of Medicine in 1989. She then worked as a trainee in family medicine at the Ospital ng Maynila, and became a resident physician for Healthway Medical Clinic in Alabang from 1999-2002.

As a doctor, she had a private clinic in Bohol from 2002-2003, and was chief of two small hospitals in the province: 15-bed Maribojoc Community Hospital from 2003 to 2005 and 25-bed Congressman Natalio P Castillo Sr Memorial Hospital in 2005.

Rappler repeatedly tried to get the side of De la Serna but was told on Wednesday she could not yet give an official statement.

Per diem during virtual meetings

COA also asked De la Serna to explain the per diem she received, a total of P152,000, from board and committee meetings done via tele/video conferencing. While such method is allowed, COA said she did not submit complete documents.

COA noted that De la Serna was on sick leave from August 14 to October 26. Yet the data shows that she attended meetings via video conference while in the hospital and got paid for them.

In the regular board meetings on August 29 and September 14, there was no Notice of Meeting and agenda attached.

COA said it was the same thing for the committee hearings and added there was missing confirmation from De la Serna that she completely and clearly heard the meeting during the video conference, as required by government rules.

COA also noted that Eden Torilla, the clerk of the Office of the Corporate Secretary, received the checks for De la Serna even without an authorization letter.

(That was allowed by the Board. Actually about the sick leave…let’s say I went on sick leave, I filed but technically I already went to work on one of the days covered, the sick leave would now be invalidated. It is incumbent upon those who filed, even if I filed for absence, if I go to work, that means it’s no longer a sick leave.)

“Remember, dalawang hat wine-wear ng president: as board member and as president. So during that time, as president di siya present dito pero as board member, she was able to attend the board meeting at certified yun by corporate secretary,” he added.

Aside from this, state auditors questioned why De la Serna received allowances, which were already disallowed by COA in previous years.

These include hazard pay, which is allowed in the Magna Carta for Public Health Workers, subsistence allowance, laundry allowance, collective negotiating agreement, and PS We Care, amounting to a total of P143,881.17.

State auditors gave De la Serna 10 days from receipt of the memo to comment. As of May 2, she has not yet responded.

PhilHealth referred the memo to the internal legal department, as it considers requesting a possible deadline extenstion. – Rappler.com