MANILA, Philippines (UPDATED) – Philippine National Railways (PNR) General Manager Junn Magno faces a corruption complaint initiated by PNR employees. They blame him for dispensing with the system of checks and balances in the agency.

State auditors, as Rappler earlier reported, flagged PNR’s “illegal use” of P50.9 million in railway funds for the payment of PNR security services incurred in 2017. The issue is just one indicator of a bigger organizational problem in PNR.

PNR employees accused Magno of wanting to control PNR after he designated a single person, PNR chief corporate lawyer Celeste Lauta, to various “incompatible” and “critical” posts in the agency. She has been a PNR official since 2014.

In November 2018, the Bagong Kapisanan ng Manggagawa sa PNR (BKMP) filed a case against Magno before the Presidential Anti-Corruption Commission (PACC) for supposed “serious dishonesty, grave misconduct, conduct prejudicial to the interest of the service, gross neglect of duty, and perjury.”

Around that time, PNR employees held regular lunchbreak protests outside the PNR headquarters in Tutuban.

“GM Magno, in order to control all transactions in PNR for him to smoothly execute his personal desires and plans in the PNR, he issued Office Orders designating Atty Lauta on critical, incompatible, and conflicting assignments in PNR where checks and balances and transparency are dispensed with and vital and key corporate responsibilities are concentrated [on] GM Magno and Atty Lauta,” said Edgar Bilayon, president of BKMP, in a complaint before the PACC.

An officer who requested anonymity told Rappler there exists no checks and balances in the agency known to have been plagued by mismanagement issues even in the past.

(She is part of the bidding, then the BAC [the Bids and Awards Committee which reviews bid documents] secretariat was placed under her legal division. It’s the legal division that also checks contracts, which are decided on by the board [where she is also corporate secretary].)

Another official told Rappler: “He uses her to control the agency. These divisions were made so there would be no monopoly of one person in government agencies.”

President Rodrigo Duterte appointed Magno as PNR chief on May 3, 2017. At the time of his entry, there was a pending issue against Lauta.

She was facing an administrative complaint for not heeding the Supreme Court’s one-month suspension order against her and for supposedly not informing PNR about it. In short, she continued working as a lawyer in PNR despite the suspension.

State auditors also questioned why she received bonuses, honoraria, and salaries despite her suspension. After months and lengthy discussions, she returned the money.

On November 22, the panel ruled that Lauta committed gross misconduct and serious dishonesty and recommended her dismissal. Three of the 5 members signed the decision: chairman Silva, Cudalap, and Geronimo, who indicated beside her signature that dismissal was too much. She instead proposed a one-year suspension without pay.

Magno did not act on this recommendation, infuriating employees.

In his reply to the PACC complaint, Magno said the results of the special investigating panel were mere recommendations. After all, rules state that the board has to agree before disciplining or suspending an employee.

Unlimited posts for only one person? 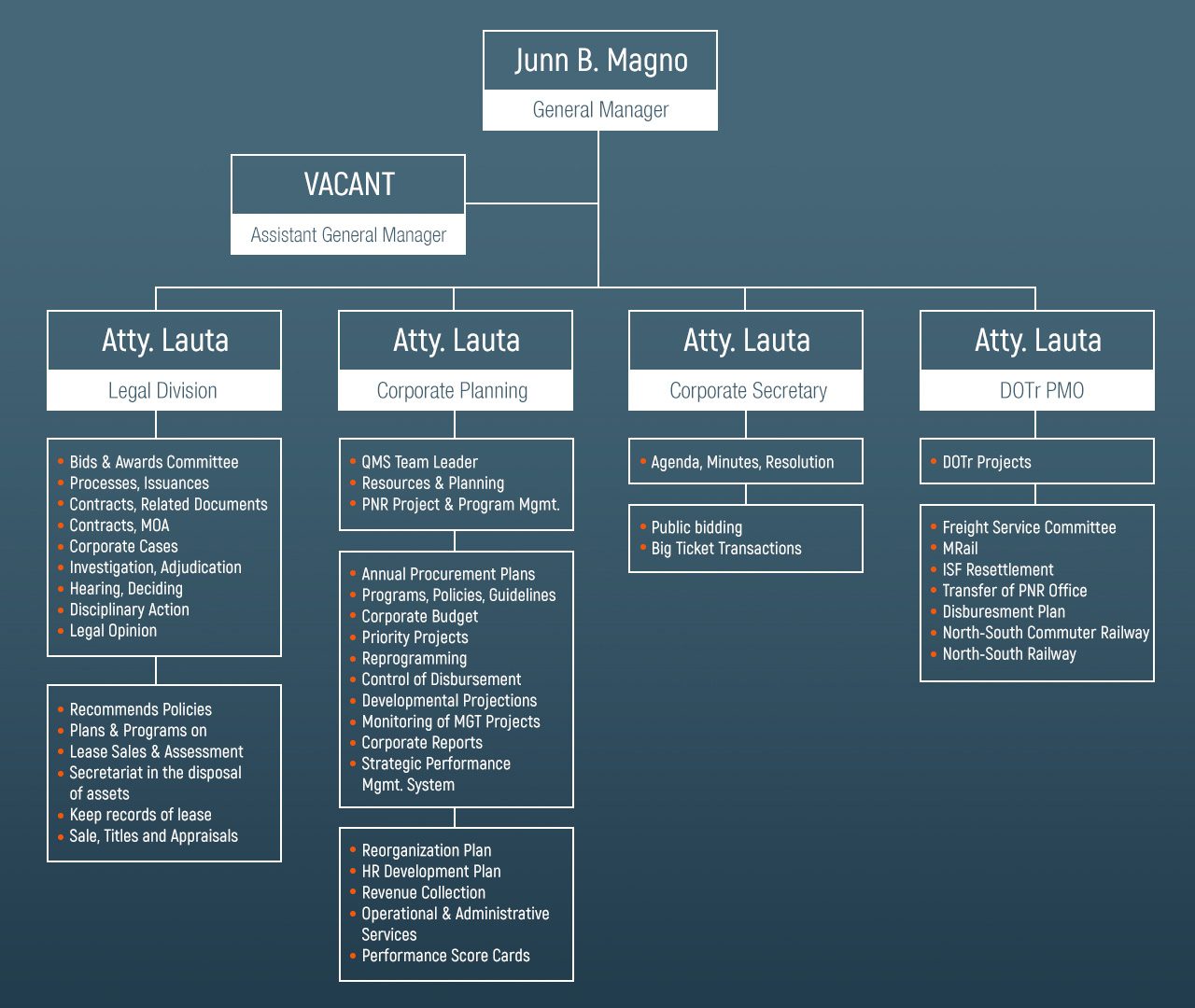 What added fuel to the fire was the designation of Lauta to critical posts starting July 2017, even when the special panel was still investigating the issues against her. The so-called “unlimited” assignments of Lauta continued even after the committee’s decision.

Rappler repeatedly sought the side of Magno and Lauta on this issue to no avail. The story will be updated with their responses once they reply.

On July 24, 2017, Magno issued Office Order No. 41 creating a new resource planning committee, to be headed by Lauta, under the existing corporate planning division. The committee is responsible for “organizing and planning the acquisition, disposition, and maintenance of all resources, including capital spares, fuel, and lubricants,” among others. Unlike in the past, 3 insiders said that the administration and finance department now has to wait for Lauta’s go-signal before checks and payments could be released.

“Atty Lauta was assisted by 5 newly-hired job order personnel. She had the overall control, the means, and the methods to accomplish the works or acomplishment of the committee with respect to the acquisition and allocation of PNR resoures,” Bilayon said.

On the same day, Magno issued Office Order No. 42, also designating Lauta as the acting division manager of the corporate planning division, which supervises the new Lauta-chaired resource planning committee, which he also created.

This division, according to the PNR website, prepares long-range and annual plans, as well as guidelines and policies for the preparation of the budget. It also controls disbursement of rehabilitation funds.

A year after, on July 23, 2018, the powers of the division were even expanded through Office Order No. 70. The office order assigned the corporate planning division to “handle PNR’s project and program management, including but not limited” to the big-ticket North-South Commuter Railway (NSCR) and the North-South Railway Projects (NSRP).

The NSCR is the Malolos to Tutuban railway project, which costs around $2.88 billion to be funded by the Japan International Cooperation Agency through official development assistance loans. The NSRP cost around $5.4 billion to be financed through Chinese ODA.

On August 1, 2017, Magno, through Office Order No. 47, created a committee for the multibillion NSCR project and again designated Lauta as the chairman tasked to handle right of way, resettlement, and utilities diversion.

On October 24, he appointed her officer-in-charge of the legal division, which handles all legal cases of PNR and reviews all contracts or documents to which PNR is a party, among others.

On November 20, Magno appointed Lauta as the quality management system leader for the ISO 9001:2015 certification.

On March 27, 2018, he appointed her chairperson of the PNR freight service committee, which was made to report directly to Magno’s office.

On June 13, Magno transferred the bids and awards committee (BAC) secretariat to the legal division, headed by Lauta, for “proper coordination and management.”

Employees said Lauta now has control of the BAC documents, including BAC processes, reports, contracts, and other related documents.

“The promotion of good governance in adhering to the principles of transparency, accountability, equity, and efficiency in PRC procurement process is thereby compromised,” Bilayon said.

On January 13, 2019, Magno issued Office Order No. 5, after a board resolution, changing the membership of the bids and awards committees. Lauta was designated vice chairman of BAC 2, which would handle “goods and consultancy and such other projects” for the North South Railway Project, which she also supervises as head of project management.

On top of all these, Lauta was assigned as the point person in PNR for the PACC, which is hearing the case against Magno. To see how crucial Lauta’s posts are and how they signify conflicts of interest, consider this. The corporate planning division, which she chairs, proposes projects to the board for approval. As corporate secretary, she prepares board resolutions, takes minutes of the meeting, and attests to the accuracy of records, including board decisions.

The division then prepares the terms of reference or specifications of the project. This is usually reviewed by the legal division, which Lauta also chairs, to make sure that the agency is protected. Once approved, the BAC publishes invitations to bid, followed by a pre-bid conference. Here, according to PNR sources, the project and program management headed by Lauta is usually involved in clarifying details that the suppliers might ask about.

The BAC then pre-qualifies bidders in terms of technical and financial capability, references, and work history, based on submitted documents.

Due to the lack of checks and balances, employees alleged that Magno, through Lauta, could provide their preferred bidders advance information because they know the project details way before the information is posted on the Philippine Government Electronic Procurement System (Philgeps), a portal where national government and local government units (LGUs) are mandated to post their bid notices for contracts and services.

Once the bids are submitted, these are opened and evaluated. Afterwards, projects are awarded. It is again the legal division, chaired by Lauta, that checks and supervises the contracts.

Employees also cited the realignment of P50.9 million from the NSCR and NSRP funds to pay for security services. Magno and Lauta had control as Lauta herself served as the corporate planning division chief and chair of the DOTr project management panel.

In defense of questionable designations

But in Magno’s reply to the PACC complaint, he denied the allegations and said there is nothing wrong with assigning Lauta to numerous key posts.

Citing Republic Act 4156 or the law creating the PNR, Magno said he has “the duty and discretion to direct and manage the corporation, and this duty comes with the discretion of choosing employees of PNR who I know are capable of performing the job assigned to them.”

Magno also denied there was malice and bad faith in Lauta’s designations.

“When the truth is that the organizational chart of [PNR] is so understaffed and that there is not enough officials to perform all tasks,” he said.

In defending his directives, Magno said Lauta is just part of a committee or a group, and as such could not make the decisions alone.

“There is little doubt that she alone can decide or influence a group comprising of at least 5 to 6 individuals. The performance of the committee is a collective effort and to insinuate that Lauta alone can decide for PNR….Is designed to impress upon [PACC] that the PNR is involved in unscrupulous or illegal acts,” he said.

But while Magno insists on the legality of his actions, demoralized employees claim these were inappropriate and abusive.

The PACC has yet to decide on the case against Magno, a known supporter of President Rodrigo Duterte.

If you have additional information or tips to share on any story of public interest, email us at investigative@rappler.com.

Editor’s Note: In an earlier version of this story, PNR General Manager Magno was erroneously identified as the former chair of the transport group Stop and Go coalition. This has been corrected.