The justices behind the pork barrel cases

Aug 17, 2014 5:31 PM PHT
Facebook Twitter Copy URL
Copied
A member of the Sandiganbayan says the filing of the 3 plunder cases is a welcome development for those eyeing higher positions in the judiciary. 'How they decide on the cases [could] affect their chances of being appointed to the SC.' 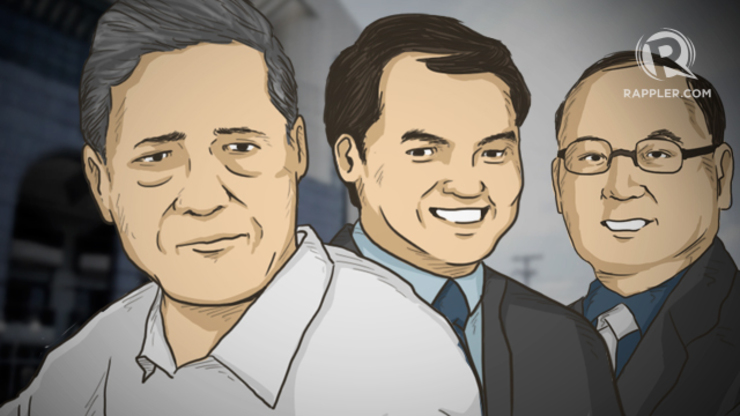 MANILA, Philippines – Who are the justices handling the pork barrel cases?

Given the public interest nature of the plunder cases filed against 3 opposition senators in connection with the misuse of their Priority Development Assistance Fund (PDAF) or pork barrel, the spotlight also focuses on the justices who will not only have to weigh the evidence, but also carry the burden of meeting public expectations.

The plunder case of deposed president Joseph Estrada provides a glimpse of how long the multimillion-peso cases will be tried. It took 6 years for a special division of the Sandiganbayan conducting marathon hearings to resolve the case.

Estrada’s plunder case was filed shortly in 2001 after Arroyo assumed office. By some stroke of luck, Arroyo was not barred from seeking the presidency in 2004 which she won under a cloud of doubt. Arroyo’s total 9 years in office allowed her the luxury of waiting for the resolution of the case and extend pardon to the former president.

Who will handle the PDAF cases?

Aquino however does not enjoy the same luxury.

With his term expiring in two years, and the trial of the cases expected to last way after he has stepped down from office, the resolution of the biggest public fund scandal in Aquino’s presidency will be carried over to the next administration.

This early, there are speculations that the plunder cases against Senators Juan Ponce Enrile, Jinggoy Estrada and Ramon ‘Bong” Revilla Jr will be for naught if a friendly and sympathetic  administration succeeds Aquino. Prior to their arrests, Estrada and Revilla were both considering running for higher posts in the 2016 national polls, while Enrile was considered a “kingmaker” of sorts.

Of the 15-person anti-graft court or Sandiganbayan, only 4 are Aquino appointees. On the other hand, his successor will have an opportunity to appoint 5 new justices between 2016 and 2022.

A member of the Sandiganbayan said that whether they admit it or not, the filing of the 3 plunder cases is a welcome development for those eyeing higher positions in the judiciary. “They have leverage with the next president. How they decide on the cases [could] affect their chances of being appointed to the SC.”

The Sandiganbayan has been a rich source of future SC justices. Justices who toe the line are amply rewarded with posts in the SC.

The plunder case of Estrada is a case in point. Two of the justices who convicted Estrada – Diosdado Peralta and Teresita De Castro – were appointed to the SC. The third justice, Francisco Villaruz, was named presiding justice of the Sandiganbayan.

How they will vote in the 3 plunder cases of the 3 opposition senators will not only determine the fate of the country, but theirs as well. 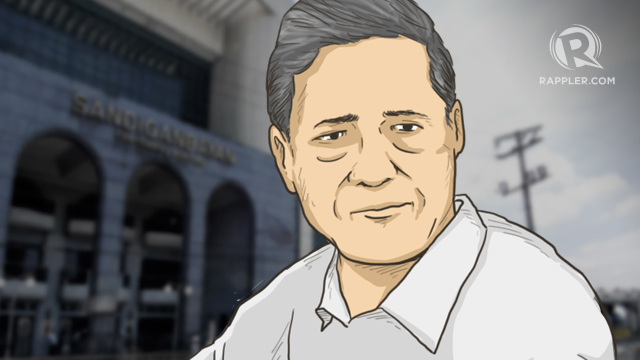 De la Cruz, an appointee of Arroyo in 2003, has been setting his eyes on the presiding justice post. He got 5 votes from the JBC, the same number of votes received by now Presiding Justice Amparo Cabotaje-Tang.

De la Cruz joined Lagos in denying the bail petition of Arroyo but they failed to secure an outright ruling when Ponferrada dissented. At the time the court deliberated on the petition, Dela Cruz was already vying for the presiding justice post.

De la Cruz claims he has no connections to back up his bid, and is known in the court as a “peacemaker.”

In 2006, De la Cruz, along with two other justices, were accused by former Makati vice mayor Roberto Brillante of accepting bribes in exchange for the dismissal of the graft case filed against then Makati Mayor Jejomar Binay. Brillante was slapped with indirect contempt of court and was sentenced to one year imprisonment. The SC sustained the ruling but reduced the sentence to 1 month.

De la Cruz penned the ruling dismissing in 2010 a graft charge vs ex-Palawan Governor Joel Reyes. He also penned the decision convicting in 2012 former Nueva Ecija Governor Casimiro “Roy” Padilla Jr for failing to return a gun issued to him in 1992. He also wrote the ruling acquitting former Development Bank of the Philippines chairman Rafael Sison over a loan guarantee case.

De la Cruz completed his law studies at the University of the East, with a bar rating of 85.95%. He started out as legal researcher for a law firm. He was in the private sector before being appointed as justice. 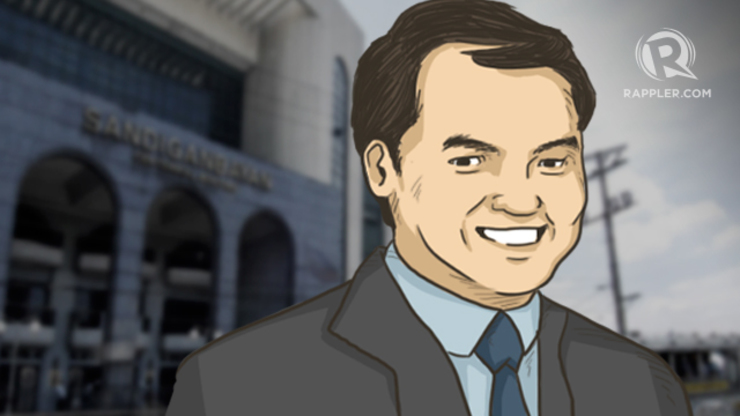 Ponferrada was one of the two justices in the division of 5 that voted to grant Arroyo bail over her plunder case involving alleged misuse of intelligence funds of the Philippine Charity Sweepstakes Office. Bail was denied with 3 justices junking her motion for temporary liberty.

In his dissent, Ponferrada pointed out that the prosecution failed to establish that Arroyo amassed or accumulated ill-gotten wealth.

“On the contrary, there is evidence showing that the said amounts were spent or used for other non-PCSO related purposes, which although highly irregular, negates or, at the very least, creates a doubt as to the existence of the offense of plunder,” he said. (READ: Sandigan denies GMA bail petition)

In the plunder case of Revilla, the magistrate extracted the admission from principal witness Benhur Luy that he did not personally see the senator receiving alleged bribes. Under interrogation by Ponferrada, the self-styled whistleblower also admitted that he did not record the alleged kickbacks received by Revilla from Napoles.

In 2011, Ponferrada was found liable for misconduct by the Supreme Court, along with Justices Gregory Ong and Jose Hernandez, for violating the Rules of Court and the internal rules of the Sandiganbayan. This was in connection with a complaint filed by a prosecutor who accused the justices of violating the rules when they conducted hearings separately instead of sitting together. (READ: Anti-graft court justice in pork scam files)

Ong was fined P15,000, Hernandez received a warning with admonition, while Ponferrada was reminded “about the proper procedure to be taken in proceedings before his court.”

Ponferrada penned the 2008 ruling convicting former Autonomous Region in Muslim Mindanao (ARMM) governor Zacarias Candao and several other officials for malversation of public funds. The cases were prompted by a special audit of ARMM funds where a total of P21 million was found to have been fraudulently disbursed. The SC sustained the findings of the anti-graft court.

A San Beda law graduate, Ponferrada passed the bar in 1971 with a rating of 83.5%. He inched his way to government service, starting as legal officer under the Office of the President during Marcos’ time. He also worked as chief of the prosecution division of the National Prosecution Service before being appointed judge. At the time he was appointed to the Sandiganbayan, Ponferrada was the presiding judge of the Manila Regional Trial Court.

In his 2013 Statement of Assets, Liabilities and Net Worth (SALN), Ponferrada declared a net worth of P22.672 million – the fourth highest in the anti-graft court. 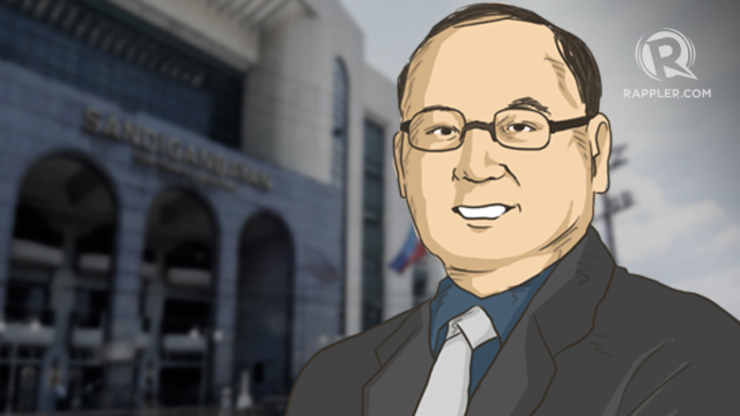 Lagos is Aquino’s first appointee to the Sandiganbayan. Earlier, he was nominated to the SC post vacated by retired Justice Roberto Abad. Lagos however withdrew from the race.

A member of the anti-graft court said Lagos may have enjoyed the backing of Executive Secretary Paquito Ochoa. Before his appointment to the anti-graft court, Lagos was a Regional Trial Court judge of Quezon City, where Ochoa served as city administrator.

Another potential link is Agriculture Secretary Proceso Alcala, who hails from Lucena City in Quezon province. Lagos was an RTC judge in Lucena City from 2000-2003.

In the PCSO plunder case of Arroyo, Lagos partnered with First Division chair Efren De la Cruz in denying her motion for bail.

In the Revilla plunder trial, Lagos, along with De la Cruz, barred Bodegon from giving interviews related to the case. At one point, he scolded the prosecution for sloppy work when they could not distinguish between a Saro (Special Release Allotment Order which is issued by the Department of Budget and Management) and a Sub-Saro (which is issued by the implementing agency).

“You should have read the Ombudsman resolution because it is all there. You brought a lot of documents but you did not bring the basic document,” Lagos said, berating the prosecutors.

Lagos wrote the ponencia dismissing in 2011 a plunder case versus Finance Undersecretary Antonio Belicena over a tax credit certificate scam. In 2012, he wrote the ruling convicting ex-Philippine National Bank official Herman Limbo for check fraud that involved millions of pesos in 1995.

Lagos obtained his law degree from the University of the Philippines in 1980 and passed the bar the same year with a rating of 89.75%.

After a series of jobs in government and the private sector, Lagos put up his own law firm. In 2003, he resigned as RTC judge and resumed private practice. In 2006, he was appointed RTC judge in Quezon City before being tapped for the Sandiganbayan. – with reports from Michael Bueza/Rappler.com