Oct 30, 2014 7:15 AM PHT
Facebook Twitter Copy URL
Copied
Businessman Antonio Tiu, who says he owns a property tagged by whistleblowers and senators as ‘Hacienda Binay,’ appears at a Senate probe anew to prove his claim 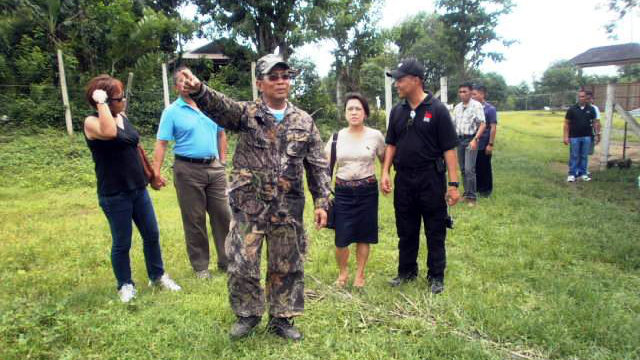 MANILA, Philippines – The land may not be under Vice President Jejomar Binay’s name, but records show that the parcels of land comprising the controversial property in Batangas are under the name of Binay’s former aides, friends, and their family members.

According to documents from the Rosario Municipal Assessor’s office, at least 15 parcels of land in the vast property are under the names of people with direct or indirect links to Binay. 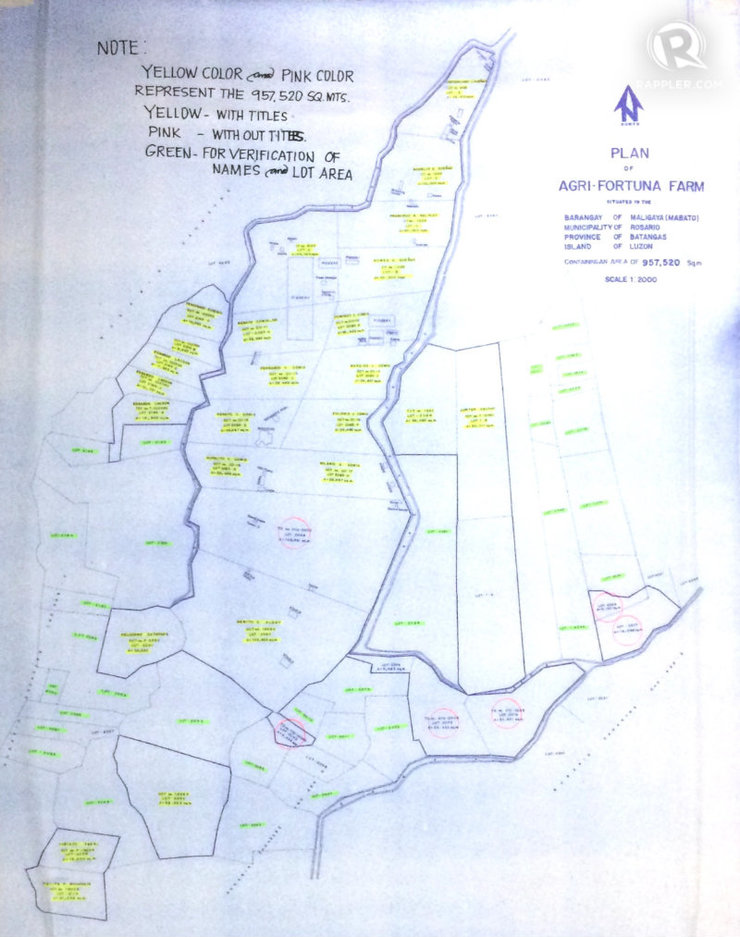 Agrifortuna Inc is a company founded by Vice President Jejomar Binay and his wife, former Makati mayor Elenita Binay, along with Gregorio and two others. The Binays sold their interest in the company in 1995 but kept 9 hectares for the Vice President’s JCB Farms, located within the 145-hectare Batangas estate. Binay eventually divested from the farm in 2010, when he was elected vice president.

“Hacienda Binay” was once owned by Agrifortuna Inc, a company founded by Binay and his wife Elenita, along with Laureano Gregorio Jr and two others.

The property has since been sold to Sunchamp Real Estate Development Corporation and its owner, businessman Antonio Tiu.

But the senators leading the probe into the allegations against Binay – Senators Antonio Trillanes IV and Alan Peter Cayetano – insist that Tiu only acts as a dummy for the Vice President. Binay has denied these allegations, while Tiu insists he is the legitimate owner of the property. (READ: Does Antonio Tiu really own ‘Hacienda Binay’?)

The Senate Blue Ribbon subcommittee is set to hold its 10th hearing this Thursday, October 30. Tiu, who faced the subcommittee in its last hearing, is expected to attend the Thursday hearing and will bring along with him some documents the subcommittee was looking for.

Tiu told Rappler he would be submitting his Memorandum of Agreement with Gregorio for the purchase of the property.

Agrarian Reform Secretary Virgilio de los Reyes is also expected to make an appearance before the subcommittee to speak on areas of the property covered by the government’s Comprehensive Agrarian Reform Program.

Where are the titles?

Tiu, a 39-year-old businessman, has denied acting as a dummy for Binay, whom he said, he has met only thrice. The young billionaire has ties to the Vice President, going by campaign contributions of his younger brother James who, along with his wife, donated P15 million to Binay in 2010.

Although the subcommittee was formed to investigate an allegedly overpriced Makati building, it has since turned into a forum for “whistleblowers” – most of them former friends and foes of the Binays – to accuse the Vice President of rigging bids and receiving kickbacks during his time as Makati mayor.

Mercado and other resource persons said this was how Binay amassed and hid his wealth.

Senators during the last hearing pressed on Tiu to produce land titles for the property – the 145-hectare Sunchamp Agri-Tourism Farm – to prove that he was, in fact, its owner. (PHOTOS: Binay and wife tour guests in ‘Hacienda Binay’) 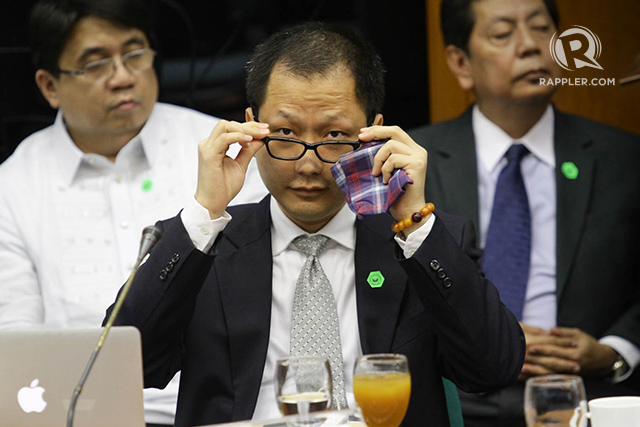 Tiu said he could not produce any but said he already has “full, enforceable right to the property” as stipulated in his contract with Gregorio.

In an interview with Rappler, Tiu said the senators grilling him over the property simply don’t have good business sense.

“[I got] low downpayment, installment. Technically, I can make a lot of money from the produce and income, and later on I can use the proceeds to pay for my remaining balance,” said Tiu.

But to senators in the subcommittee, this simply means Tiu is still not the owner of the land.

All in all, the Agrifortuna property has at least 64 parcels of land. Of these, 15 have identified land titles under the names of 13 people with apparent links to Binay:

But Francisco Baloloy himself has links to Binay, according to a 2005 report by the Philippine Center for Investigative Journalism. Francisco Baloloy, Binay, and deceased Polytechnic University of the Philippines president Nemesio Prudente were once accused of plotting to assassinate former Makati mayor aspirant Augusto Syjuco. The accusation was made by Syjuco ally, Roberto Brillante, for which he was charged with libel.

The Dueñases, Mercado told Rappler in a previous interview, are also related to the Baloloys. Businessman Edgardo Lacson, meanwhile, is a friend of the Vice President. Lacson and his wife, Milagros Lacson, once accompanied Binay to Berlin as part of his official delegation.

Rosario native Renato Comia is one of Binay’s former security aides. Renato Comia Sr’s wife Asucena was listed as having donated P100,000 in cash to Binay’s vice presidential campaign in 2010. (READ: The Lord of Makati: Can Binay explain his wealth?)

The Comia family owns a combined 21.2 hectares of land in what was once the Agrifortuna Farm.

Based on documents, most of the property’s key structures – a piggery that was once leased by Binay, and a mansion or “main house” that is being turned into a “club house” – are located in parcels of land owned by Renato Comia Sr, Domingo C. Comia, and Fernando V. Comia. 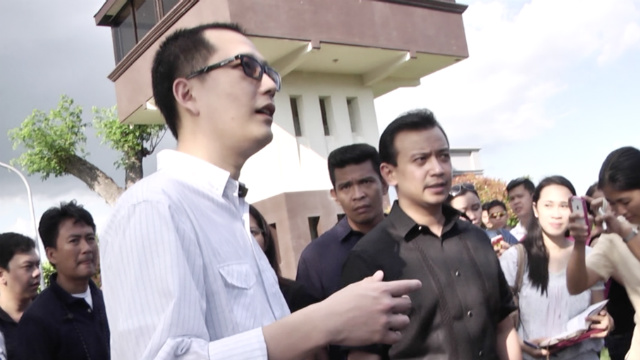 Trillanes on Tiu: From ‘good friend’ to ‘Binay’s dummy’

Despite the senator’s insistence that the absence of land titles means Tiu is not the real owner of the Sunchamp Property, Tiu said there was nothing fishy about the good deal he got from Gregorio, whom senators have also tagged as Binay’s dummy.

The now-controversial businessman was criticized by senators for not exercising “due diligence” in purchasing the land, which was brokered by Tiu’s long-time friend, lawyer Martin Subido.

Subido is a lawyer of the Vice President and law firm partner of his daughter, Makati Representative Abigail Binay.

Based on Sunchamp’s tax declarations of real properties, its properties within the controversial estate have an assessed value of over P7.2 million.

The Rosario municipal assessor’s office, however, has no documents to show that Sunchamp, purportedly already the owner of the land, was given the right to build structures within the property.

Senators will likely be grilling Tiu about this during Thursday’s hearing.

The series of exposés against Binay had built up to what is his largest corruption scandal to date. (READ: ‘Oplan Stop Nognog 2016 figment of Binay’s imagination’)

The Binay camps says the hearing, the exposés, and the plunder case filed against him are all part of “Operation Plan Stop Nognog 2016,” a supposed scheme to ruin his chances at becoming president come 2016.

Binay is so far the only candidate who has announced plans of running for higher office. Trillanes and Cayetano have both expressed interest in seeking higher office, but neither have announced definite, concrete plans.

The Senate probe has taken its toll on Binay – his ratings in surveys have slid, although he remains the country’s most trusted public official, also still leading among would-be 2016 presidential bets. – Rappler.com