Can Antonio Tiu tell a lie?

Nov 2, 2014 6:05 PM PHT
Bea Cupin
Facebook Twitter Copy URL
Copied
Under intense grilling by senators, Antonio Tiu, the billionaire businessman at the center of one of the country’s most sensational corruption scandals, refuses to point fingers. He talks to Rappler about life in the fast lane. 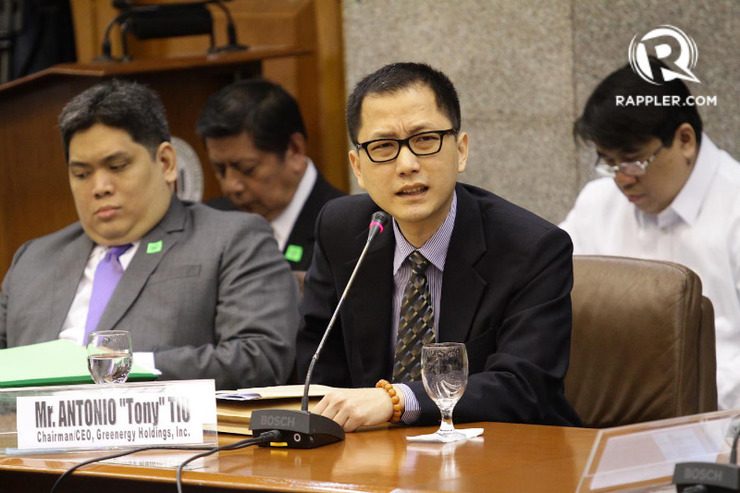 MANILA, Philippines – He’s been accused of being a liar and of being the dummy of Vice President Jejomar Binay.

“How can we get to the bottom of this when you lie to our face?” Senator Alan Peter Cayetano barked at businessman Antonio Tiu, almost two hours after the billionaire was grilled over the purchase of a controversial 145-hectare in Rosario, Batangas referred to as “Hacienda Binay.”

In the course of two almost 6-hour-long Senate Blue Ribbon subcommittee hearings, Tiu had tried to explain that it’s impossible for him to be the dummy of the Vice President. Claiming he has “nothing to hide,” Tiu has tolerated and withstood the long interrogations by senators and members of the media.

A Christian and a practicing Buddhist (in the Senate, he said he follows the Confucian philosophy), he has managed to remain cool and collected under all the intense grilling. He said he makes it a point to sleep by 11 pm – the time, he explained, when vital body organs are supposed to be in need of rest – and wake up by 5 am to meditate. It’s part of his daily routine. And to relax his mind, he does Chinese calligraphy.

The lanky businessman spends most, if not all, of his time working: 3 weeks out of every month are spent overseas, expanding his 30-company-strong portfolio. There is no such thing as weekends.

About 20 years ago, his 45-year-old father passed away, leaving the heavy burden of looking after the financial needs of the family on his then 19-year-old son.

The family business had to be liquidated because of a fire accident. The family incurred a debt of about P10 million and his mother decided to absorb it. “She believed that reputation means more than anything else,” Tiu said, adding, “That’s the best decision she made for us. At least I had a clean start.”

Describing himself as a “young man in a hurry,” he worked 7 days a week, 16 hours a day, with no vacations during the holidays. “I figured, if I work that way, I could achieve in 10 years what most people achieve in 30.” The road to agriculture

Farming was never supposed to be in the books for Tiu, at least if his parents had their way. His dream school was the University of the Philippines in Los Baños (UPLB) because he’s always been attracted to agriculture. But he would not have his way.

He ended up going to De La Salle University (DLSU), pursuing commerce, major in management degree. A year after graduation in 1996, Tiu and some of his friends set up Mabuhay 2000 Enterprises. He dabbled in selling Taiwanese-made equipment, most of which were post-harvest equipment. As he traveled around the country to find clients, Tiu got to interact more with farmers.

At around the same time Tiu was working on getting Agrinurture Inc listed in the PSE, he had already known Leonor Briones, former national treasurer and a professor of his at the National College of Public Administration and Governance (NCPAG). She would eventually sit as director in one of Tiu’s companies, Greenergy Holdings Inc.

It was the Agriculture Department officials he got to know who recommended that Tiu enroll in NCPAG to better understand the government bureaucracy. He did in 2006 and pursued a doctorate degree in public administration.

But upon the urging of Briones herself, Tiu pulled out of the program after 4 semesters. Briones said, “I was the one who advised him after a few semesters. I told him, ‘Why don’t you just concentrate on your business because you’re creating new employment?’”

Of her former student, Briones said, “He struck me as a very contemplative. His view was not limited to Philippines business, but the whole society. We would have very long discussions on government. He was asking about how to change society, how to introduce change in governance.”

Tiu’s work in the agriculture industry has not gone unnoticed. He bagged the Ernst and Young Emerging Entrepreneur award in 2009 and the Top Outstanding Young Men award two years later.

On its website, Agrinurture boasts of having become one of the country’s top fresh mango exporters, also a supplier of fruits like banana, sweet pineapple and papaya to customers in China, Japan, Korea, the Middle East, Europe and North America.

“This is something that I always tell people: there’s always that thing that touches your heart. And for me, it’s really agriculture,” Tiu added.

Starting out as a semiconductor operating company, Greenergy or Green, began venturing into the field of renewable energy by the latter part of 2010.

Tiu said, “Before my father died… everything we needed was amply supplied. There was no pressure to excel. But because of the sudden death, the financial burden of the family was on my shoulders. I had to be able to take the responsibility.”

‘I ran too fast and everything came too soon’

Friends till the end

The controversy generated by the Senate investigations and the links to Binay have affected Tiu’s businesses, for sure. Repeatedly he has said he has met the Vice President only thrice and that ties to him can be traced mainly through his close friend, Martin Subido.

The lawyer and long-time buddy is a law partner of Makati Representative Abigail Binay, the Vice President’s daughter. Subido also represents the Vice President and was one of the lawyers who presented Binay’s Statement of Assets, Liabilities, and Net Worth (SALN) to the media.

Tiu first met Subido in the mid-90s when he was a college student at De La Salle. If he had gone to UPLB instead, their paths would never have crossed.

After graduation, Subido, armed with an accountancy degree, went to the Ateneo Law School where he obtained his Juris Doctor degree with honors. Tiu started a business and obtained his masters degree in commerce, specializing in international finance from the University of New South Wales in Australia.

Business and friendship have since made for a comfortable marriage.

Subido now sits as board member or corporate secretary in at least 16 of Tiu’s Philippine companies, including the two listed in the Philippine Stock Exchange.

It was also Subido who brokered the deal between Tiu and Laureano Gregorio Jr involving the sprawling property in Batangas, suspected to be owned by the Binays.

Tiu insists the Batangas property is not “Hacienda Binay” but “Sunchamp Agri-Tourism Farm,” the embodiment of his dreams for the country’s agriculture industry.

His other arguments: he has billions in stocks, has big-time foreign and local investors to answer to, and a self-built empire to protect. Why would he risk all that by acting as the Vice President’s dummy? But the probing senators would not believe him.

Although Subido reportedly wasn’t present when Tiu and Gregorio discussed the final details of the Batangas deal, it was the young lawyer who did the due diligence report for Tiu.

It was Subido’s close ties to the Binays that raised the alarm for senators in the first Senate probe.

He laughed at the thought of the controversy affecting their friendship in any way. “Sabi ko sa kanya, ‘Hindi, walang iwanan na ito,’” he added. (I told him, “No, this doesn’t change anything. We’ll stick together until the end.”)

Besides Subido, there are other links to Binay. Tiu’s younger brother James and wife donated over P15 million to the Vice President’s 2010 campaign. But Tiu has dismissed this link, saying James is his own man with his own dreams, some of which are admittedly political.

Although he has been criticized for “lawyering” for Binay, Tiu has never actually defended Binay himself. He did, however, passively defend Gregorio.

After almost 4 hours of questioning in the last Senate hearing, Cayetano asked Tiu point-blank: Are you or are you not Binay’s dummy? The businessman quickly denied this. Cayetano then pointed his guns toward Gregorio.

“Given everything you’ve seen…is it possible that Laureano Gregorio is the dummy of the Vice President?” Cayetano asked Tiu.

“I would not be able to speak for Mr Gregorio,” Tiu replied.

Cayetano pressed further. “I am asking you to speak for yourself. I want to know the opinion of Mr Tiu, not Mr Gregorio,” said the senator in a mix of English and Filipino.

Tiu would not budge. “Ang opinion ni Mr Tiu [ay] wala siyang karapatan na sabihin na si Mr Gregorio ay dummy o hindi.” (Mr Tiu’s opinion is that he has no right to say whether Mr Gregorio is a dummy or not.)

Even prior to the hearing, Tiu said it was not in his nature to bring anyone down or to speak ill of others. Trillanes, who was uncharacteristically quiet during Tiu’s second appearance before the Senate, then interjected: “I’ve formed my opinion. This only goes to show that Mr Tiu is part of the cover-up.”

Tiu’s team of lawyers could only shake their heads as Trillanes berated their client. 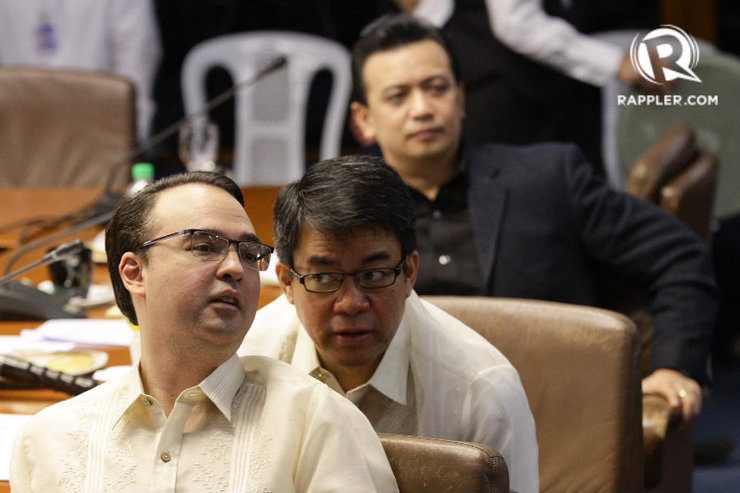 “No words can really express how I feel right now in terms of the frustrations over this political mess that’s being thrown against me,” Tiu told Rappler, days before the heated exchanges in the Senate.

In hearings, senators nitpicked at tiny details pertaining to the Sunchamp property. When asked the names of the so-called clubhouse’s hired help, Tiu was unable to give any.

“Of course, I’m the CEO,” was his reply to the senators’ questioning.

So far, Tiu has yet to produce documents to give the Batangas property a clean bill of health, especially in the eyes of Binay’s detractors.

He has no land titles; only tax declarations and a one-page, unnotarized Memorandum of Agreement signed by Tiu and Gregorio, from whom he purchased the property.

The land which Tiu has claimed ownership over also turned out to be under the name of the Vice President’s friends, former aides, and their family members.

The dream Tiu has been building for nearly two decades is also turning into a nightmare. His company’s stocks are dropping, and his family, distraught. Tiu also faces possible tax evasion charges over the Batangas property.

The last Senate hearing ended with a threat from no less than Trillanes: “In due time, we will reveal the hundreds of millions that Antonio Tiu withdrew from a Quezon City bank.” The accusations against him have now evolved from being Binay’s dummy to being a money launderer.

A visibly dejected and tired Tiu cracked a weak smile and declined media interviews, hurrying off with his team of lawyers as soon as the senators left the session hall.

Many were left wondering, “Was Antonio Tiu lying? If he was, who is he protecting and why?” – Rappler.com