The Jojo Binay that Mercado knew 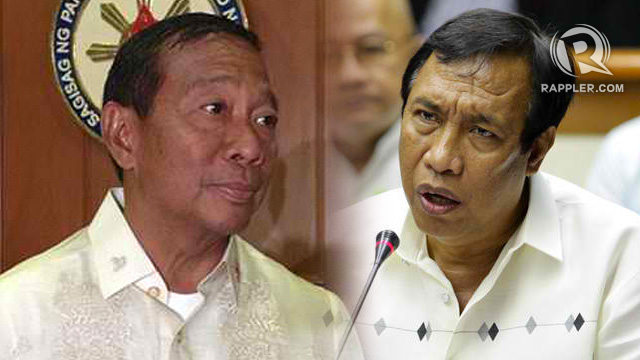 From money, business and legal matters, to love affairs and even marital woes, Mercado was there to lend Binay a helping hand.

Mercado has since turned from friend into foe, dishing out exposé after exposé on the alleged hidden wealth of his former patrons, which, before, was just fodder for loose talk in coffee shops.

The ties that bind him to the Binays have not been refuted by the Vice President, even as he tagged Mercado as part of a conspiracy to bring down his presidential bid in 2016.

Binay said Mercado – “a guy who lost a lot from gambling” – was supposedly paid millions of pesos to lead the charge against him.(READ:Binay: Roxas behind ‘Oplan Stop Nognog 2016’)

The two men were part of a triumvirate of Makati local officials who forged a friendship that went beyond personal. The third member was former city engineer Nelson Irasga.

In the previously published investigative piece, “The Lord of Makati; Can Binay explain his wealth?“ author Miriam Grace Go (now Rappler news editor) wrote that Binay, Mercado and Irasga were business partners before the latter had a falling-out with the Binays.

When Binay was appointed OIC-mayor in 1986 following the EDSA revolution, Irasga was among the local employees retained by him. At the time, Makati was still a municipality and Irasga was working at the Makati engineering unit.

“BInay appointed Irasga as municipal engineer. He was the one dealing with the contractors who were not paid by former mayor (Nemesio) Yabut,” Bondal recalled.

One of the unpaid contractors then was Mercado who had a P9-million collectible with Makati for surveying services.

Binay thought Mercado was allied with his growing number of critics who were plotting to expose the shenanigans in Makati. Among Binay’s foremost early critics then was former councilor Roberto Brillante, also a friend of Binay during the martial law years.

’Binay is shy with women. He does not know how to court women he fancies,’ said Mercado.

It was Brillante who first questioned the ongoing anomalies in Makati and who sounded off former vice mayor Conchitina Bernardo. The socialite resigned in 1989 as vice mayor months after being elected in 1988 supposedly for health reasons. But Brillante said Bernardo quit after she could no longer stomach what was going on inside Makati.

At the time, Mercado said he was an “alalay,” merely acting as an aide to Bernardo.

“We were at the Ritz Tower in Makati and the then vice mayor Bernardo was contemplating resigning. I told her she’d be a coward if she resigned,” Mercado said. Somehow, what transpired in the Ritz meeting filtered through Binay’s camp, and Mercado was identified as one of those who was vocal against the mayor.

Binay retaliated by withholding Mercado’s payment for his surveying contracts, but Irasga sought to smoothen things out between the two men.

“One time, Irasga told me why Binay was antagonistic towards me,” Mercado recalled. He took it as a cue that he had to talk to Binay and explain his side. The two met and decided to bury the hatchet so that by 1990, Mercado was also able to collect his P9 million payment.

The act sealed Mercado’s loyalty to Binay. “I told the Mayor, I will be forever indebted to you.”

In 1992, Binay convinced Mercado to run for councilor. It was a friendship that would last for 20 years.

Binay, Irasga and Mercado would form a solid friendship that would go beyond the walls of city hall. Apart from co-owning businesses in Makati, Mercado and Irasga also allegedly acted as fronts for Binay in hiding ill-gotten wealth. The two also formed Meriras Realty, a juxtaposition of their respective surnames (Mercado-Irasga). The company had other alleged dummies of Binay, particularly businessman Gerry Limlingan, as officers. Limlingan, well-versed with finance and money matters, would eventually replace Irasga and Mercado as Binay’s fair-haired boy.

As keepers of Binay’s hidden wealth and his personal secrets, Mercado and Irasga also acted as his love consultants. “Binay is shy with women. He does not know how to court women he fancies,” Mercado said in Filipino.

A source who is in the know said it was Mercado who advised Binay to try to save his marriage with Elenita when she found out about his paramour. Reports of Binay having a supposed mistress surfaced during the 2010 campaign. Binay admitted to his infidelity, but maintained he had settled the issue with his wife. “I already atoned for my sin,” he told a television interview.

When Binay was about to complete his 3 terms as mayor, Irasga entertained thoughts of succeeding his erstwhile friend. Aiming to become the next mayor was not entirely Irasga’s fault. Feeding his ambition, “Binay would introduce Irasga as the next mayor to Makati residents,” Mercado narrated.

Irasga pleaded with Binay to give his blessings. “Pare, kasukdulan akong lumuhod sa harap mo, pagbigyan mo lang ako,” Mercado quoted Irasga as asking Binay. (If I have to kneel before you, I will do it, just give me a chance.)

But as the deadline for the filing of candidacy for the 1998 polls inched closer, the gentleman’s agreement between Irasga and Binay never materialized. Iraga would later find out that Binay would anoint his wife to be the next mayor for only one term, after which he would reassume the post as Makati mayor.

Initially, Irasga was willing give way to Binay’s wife. “Kausapin man lang ako,” Irasga would tell Mercado. (If only Binay would only talk to me to tell me.)

When Binay found out that Irasga would push through with his mayoral ambition under a different political party, he asked Mercado to set a meeting. Irasga and Mercado thought Binay would then clear matters up.

The meeting pushed through, but what Irasga and Mercado had wanted did not happen: clarifying the mayoral race issue. In the end, Binay never brought it up. “That’s one of Binay’s weakness – he can’t say things directly,” Mercado said.

When the political estrangement became inevitable, Mercado chose to be with the Binays. After all, he was tapped by Binay to be his wife’s running mate in the 1998 polls.

Mercado also lost the vice mayoral race to Irasga’s running-mate, actor Edu Manzano. After 9 years of dabbling in politics, “I thought my political career was over in 1998,” Mercado thought.

With Irasga out of the picture, Mercado became one of the Binays’ most trusted allies. In fact, he was one of Senator Nancy Binay’s godfathers in her wedding. The senator herself volunteered the information after Mercado testified at a Senate hearing on the alleged overpricing in the construction of the Makati parking building.

Contradicting his claim that bribe money also found its way to Nancy Binay’s hands, the senator replied that the only thing she remembered getting from Mercado was a wedding gift.

In 2001, when Binay sought a fresh mandate, Binay resurrected Mercado’s political career by asking him to be his running-mate. Mercado was reluctant, but Binay had his way.

In 2004, Mercado suffered from an aneurysm and thought of backing out from seeking a second-term as vice mayor. When he told Binay that he could not campaign in his condition, Binay reassured him that he would take care of everything. Mercado won.

In the 2007 mid-term race, Mercado again expressed his desire to retire from politics but Binay would not hear of it. Binay told him to complete his term and that he wanted him to run for mayor in 2010.

“He went to my father, who was ill at the time, to get him to convince me to run for mayor,” Mercado said. He told his father he was still hesitant because of what happened to Irasga. But his father told him that because Binay took the trouble to visit him in his sick bed, he would likely keep his word. Mercado agreed.

From Binay, Mercado learned the art of politics. He also saw how Binay supposedly greased his way with priests. “Every Sunday, he would hear Mass in different parishes. He would arrive 15 minutes before the start of Mass and in full view of everyone, would talk to the parish priest. He would scan the church and notice things that needed fixing. He would tell the parish priest, within hearing distance of everyone, he would finance the improvements,” Mercado said in Filipino.

Binay advised Mercado to do the same, but Mercado was not a perfect disciple. He said he would rather spend time with his family than socialize to gather more votes.

Just like what he promised Irasga, Binay assured Mercado he would be the next mayor. Mercado insisted he only wanted a single term as mayor – he said he and his wife had agreed before that he would retire from politics by the time he reached 55 so they could travel around the world.

Retiring from politics in 2010 would have been perfect, but the mayoral post proved irresistible. “Tutal, isang term lang naman,” he justified his decision to run for mayor. (It’s only one term anyway.)

Sometime in September 2009, just when Mercado thought he was already the presumptive bet of the Binays, Limlingan, who was by then close to Binay, had an audience with Mercado. In that meeting, Limlingan allegedly relayed the Binays’ conditions before he could be anointed as their mayoral bet.

The conditions, according to Mercado were three-fold:

Mercado found the 3rd condition difficult and impossible to accede to. The family, according to Mercado, was not pleased. Mercado said Mrs Binay and the other Binay children did not particularly like him, except perhaps for Makati Representative Abigail Binay who seemed sympathetic because she knew what her father had promised him.

Former Makati administrator Marjorie de Veyra however has a different take on why Mercado fell out of grace. De Veyra said Mercado “abused the trust and confidence” reposed by the Binays. She said the Makati City government was planning to file charges against Mercado for alleged anomalies when he was vice mayor. (READ: ‘Mercado not credible, abused VP Binay’s trust‘)

Two weeks before the deadline for the filing of candidacy for the local race – when it was clear that Mercado would push through with his mayoral candidacy – he (Mercado) supposedly got a call from the former mayor of Makati. Binay expressed his displeasure about how Mercado supposedly was rude to his son, Jejomar Erwin “Junjun”, during a council session.

“Pag nasasaktan ang anak ko, nasasaktan din ako,” Binay told him. (I also get hurt when my son is hurt.) Mercado thought it was then that they decided to field Junjun Binay, then a councilor, to succeed his father.

Knowing Binay’s penchant for beating around the bush, Mercado knew it was going to be the end of their friendship. He belatedly found out, too, that the week before, the certificate of candidacy of Binay’s son had already been notarized. – Rappler.com