Feb 24, 2015 5:55 PM PHT
Marites Dañguilan Vitug
Facebook Twitter Copy URL
Copied
(UPDATED) Our fact-checking shows he did not complete his courses in both universities, but he says in a statement, his educational records are accurate 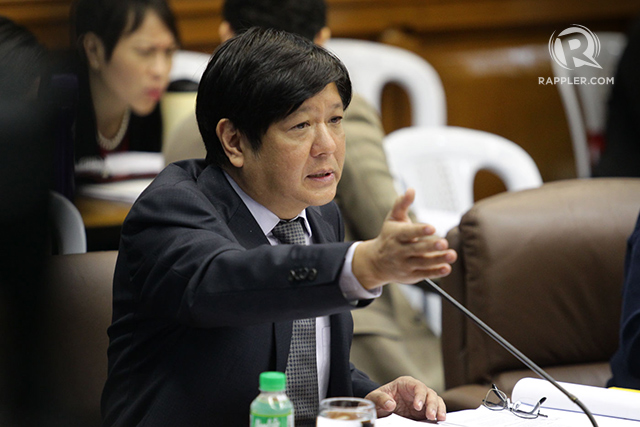 MANILA, Philippines (UPDATED) – During his presidency, Ferdinand Marcos sent his only son and namesake, Ferdinand Jr or Bongbong, to prestigious schools in England and the US.

Now a senator, Bongbong Marcos lists in his resumé the results of his overseas education: a bachelor of arts degree in philosophy, politics* and economics from Oxford University (1975-1978) and a master’s in business administration (MBA) from the Wharton School of the University of Pennsylvania (1979-1981). 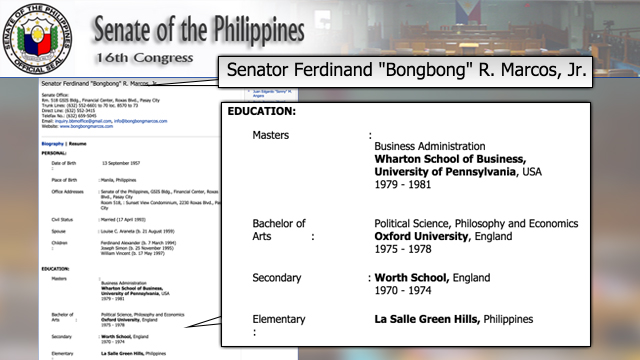 29 years after EDSA 1, when his father was deposed by a popular rebellion, Marcos Jr is mentioned as one of the possible candidates in the 2016 presidential elections. If his mother Imelda were to be followed, Marcos Jr would run for president and bring the family back to Malacañang.

Our fact-checking shows, however, that Marcos Jr’s claims are false. Oxford University and Wharton School records do not show any Ferdinand Marcos Jr in their lists of graduates.

A visual timeline, posted on Marcos Jr’s website, details milestones in his life. It is interesting that his grade school years at La Salle Greenhills (1963-1969) are complete with report cards and class photos, but his college and post-graduate years in Oxford and Wharton School, respectively, are empty, except for a single picture of him, in a beret, in the Oxford campus. (READ: What’s so special about Oxford, Wharton?)

At Oxford, Marcos Jr attended St Edmund Hall, one of its colleges, starting October 1975. He claims to have graduated in 1978 but the 1977-1978 university calendar, which contains the names of all those sitting for their final exams in each subject, does not include him. The calendar, which is filed at the University’s Bodleian Library, is accessible to the public.

We sent e-mails inquiring about the status of Senator Marcos to two persons, Professor Keith Gull, principal of St Edmund Hall, and Philippa Machin of the Development and Alumni Relations of the same college. Gull did not reply.

Machin referred our e-mail to Robert Wilkins, a senior tutor of St Edmund Hall, who, in turn, referred us to the university calendar. He wrote us: “Data confidentiality concerns mean that we cannot discuss individual students of the Hall, but Class lists for Final Honour School examinations were historically published in the University Calendar. Past copies of the Calendar are on open shelves in the Lower Reading Room in the Bodleian Library and can be freely consulted there.”

Our sources, who commenced at the same college as Marcos Jr in 1975, say that he stayed for only a year. One of them wrote in an e-mail: “It is my understanding that he was sent down (expelled)…Having failed his Prelims (first year exams), Ferdinand Jr never completed his Bachelor degree at Oxford. It is possible that he might have received a face-saving diploma, which is not the degree that he claims.”

Marcos Jr’s claim of a bachelor of arts degree in philosophy, politics and economics, the same source wrote, is an “unequivocal fraud.”

We asked Carla Montemayor, a Rappler contributor who lives in London, to check the Oxford University calendar. She visited the Bodleian Library and found printed volumes published annually by the Oxford University Press. Among a calendar’s contents are class lists for each course of study during an academic year.

Montemayor explained: “The class list is the roll of students who successfully completed their degrees. This means they have complied with course requirements and passed their final examinations. Each course has Class I, Class II, and Class III students, where Class I (first-class honours) names the students who achieved the highest marks possible in their course.”

All Oxford students who are awarded their degrees and qualified for honors at the end of an academic year are included in the class lists of the university calendar.

The class list format goes this way: course, Class I, Class II, Class III, alphabetical list of students in each class: surname, first and second initials, college. Marcos Jr does not appear in any of these 3 classes. 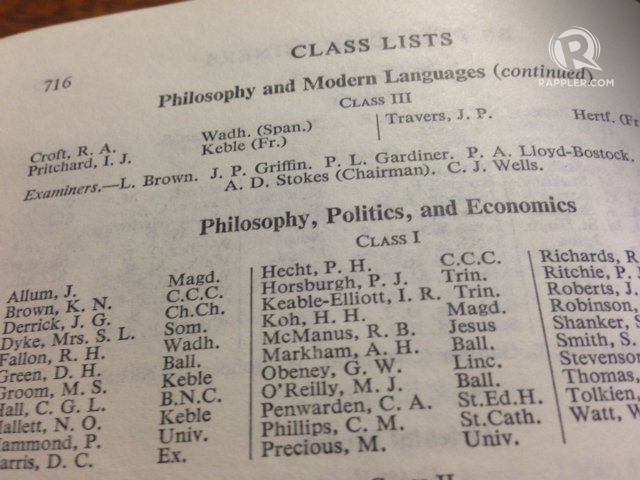 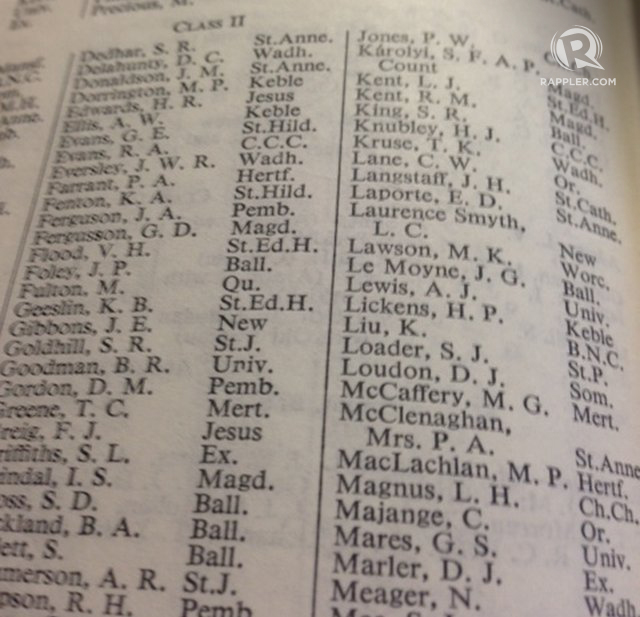 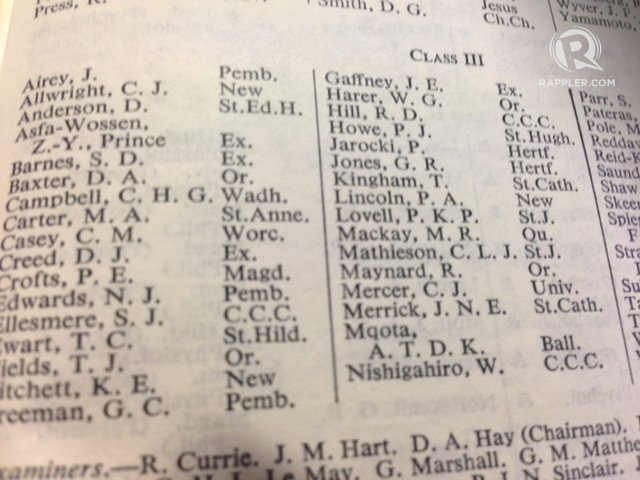 No MBA from Wharton

The case in Wharton School is similar. Professor Justin McDaniel of the University of Pennsylvania personally checked Marcos Jr’s status after we were informed of the university’s strict privacy rules. He spoke with the director of the MBA program and this is what he sent us via private message on Facebook:

Marcos Jr entered the MBA program in 1979 and attended until the fall of 1980. However, he withdrew sometime during this period or early spring in 1981 and never graduated. They do not know why. However, Wharton confirmed that Marcos Jr went there but never graduated.

Before we obtained this confirmation, we had already gained access to a comprehensive alumni database of the University of Pennsylvania, as of 2012, and did two searches, one by first name, and the other by surname. The name of Marcos Jr did not appear in both searches. 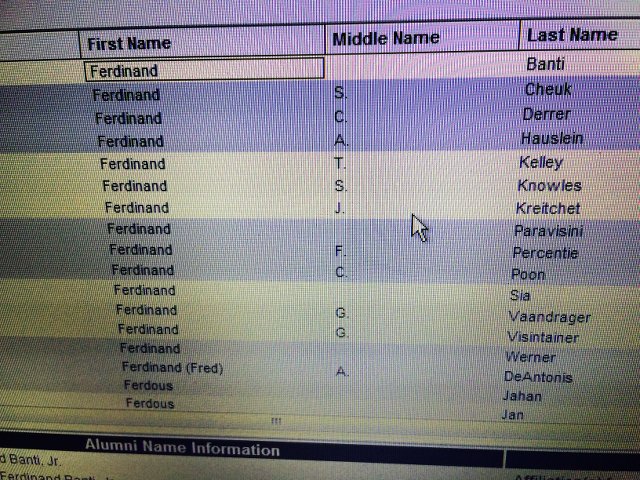 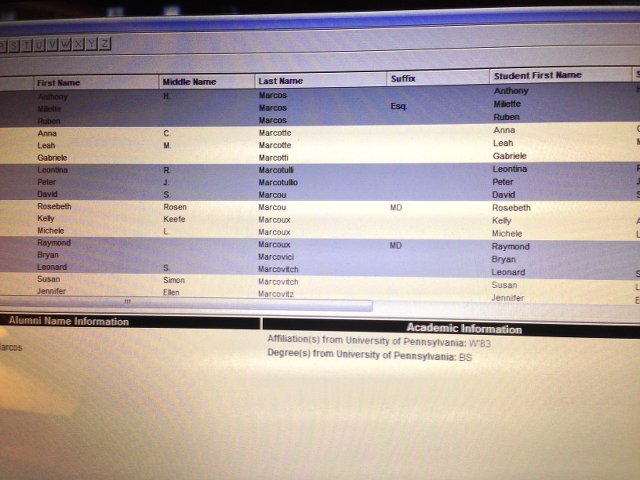 We then sent repeated queries to the alumni office of the University of Pennsylvania but we received this puzzling reply: “Mr Marcos graduated from our Wharton Graduate program in 1981, unfortunately due to privacy rules I am unable to give any further information.” The e-mail was sent by a Stephanie Stapleton.

It was then that we asked Professor McDaniel to make inquiries – thus the confirmation from the MBA program director of Wharton.

One question remains unanswered: how did Marcos Jr get accepted to Wharton School without an undergraduate degree from Oxford, as he claimed?

In the Philippines, Marcos Jr is an accepted member of the Wharton-Penn Club, composed of alumni. In 2010, the Club, then led by Peter Coyiuto, honored 4 alumni, including Senator Marcos.

To a certain extent, Marcos Jr’s false claims are reminiscent of his father’s World War II medals which turned out to be fake. US government documents showed that these had no basis, as extensive research by historian Alfred McCoy and Marcos opposition leader Bonifacio Gillego showed.

Senator Marcos declined our repeated requests to be interviewed, either in person or by telephone. He, however, released a statement Tuesday night, saying his educational records at Oxford and Wharton are “accurate.”

He said, “I earned a diploma in political science at St. Edmund Hall, Oxford University in England in 1978.” He did not specify it to be a bachelor’s degree.

He also said, “I thereafter did post-graduate studies at the Wharton Business School, University of Pennsylvania, USA, taking up Masters in Business Administration. I was, however, unable to complete the course because I was elected Vice Governor of Ilocos Norte, and had to return home to serve my provincemates (1980-1983).”

Marcos Jr, who is on his first term in the Senate, is among those included in the surveys of Pulse Asia and Social Weather Stations (SWS) on presidential preferences, although he is consistently at the lower end. In a November 2014 poll of SWS, only 3% of the respondents named him one of the “best leaders to succeed Pres. Noynoy Aquino in 2016.” Similarly, a Pulse Asia poll also of the same month showed that 4% would vote for him as president “if the elections were held today.”

He is also on the radar screen for vice president, although he is not a top choice. The Pulse Asia poll of November 2014 showed him to be the 5th choice (8%), tied with Senator Antonio “Sonny” Trillanes.

In the same survey, Marcos Jr is in the magic 12 for senatorial preferences, ranked anywhere from 4 to 10. 40% of the respondents said they would vote for him.

On the 85th birthday last year of Imelda Marcos, the former first lady stressed that her senator son was “qualified” to contest the presidency.

When asked by reporters, Marcos Jr dismissed his mother’s statement as a “dream” and said it was “too early to think about it.” – with a report from Carla Montemayor in Oxford, Rappler.com

*Editor’s Note: In a previous version of this story, we indicated Political Science, Philosophy and Economics as an Oxford degree. We corrected this to say Philosophy, Politics and Economics.