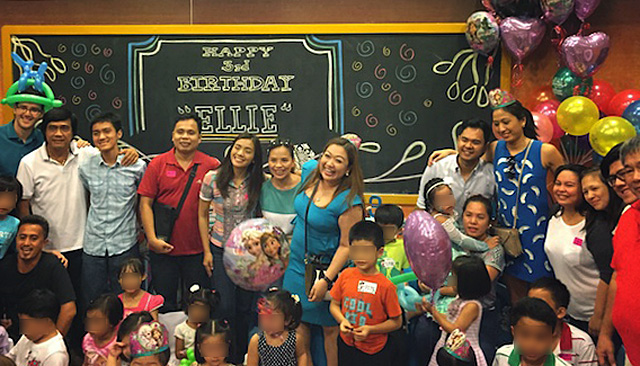 MANILA, Philippines – While news of the return to Manila of Jeane Napoles was confirmed by the Bureau of Immigration (BI) only in mid-March, the daughter of Janet Napoles – the alleged mastermind of the biggest corruption scandal in the country’s recent history – was sighted in a party in Manila as early as October 2014.

Napoles had previously denied her daughter was back in the country. A GMA News report on March 20 quoted her as saying, “Siguro naman kung nandito na siya, isa ako sa mga unang makakaalam.” (It’s likely I would be the first to know if she were here.) She also said Jeane was set to arrive this week, if not late last week.

But contrary to Napoles’ claim, a smiling Jeane was photographed with family members in a children’s party on October 10, 2014. The party was a celebration of the birthday of her cousin Ellie, youngest daughter of Reynald “Jojo” Lim.

Jojo, Janet’s brother, is her co-accused in an illegal detention case for kidnapping pork barrel scam star witness Benhur Luy. Jojo, who has an arrest warrant against him, has been at large since August 2013. His passport has also been canceled.

Aside from Jeane, the photo shows Janet’s husband Jaime, Janet’s youngest child Christian, her older children, Jo Christine and James Cristopher – both of whom are also facing graft charges – and Jojo’s wife Anna Marie Dulguime, among others.

Janet Napoles, nicknamed the pork barrel queen, is currently detained as she faces 5 counts of plunder, 74 counts of graft, and 14 counts of malversation. Napoles is accused of funnelling millions of pesos of taxpayers’ money to her fake non-governmental organizations (NGOs) and colluding with lawmakers to pocket the funds. (READ: Janet Napoles: From scandal to surrender)

Her two older children are accused of being heavily involved in the scam, while Jeane, her youngest daughter, faces a P17.8 million ($396,610)* tax evasion case. Jeane was put under the spotlight after social media posts of her lavish lifestyle were exposed, amid prevailing sentiment the money which sustained her was ill-gotten. Photos and blogs showed her in designer shoes and clothing, while a Rappler report exposed her luxurious apartment in downtown Los Angeles. (READ: Napoles couple on tax evasion: Blame us, not Jeane) 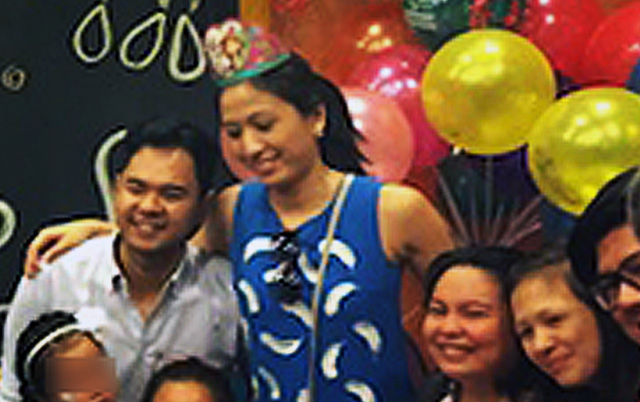 That price includes 4 different party themes to choose from, including Pirates, Carnival, Princess and Under the Sea. The party had a Frozen theme, after the popular Disney movie.

The package does not include food for adults, which, according to the source, was catered.

Additionally, there were several food carts offering popcorn, hotdogs and nachos, among others, as well as a face painter.

The birthday cake of the celebrant was especially distinct, having been created by Penk Ching, a world-class cake artist. Ching has made cakes for various historic events such as the Beijing 2008 Olympics, the inauguration of President Benigno Aquino III, and the University of Sto Tomas’ 400th anniversary.

Also in the picture is GMA-7’s news anchor, Vicky Morales. Morales is at the center of the photo which includes the whole Napoles family. Morales confirmed the photo was taken in October. 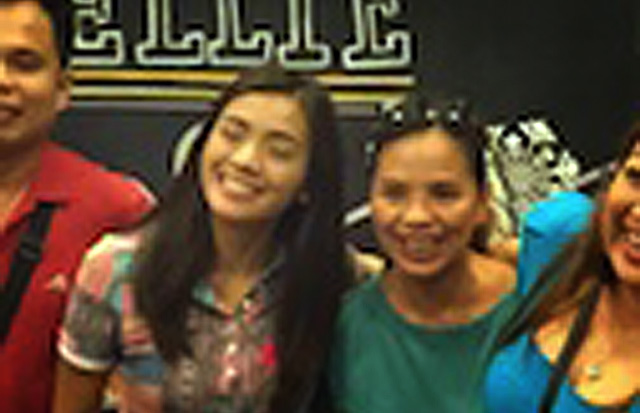 In a phone interview Saturday, March 21, Morales said her daughter is a friend of the birthday celebrant, since she lives in the same apartment complex as Janet and Jojo.

Morales also said she knows Jojo and his wife Anna, but maintained they are only neighbors, adding that she and Anna are “not good friends.” Anna was also charged, along with Jojo, for falsification of public documents in a separate Sandiganbayan case in connection with the ghost delivery of Kevlar helmets to the Philippine Marines in 1998 – believed to be the case where Janet learned the tricks of the trade.

Morales said she was friends with Anna and Jojo even before the story on the Napoleses broke, adding that she only realized they were related to Janet, who she referred to as “Jenny,” when the news reports came out. Jenny is Janet’s nickname among friends. 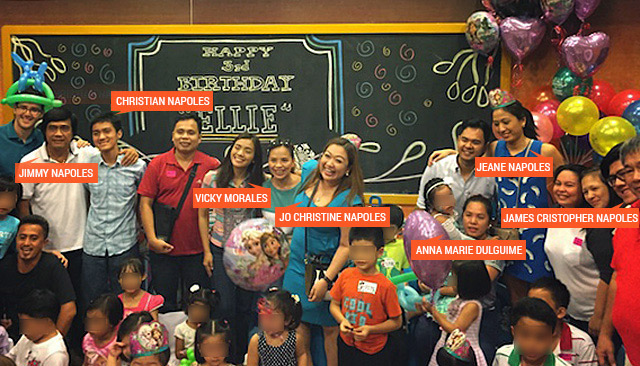 Morales likewise said she wasn’t aware Jeane was back in the country as early as October and that she did not recognize her even if they were in the same party and photo. “I really didn’t know she was there,” Morales said, referring to Jeane.

Stories about the Napoles daughter being back in the country broke last week when the immigration bureau confirmed her arrival. – Rappler.com