Facebook Twitter Copy URL
Copied
If he loses his bid for the vice presidency in 2016, he will remain as senator until his term ends in 2019. He's got nothing to lose.

MANILA, Philippines – Senator Antonio Trillanes has formally declared his vice presidential candidacy – the third to do so among the incumbent members of Senate. Before him, formal announcements were made by Senators Chiz Escudero and more recently, Alan Peter Cayetano.

We all know by now how Trillanes emerged in the political scene – he led the 2003 Oakwood Mutiny to protest corruption in government, particularly the military. He was jailed while facing rebellion charges, but was able to run for senator and managed to win in 2007.

Trillanes was able to enter the halls of the Senate when President Benigno Aquino III granted him amnesty in December 2010. And the rest of his activities have been well-reported since then.

He was reelected to a second Senate term in 2013. If he loses his bid for the vice presidency in 2016, he will remain as senator until his term ends in 2019. He’s got nothing to lose.

But here are other things you need to know about Antonio Trillanes IV.

1. “Poorest” Senator. Among the incumbent senators, Trillanes declared the lowest net worth – P5.55 million in 2014, and P4.91 million in 2013. Assets that he declared include 3 properties in Luzon, one property in Mindanao, and 3 vehicles.

Trillanes was, however, accused of not declaring in his SALN 8 luxury vehicles – all believed to be acquired when he was still in the military. He denied the allegation, and said it was an old issue that had already been dismissed by the Ombudsman.

2. Rescue Operation. Based on his Senate profile, Trillanes was involved in the rescue operations that involved the M/V Princess of the Orient in 1998. The passenger ferry sank near Batangas during a typhoon, killing 150 of its 388 passengers.

Trillanes and his team are said to have rescued 32 survivors.

3. Corruption Paper. Five years after graduating from the Philippine Military Academy (PMA) in 1995, Trillanes took graduate studies in Public Administration at UP Diliman. While taking his masters, he produced two term papers on corruption in the procurements system of the Navy. Both papers were published by the Philippine Center for Investigative Journalism (PCIJ).

In 2011, Trillanes was elected president of the National College of Public Administration and Governance Alumni Association (NCPAG AA).

4. Wife. Trillanes is married to Arlene Orejana, also a PMA graduate. She is one of the 7 female cadets of PMA Class of 1997, and was among the top in the class. She joined the PMA corps of professors and has been stationed there for some time together with their two children.

The couple had a third child – a boy – who died of an illness while he was just 21 days old. 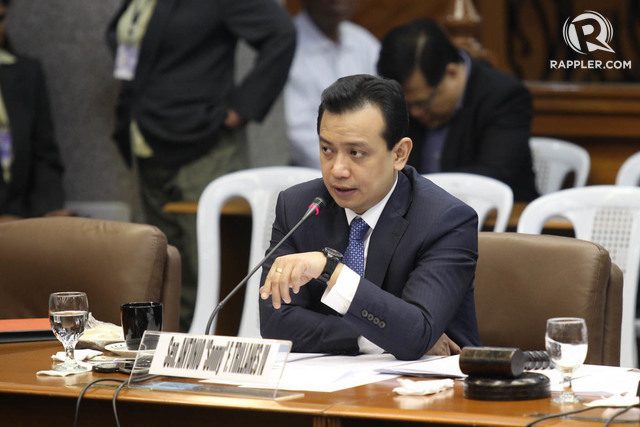 5. Engineering Degree. After high school, Trillanes initially took up BS Electronics and Communications Engineering at the De La Salle University in 1987. But with a few trimesters left, he decided to enter PMA in 1991.

6. Foreign Relations. In 2012, it was revealed that Trillanes was a “backroom” negotiator in territorial disputes between the Philippines and China. Foreign Secretary Albert del Rosario saw this as an act that affected efforts by the government to resolve the standoff.

This is not the first time that Trillanes was involved in the territorial dispute between the two countries. Vera Files reported:

“Incidents of Philippine Navy ships apprehending Chinese fishermen in the vicinity of Bajo de Masinloc is common. In 1999, the Philippine Navy even “accidentally” sank a Chinese fishing boat. But the conflict never went beyond the standard diplomatic protests. Former Foreign Secretary Domingo Siazon recalled one apprehension in 1998 that was a subject of a diplomatic protest by China involving a young navy officer named Antonio Trillanes IV, who would would later on become a senator and play a controversial role in the tension between the Philippines and China over the disputed shoal.”

7. Showbiz. Trillanes is close to movie producer Lily Monteverde. Monteverde helped Trillanes during his 2007 campaign, and even frequently visited him when he was still in prison. The movie producer said that Trillanes was good looking that she was even willing to adopt him as one of her “Regal Babies” – referring to talents under her wing.

Trillanes, however, said he was not inclined to enter showbiz as he has no acting talent to speak of.

8. ‘Good looks’. Senator Miriam Defensor-Santiago might agree with Monteverde. The lady senator was also charmed by Trillanes that she even proclaimed it publicly. After Trillanes delivered a sponsorship speech for his Senate Bill No. 2671, or the Act Strengthening the Career Executive System, Santiago approached the rostrum and said: “I noticed that Senator Trillanes is the youngest and the most handsome senator.”

She even suggested that the senator “would look even better if he attempted to smile once in a while.” – Rappler.com