9 things to know about Jejomar Binay

Oct 11, 2015 10:15 PM PHT
Mara Cepeda
Facebook Twitter Copy URL
Copied
(UPDATED) An orphan, he went to UP, became a human rights lawyer, and was the first chief local executive to be appointed by Cory Aquino after the 1986 EDSA revolt 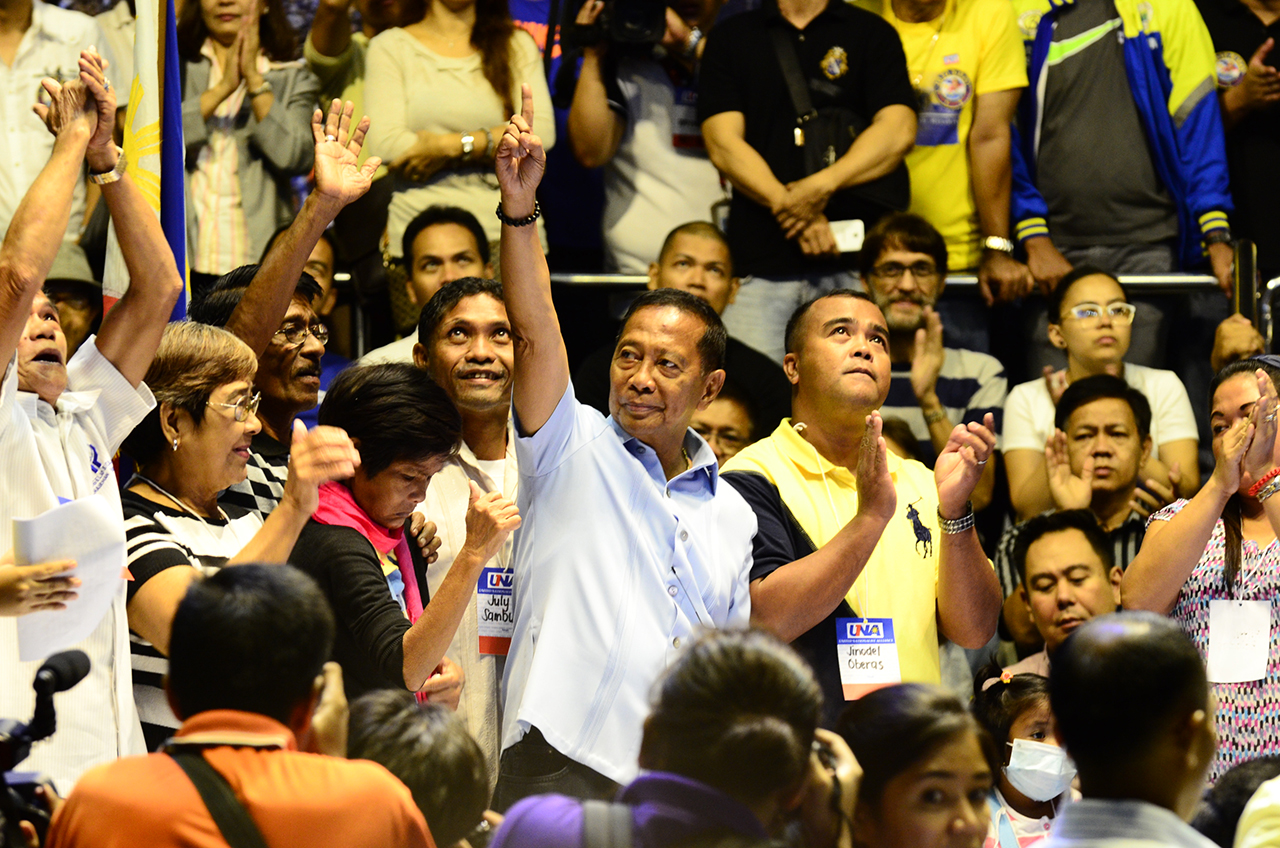 MANILA, Philippines (UPDATED) – Vice President Jejomar Binay was the first politician to declare his bid for the presidency in 2016.

He will be running against Senator Grace Poe, former interior secretary Manuel “Mar” Roxas II, and OFW Family Club party-list Representative Roy Señeres, who all have publicly announced their intention to run for president.

Binay may also face Davao Mayor Rodrigo Duterte and Senator Miriam Defensor-Santiago, who have been hinting at a possible presidential bid.

Prior to being elected as Vice President, Binay served as mayor of Makati City for a total of 21 years. In Makati, Binay is well-loved or criticized, depending on who you ask.

He was also once the chairman of the Metropolitan Manila Development Authority from 1990-1991 and a member of MABINI, a group of lawyers who advocated for the protection of human rights during the martial law years.

The road to the 2016 polls has been a tough road so far for the Vice President, who is the subject of the longest Senate blue ribbon subcommittee investigation over several allegedly anomalous contracts he entered into as Makati mayor.

Binay has since denied the claims, saying that the allegations are political attempts to derail his presidential bid.

While the Senate probe has affected his ratings in public opinion polls, Binay says the accusations he faces only encourages him to “work harder” in hid presidential bid.

Here are other things you need to know about Jejomar “Jojo” Binay.

1. Coming from humble beginnings, he used to live in an area known as a red light district. 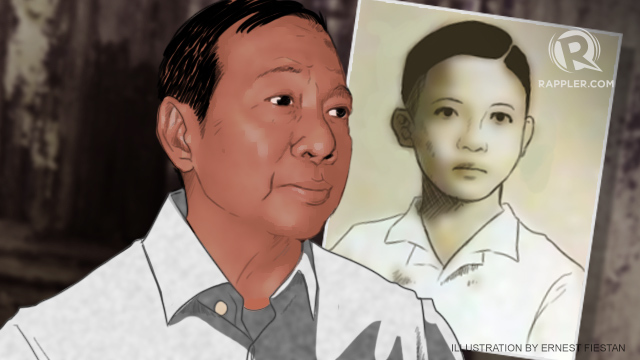 Binay’s childhood story is a narrative he often brings up in his speeches and press statements. After he was orphaned at a young age, Binay lived with his uncle in a seedy area known as Kuli-Kuli in Barangay Pio del Pilar, Makati.

He worked odd jobs to pay for his schooling, including cooking kaning-baboy or pig feed.

When he was studying law, Binay befriended a socialite who was a provincial girl at heart. She recalled that Binay would hitch a ride with her on his way home, but he always asked to be dropped somewhere else. She told Rappler that she later learned that it was because Kuli-Kuli was then the red light district of Makati.

2. He is an Iskolar ng Bayan. Binay is an Iskolar ng Bayan, a term referring to the students of the University of the Philippines (UP) system. For high school, the Vice President graduated from the UP Preparatory School. He then obtained his Political Science degree from UP Diliman in 1962.

The year after, Binay pursued law in the UP College of Law and graduated in 1967. He passed the bar examinations in 1968 and eventually became a human rights lawyer.

3. He often jokes about his dark complexion. Binay’s dark-colored skin has been the subject of several Internet jokes, but the Vice President is known to use his complexion to his advantage.

“Binabati ko ang aking mga ‘cousin’ – mga kasing-itim, kasing-tangkad ni Jojo Binay (I greet my ‘cousins,’ those who are as dark-skinned and as short as me)” is a joke he often cracks in his sorties.

4. When he was courting his wife, he could not even afford to buy her chocolates. 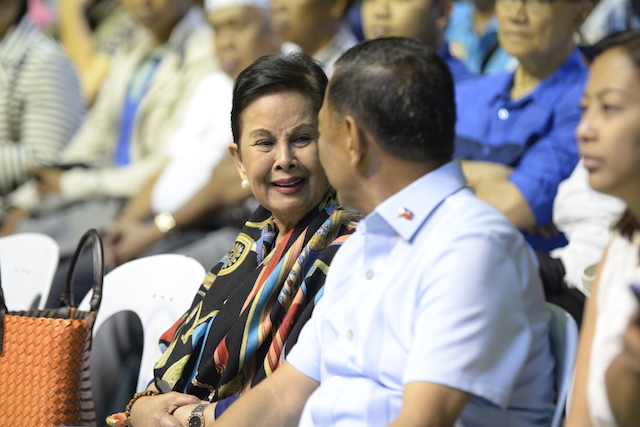 When he appeared before members of the National Unity Party (NUP), he told them that he would woo them the same way he wooed his wife, Dr Elenita Binay.

He told NUP members that he could not even afford to buy her chocolates because he was sending himself to school. Eventually though, Binay said he was able to make Elenita say yes, a feat he proudly shared with the NUP before discussing his plans if elected president.

Three of them hold public office: Nancy is a senator, Abigail is a congresswoman for Makati, while Junjun is Makati mayor, though the Ombudsman recently dismissed him.

5. He was once imprisoned. 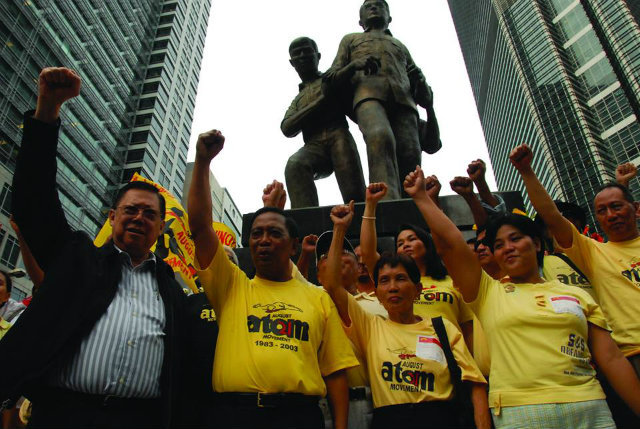 For being among the strongest critics of the Marcos regime, Binay himself was eventually arrested and detained at the Ipil Rehabilitation Center.

Binay was also one of the political allies of former president Corazon “Cory” Aquino and a member of the August Twenty-One Movement (ATOM).

His ties with Cory contributed to Senator Ferdinand “Bongbong” Marcos Jr’s refusing Binay’s offer to be his vice presidential candidate. Ironically, the man behind several coup attempts against Mrs Aquino is now the running mate of Binay: Senator Gringo Honasan.

6. He owes his political break to Cory Aquino. 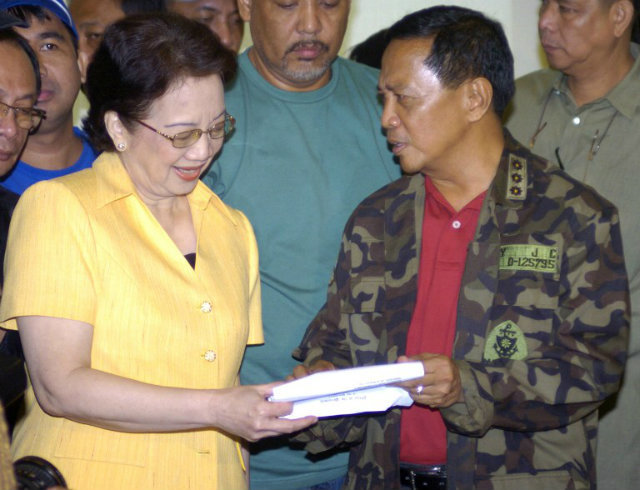 Binay, who has become a critic of President Benigno Aquino III, was the first local executive to be appointed by Cory after the EDSA Revolution. He was elected mayor of Makati two years later.

Binay also earned the moniker “Rambotito” for wearing army fatigues and lugging an Uzi submachine gun during several coup attempts against Cory during her 6-year term from 1986 to 1992.

7. Binay topped election surveys, then lagged behind for a few months, then is back on top 4 months before the elections. Before the start of the Senate probe on the corruption allegations against him and members of his family, Binay led the election surveys by a wide margin.

In Pulse Asia’s Ulat ng Bayan Survey for March 19-26, 2014, 40% of the respondents chose Binay as their top choice for president. Senator Grace Poe, who at the time had not declared her interest to run, was a distant second at 15%. Roxas trailed behind them at 6%.

More than a year later, the tables have turned: Poe leads at 26%, followed by Roxas at 20%. Binay’s rating was close to that of the Liberal Party standard-bearer at 19%, but Duterte is a close 4th at 16%.

However, Binay’s strategy of silence and his focused campaign on ending poverty in the country made him a survey frontrunner again. Binay was the man to beat in the Pulse Asia Survey in December 2015 with 33%.

In January 2016, just 4 months before the elections, Binay remains on top with 31% in a Social Weather Stations pre-election survey.

9. Binay is a controversial political figure. Prior to the corruption allegations thrown in the Senate, Binay faced other controversies.

In 2006, for example, Binay, who at the time was still Makati mayor, was handed a 60-day preventive suspension order, along with then-vice mayor Ernesto Mercado and all city councilors for supposedly padding city hall’s payroll with “ghost” employees. 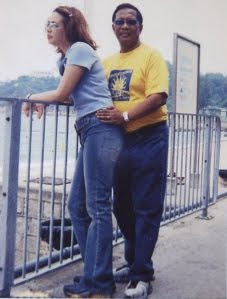 A temporary restraining order from the Court of Appeals stopped the suspension, but not before Cory Aquino and other political allies of Binay trooped to city hall to show their support for the former Makati mayor.

The suspension was seen as political harassment from Malacañang because Binay used to lead the protests against the president at the time, Gloria Macapagal-Arroyo.

The following year, the Bureau of Internal Revenue (BIR) froze all bank accounts of the city government as well the personal accounts of Binay and Mercado because the city allegedly owed the BIR P1.1 billion in withholding taxes of city employees from 1999 to 2002.

The BIR had also issued a warrant of garnishment against the said bank accounts. The garnishment orders were eventually lifted by Malacañang.

These controversies did not stop Binay’s victory in the 2010 vice presidential race. – with reports from Michael Bueza/Rappler.com