MANILA, Philippines – November 23, 2015, marks the 6th year since 58 people were killed in the Maguindanao massacre, the country’s worst case of election-related violence.

The 2009 massacre was allegedly hatched because of the bid of Esmael Mangudadatu to run for governor against Andal Ampatuan Jr, a member of the powerful Ampatuan clan of Maguindanao.

What was supposed to be a simple trip to the provincial capitol to file Mangudadatu’s certificate of candidacy turned into tragedy when the convoy bearing members of his family, supporters, and the media was attacked. A total of 58 people were killed in Sitio Masalay, Barangay Salman, Ampatuan, Maguindanao.  (INFOGRAPHIC: Maguindanao massacre case, 5 years on)

The incident is also considered as the single deadliest attack against the media, according to the Committee to Protect Journalists (CPJ), as the victims included 32 journalists.

Six years on, the families of the victims have yet to get justice. There have been no convictions, so far, in connection to the case wherein 198 people have been charged.

Rappler lists down the critical events in relation to the Maguindanao massacre trials in 2015.

1. The death of Andal Ampatuan Sr The Ampatuan clan patriarch, the alleged mastermind of the massacre, was confined at the National Kidney and Transplant Institute since June 2015 following a court decision to grant him hospital arrest.

His death, however, will not stop the victims’ kin from demanding justice. One of the widows of the 58 victims told Agence France-Presse that the elder Ampatuan “should have paid for his sins in jail.” (READ: Massacre widows ‘cannot forgive’ Ampatuan Sr)

Meanwhile, Sajid Ampatuan vowed that the death of his father is not the end of their clan’s rule in Maguindanao. The Department of Justice started the probe of 50 new suspects with a preliminary investigation in March this year.

The second wave of suspects included town mayors and 14 members of the Ampatuan clan.

The complaints, filed in January, were based on the testimonies of witnesses presented in court in the course of the Maguindanao massacre trials. 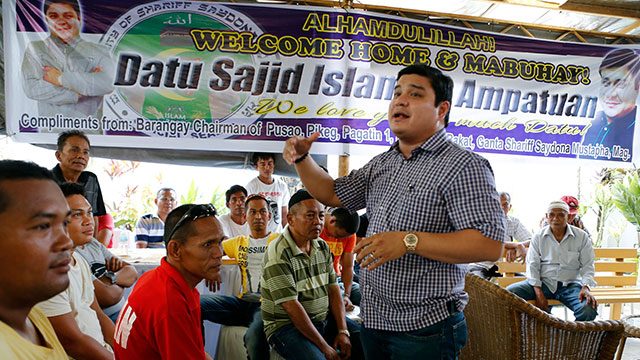 The Quezon City Regional Trial Court released this year some decisions on the appeals for temporary liberty made by the primary suspects.

Judge Jocelyn Solis-Reyes granted Datu Sajid Islam Ampatuan temporary freedom in January, as the prosecution failed to present strong evidence warranting his detention during trial. She added that the son of Ampatuan Sr was only present in meetings regarding the incident, but did not participate in the discussions.

He is set to run for mayor of Sharrif Aguak, the clan’s bailiwick, after filing his certificate of candidacy in October.

In 2014, 42 policemen charged in relation to the Maguindanao massacre were allowed to post bail. In April, months before his death, Ampatuan Sr’s plea for temporary freedom was denied after the court found that he “called and presided” over the discussions with details “reminiscent of the scheme” used in the gruesome massacre.

In September, the court denied the bail petition of Ampatuan Sr’s other son and one of the main accused, former Autonomous Region in Muslim Mindanao (ARMM) governor Zaldy Ampatuan.

The court cited the “strength of the evidence” the prosecution presented as reasons behind the decision. The Supreme Court (SC) affirmed its October 2012 decision against live media broadcast of hearings related to the Maguindanao massacre.

In its decision released in January, the Court denied the 3 motions for reconsideration of the following: Widows Editha Mirandilla-Tiamzon and Glenna Legarta, the National Union of Journalists of the Philippines, and President Benigno Aquino III through the Office of the Solicitor General. (READ: It’s final: No live coverage of Maguindanao massacre trial)

According to SC spokesperson Theodore Te, the High Court cited the “need to protect the rights of the parties and the dignity of the courts.”  The SC also took into account in its decision the common practice of foreign jurisdictions not to allow cameras in the courtroom.

The 2012 decision was in response to the motion for reconsideration of Ampatuan Jr’s camp to bar live coverage, stating that it has “prejudicial effects on the rights of the accused individuals.” It was a reversal of the SC’s first ruling in 2011, which allowed live coverage but required media organizations to broadcast continuously without cuts, among other restrictions.

6. Sereno and De Lima’s take on the trial’s pace When asked during a business forum in March if the judiciary can make the trial go faster, Chief Justice Maria Lourdes Sereno said the handling of the trial is already “expedited at the maximum.”

Meanwhile, in an interview on the ABS-CBN News Channel in October, then Justice Secretary Leila De Lima said she remained confident that there will be some convictions made before June 2016, or before the end of the Aquino  administration.

But Reynafe Momay-Castillo, daughter of Reynaldo Momay, the 58th Maguindanao massacre victim, said the families of the victims will believe such statements made on the case once there are results.

(I’ll believe it when something actually happens. There have been a lot of promises  made in this case but as usual, nothing has materialized. The justice system in the Philippines is so frustrating.)

Will 2016 finally be the year when the 58 families achieve their long-awaited justice and closure? – Rappler.com