IN NUMBERS: The state of the nation’s marital woes Facebook Twitter Copy URL
Copied
Happy ever after does not happen for everyone. Statistics from the Office of the Solicitor General (OSG) show us the state of the nation’s heartbreak.

MANILA, Philippines – What do numbers from the Office of the Solicitor General (OSG) show about the state of marital affairs in the country?

Since 2001, the number of annulment and nullity cases filed has been increasing. The latest available figures for the current year showed there were already more than 6,000 cases filed; the number of cases in 2015 will most likely exceed the number filed in the previous year. 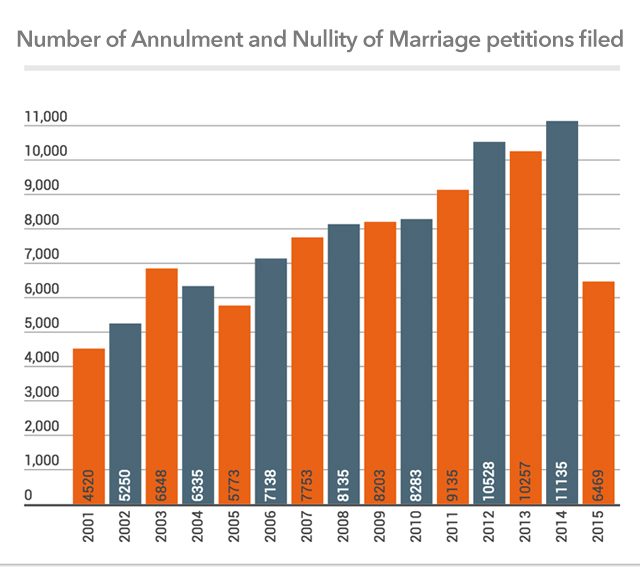 The OSG’s sampling of 2013 data showed that more females initiate the filing of annulment or nullity proceedings. There is no specific profession that dominates the list of those filing for annulment. Business people, employees, school teachers, OFWs.There is no available data on income bracket of respondents. A random sampling of 2008 cases revealed that the petitioners were between the ages of 21-25 and had been married between 1-5 years. Also based on randomly selected data from 2010 and 2011, 94% of the cases filed were granted, while 6% were denied or dismissed by the court. Source: Office of the Solicitor General