On Grace Poe’s trail: Where did she go? What did she do? MANILA, Philippines – Presidential aspirant Senator Grace Poe used to be the presidential polls front runner even before she declared her presidential bid in September. But things have changed with the disqualification cases against her and the entry of Davao City Mayor Rodrigo Duterte.

Poe enjoyed positive media coverage and reviews from the public in June, after she led the Senate investigation into the botched Mamasapano incident.

In the committee report, Poe said President Benigno Aquino III, the person who appointed her as Movie and Television Review and Classification Board chairperson in 2010 and who helped her win in the 2013 senatorial elections, was responsible for the incident.

In September, Poe continued to top presidential preference surveys. At the time, Poe was very persistent on investigating the poor state of the public transport system, particularly the Metro Rail Transit 3 or the MRT. While the investigation started in 2014, public outcry against government officials grew stronger after continuous accidents involving the MRT.

It was also at this point when Poe, chairperson of the Senate committee on public services, quietly rode the MRT to experience the daily plight of Filipino commuters.

The Pulse Asia surveys in June and September showed that while Poe continued to be the top presidential choice, her real ratings or actual numbers have gone down – from 30% in June to 26% in September.

The Pulse Asia and Social Weather Stations surveys in December showed a similar, or even worse, fate for Poe.

The Pulse Asia poll, which Vice President Jejomar Binay topped, showed Poe’s numbers dropping to 21%, trailing behind Binay with 33% and Duterte with 23%. (READ: Binay the man to beat in Pulse Asia survey)

Click or hover over the number to read about Poe’s visits. Note that the events are labeled in chronological order. 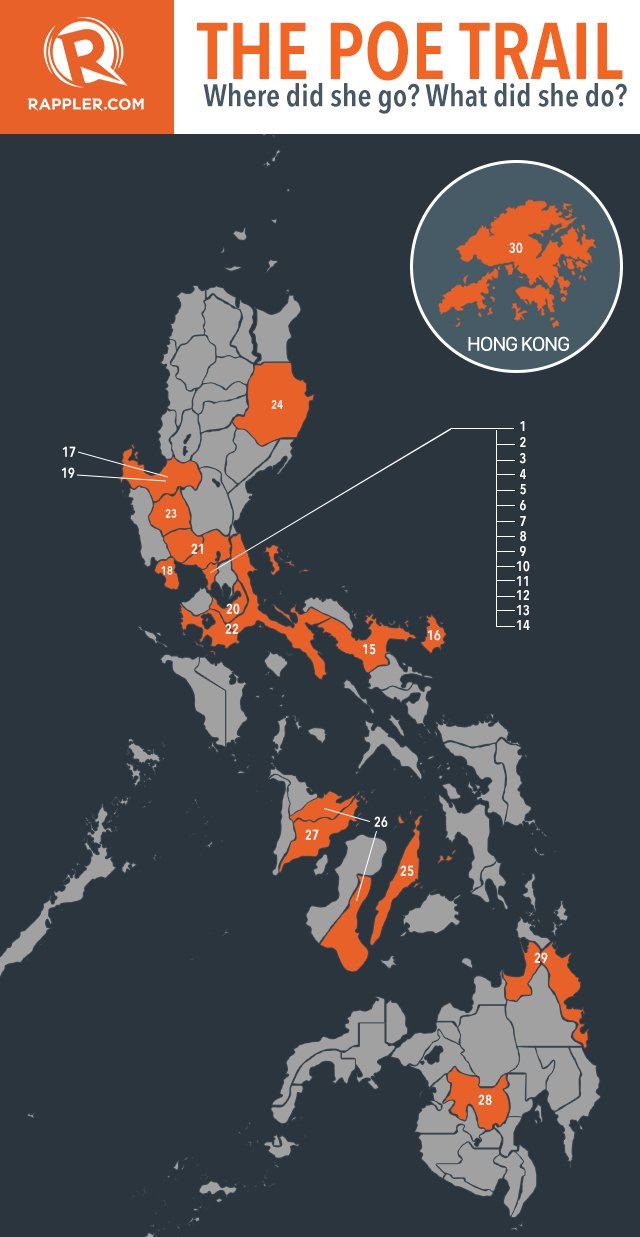 In the National Capital Region, Poe was the most preferred presidential bet in September. By the month of December, however, she ranked only third in Metro Manila, after Binay and Duterte. This was when the Comelec divisions ruled to disqualify her from joining the 2016 race.

Poe declared her presidential bid on September 16 at the Bahay ng Alumni at the University of the Philippines-Diliman. The following day, Poe endorsed Senator Francis Escudero as her running mate at the Club Filipino in San Juan.

On October 13, Poe met with the transport and commuter sector in Quezon City. Two days after, Poe and Escudero filed their certificates of candidacy at the Commission on Elections in Manila.

On October 29, the two revealed their complete senatorial line-up at the Club Filipino.

On November 16, Poe was the guest speaker at the 1st ever International Symposium on Moringa in Pasay City.

On November 22, she was also the guest speaker at the oath-taking of successful examinees or the new Certified Public Accountants in Pasay City.

The following day, she had dinner with members of the Wallace Business Forum in Makati.

On November 25, Poe attended a presidential forum organized by Filipino alumni of US-based schools such as Wharton, Kellogg, and Harvard at the Manila Polo Club. Only Poe and Roxas attended the event.

On December 2, she joined another forum organized by GoNegosyo at Solaire Resort in Parañaque City.

On December 7, she was the guest speaker at the National Convention of Government Employees.

On December 16, she inaugurated the headquarters of the Grace Poe Movement for President in Quezon City.

On December 18, she attended a migrant workers forum organized by the Migrante party list, part of the Makabayan bloc that supports the Poe-Escudero tandem, at the University of the Philippines Diliman.

On October 23, Poe went to Virac in Catanduanes province to attend the Provincial Board Members League in Region 5 or the Bicol Region.

On October 26, Poe went to Calasiao, Pangasinan to conduct relief operations for the victim of Typhoon Lando (international name Koppu). At the time, Poe had been to the vote-rich province at least thrice already.

On November 6, Poe went to Subic and Bataan to meet students and do radio interviews.

On November 11, Poe went back to Pangasinan, the province where her father, the late action star Fernando Poe Jr, was born, to receive an honorary degree from the University of Luzon.

On November 17, Poe visited the University of Perpetual Help school in Biñan, Laguna. This was where she found out about the favorable decision of the Senate Electoral Tribunal.

On November 19, Poe visited schools and local media in Malolos, Bulacan and Pampanga, together with some of her senatorial bets.

On November 27, Poe visited Lucena in Quezon and Lipa in Batangas to do radio interviews, hold press conferences, and meet students.

On December 11, Poe visited Tarlac city, a bailiwick of the administration. She did radio interviews, held press conferences, and attended a summit on peace and security with local officials. It was here where she found out about the disqualification ruling of the 1st division of the Comelec.

The following day, Poe went to Cauayan City in Isabela to meet students and attend a leadership summit. She was welcomed by Nationalist People’s Coalition president and Isabela Representative Giorgidi Aggabao.

Poe’s ratings are relatively low in the Visayas region. After all, it is a known bailiwick of the administration and their bet Mar Roxas.

Prior to her declaration in September, Poe had already visited the vote-rich Cebu city twice. In 2013, Poe belonged to the top 5 senatorial bets in the city and in the whole province.

On October 1, Poe again went to Cebu City to meet with students and local media. Afterwards, she went to Danao City in the 5th district of the province to meet with the Durano family and their local Bakud party.

On October 9, Poe went to Dumaguete to meet with students. She then went to Capiz, one of the strongholds of Roxas.

Two months after, on December 10, Poe returned to Iloilo, her supposed birth province. She led a Senate investigation into the alleged break-in in a local radio station. It is also where she met with the nephew of the man who found her. Poe’s supposed family members also met with her. Now, they are awaiting results of the DNA tests.

In 2004, Mindanao was a known bailiwick of Poe’s father FPJ. But the 2016 elections may prove to be different, as Davao City Mayor Rodrigo Duterte has strong support in the region. Poe’s ratings in the region have declined from 20% in September to only 10% in December.

On October 2, Poe went to Cotabato and Butuan cities to visit schools, do radio interviews and meet with the local press.

On December 4, Poe went to Tandag City in Surigao del Sur and met students of Surigao State University. Poe and Escudero also took the opportunity to visit a community of Lumads and listened to their woes and requests.

On December 25, while on vacation with family, Poe visited Hong Kong and supposedly chanced upon hundreds of Overseas Filipino Workers at a gathering in Central, which was apparently organized by Migrante International. Poe then made a speech and wooed OFW voters in the country.

On December 27, Poe attended a mass at St Joseph’s Church, where many OFWs hear Mass every Sunday. – Data visualization by Nico Villarete/Rappler.com